@bonifacemwangi
My brother @sidoman came all the way from Mombasa yesterday so that we could catch up. He runs @Africansalihiya, they deliver cargo from over 20 cities across the world and into East Africa — Kenya, Uganda and Tanzania. Give him your cargo business, he delivers efficiently. 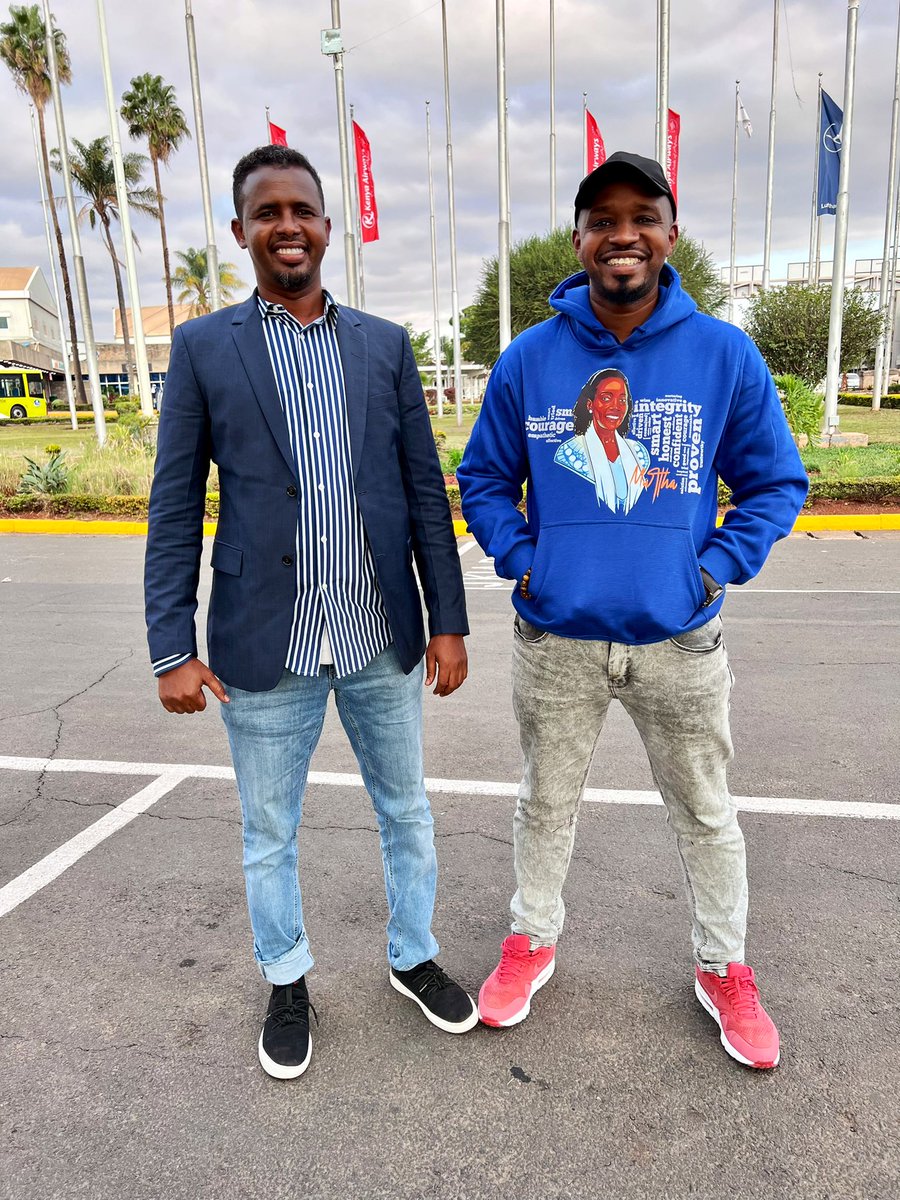 @bonifacemwangi
I’m so excited. Incoming President @RailaOdinga and his deputy @MarthaKarua have a solid plan to turn Kenya around. Behind the scenes are solid technocrats, upright citizens with solid experience who shall ensure their manifesto is implemented. I’m optimistic! #FirimbiMovement 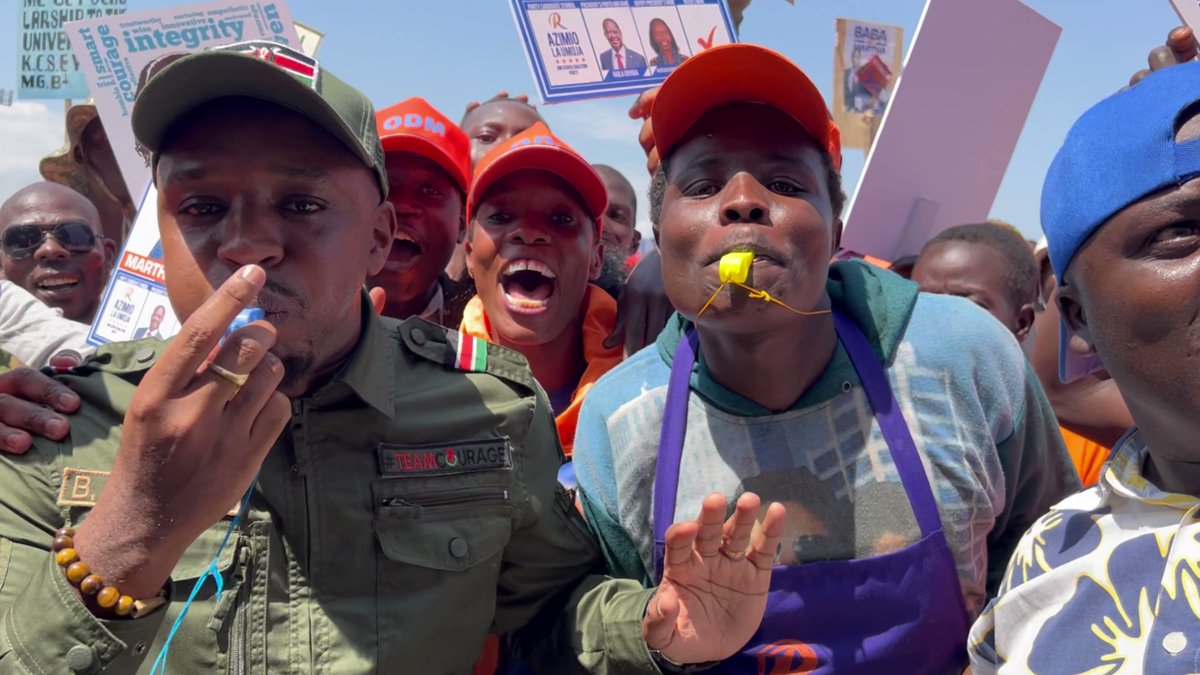 @bonifacemwangi
"I'm absolutely confident that for two years if every nation on earth was run by women, you would see a significant improvement across the board on just about everything...living standards and outcomes."-President Barack Obama Vote for two transformative leaders #VoteBabaNaMartha 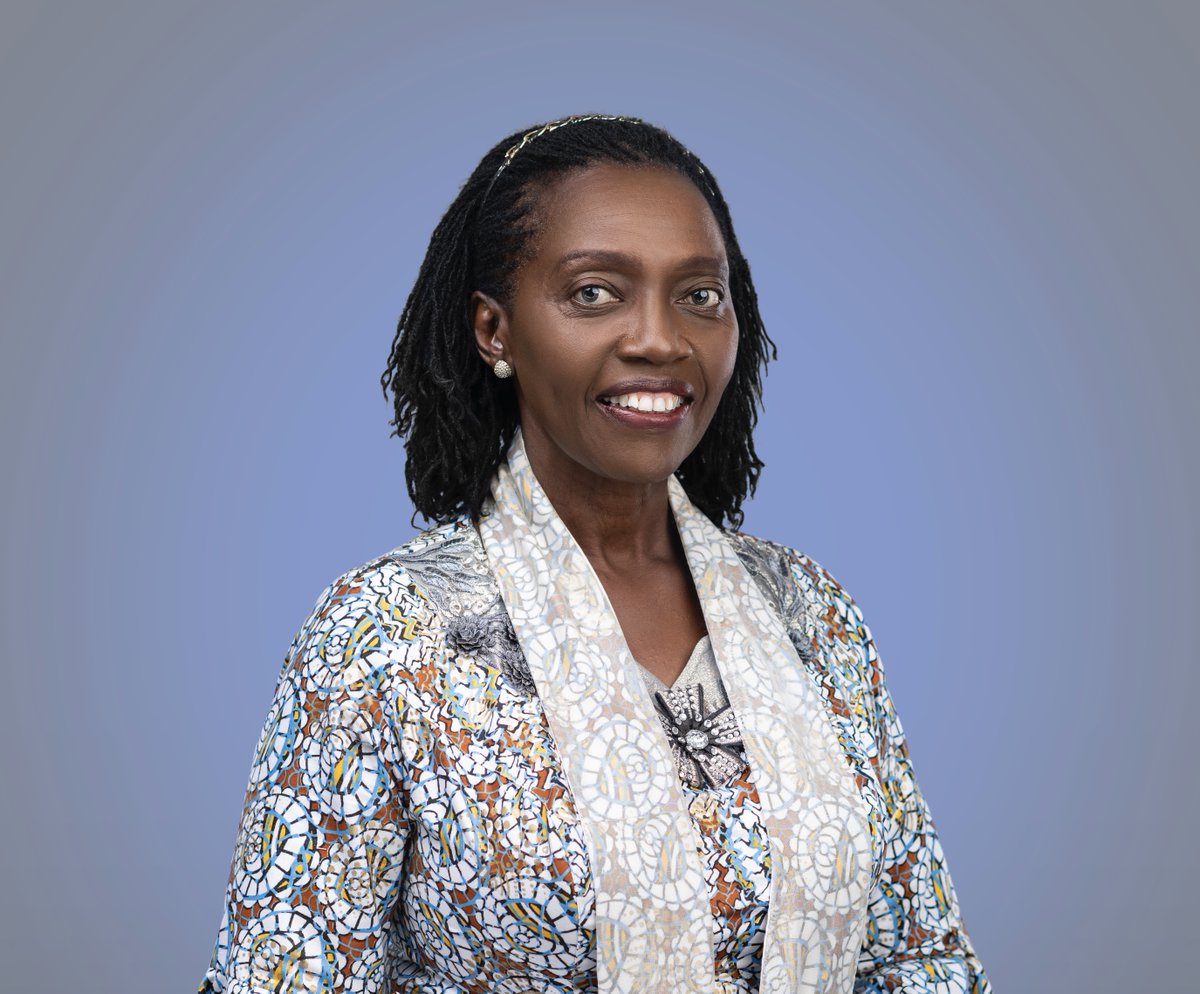 @bonifacemwangi
Thank you Yurop for the hospitality. We shall be back soon to celebrate #BabaNaMartha presidential win. #VoteBlue 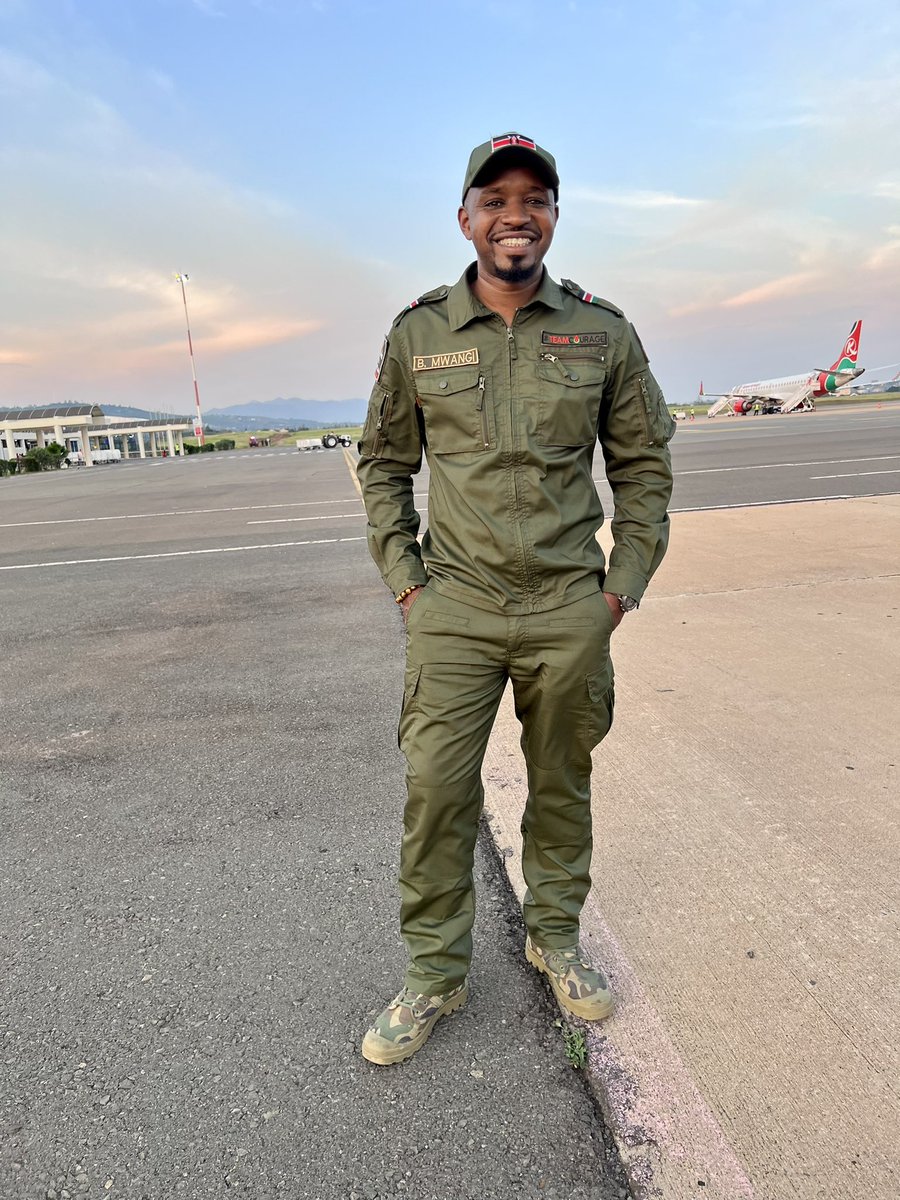 @bonifacemwangi
The ecstatic mood at Mamboleo grounds this afternoon. The young people who are gathered here have a lot of hope in @RailaOdinga and @MarthaKarua. Their first 100 days in office will be a sprint, reduce cost of living, fight corruption properly and create jobs. #VoteBabaNaMartha 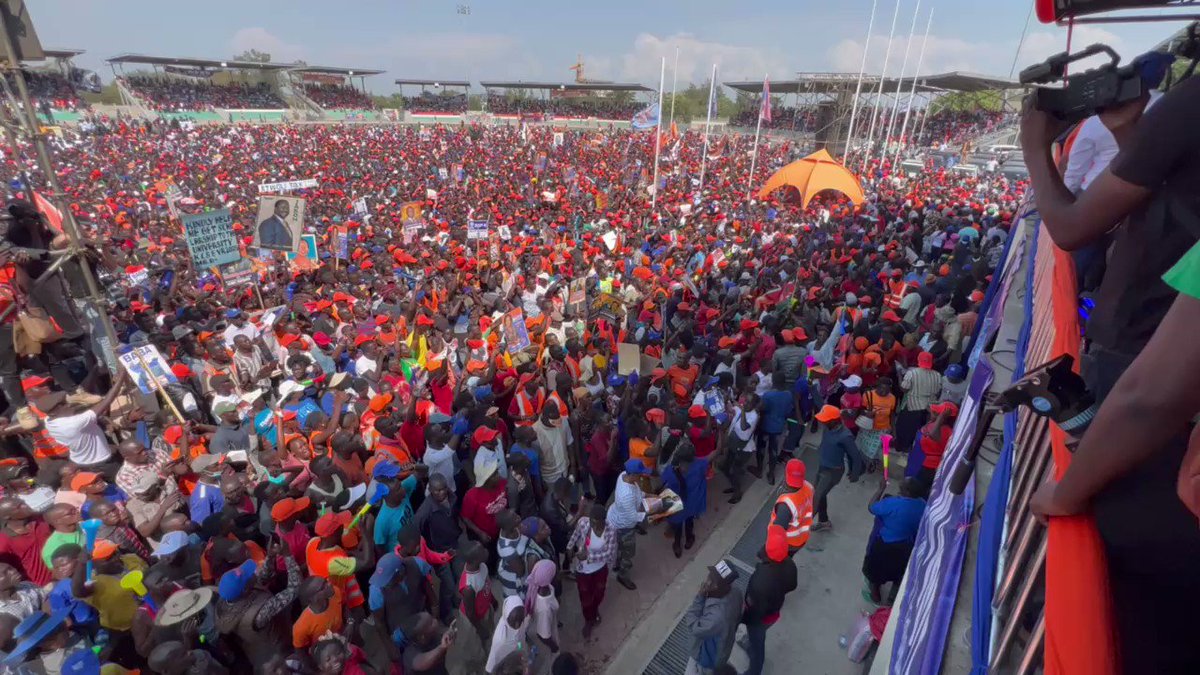 @bonifacemwangi
Happy to distribute @MarthaKarua placards in Kisumu city. The excitement in the air is palpable. #VoteBlue #VoteBabaNaMartha 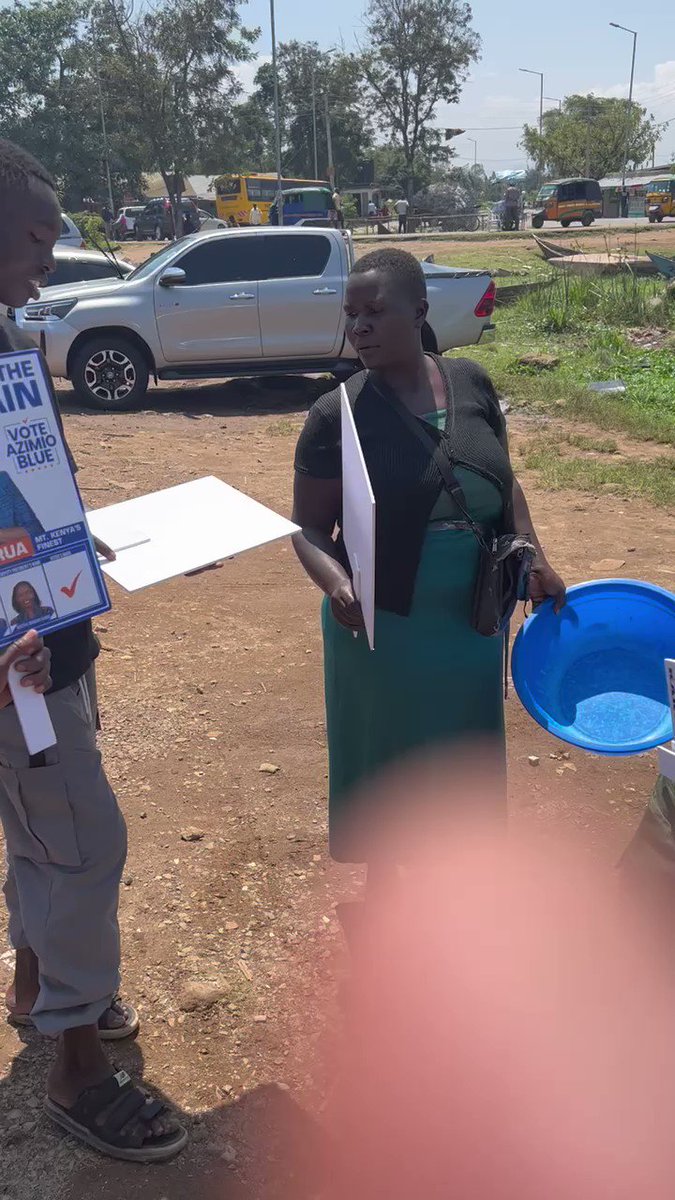 @bonifacemwangi
Double Olympic champion Ezekiel Kemboi with a fan at Dunga Beach. Kemboi has publicly endorsed @RailaOdinga and @MarthaKarua for the presidency. We are in Kisumu to attend #BabaNaMartha major rally at Mamboleo showground. #VoteBlue #VoteBabaNaMartha 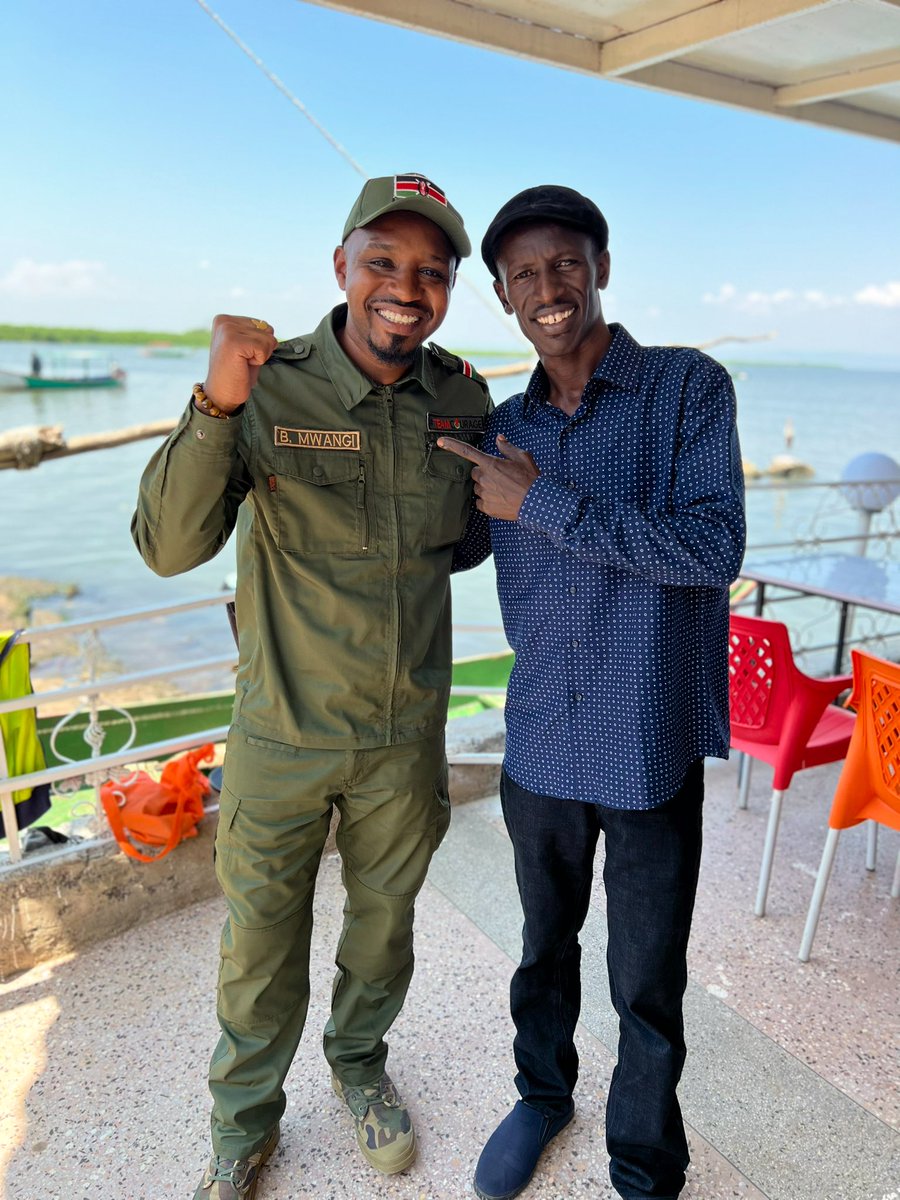 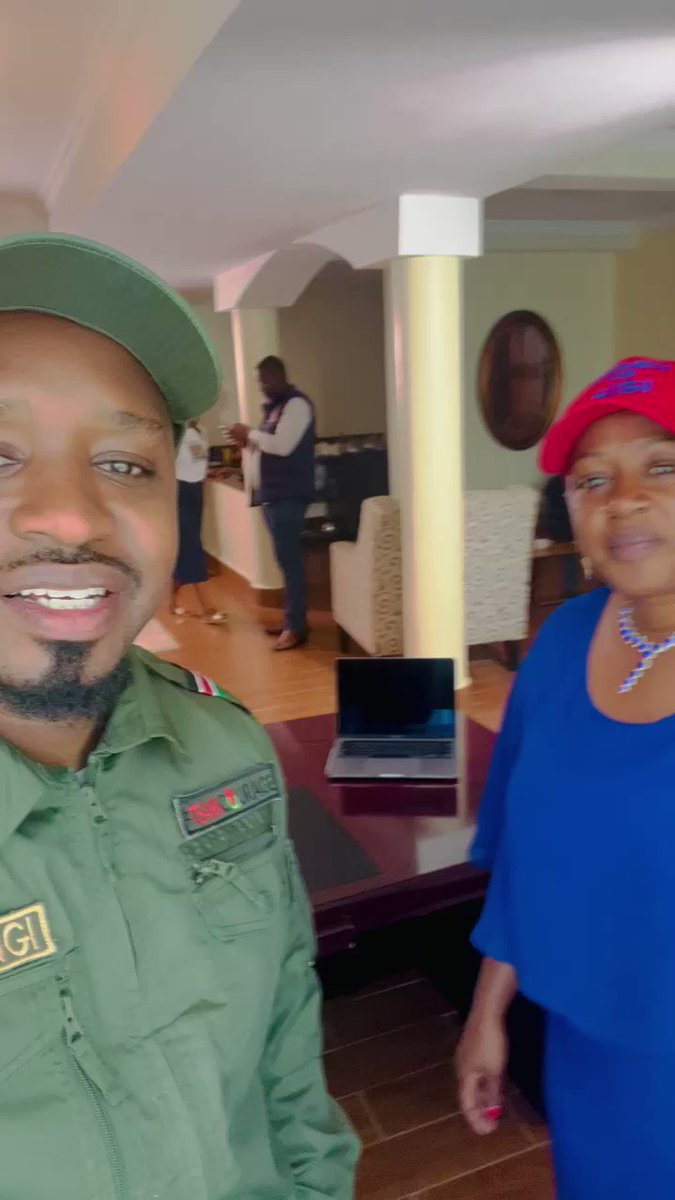 @bonifacemwangi
"Boniface Mwangi, a photographer with The Standard is the CNN African Photojournalist Of The Year— the first Kenyan to win in the category."- @StandardKenya August 1, 2008. I went on to be runners-up in 2009 and won again in 2010. Here I am 14 years later. Trust the process. #tbt 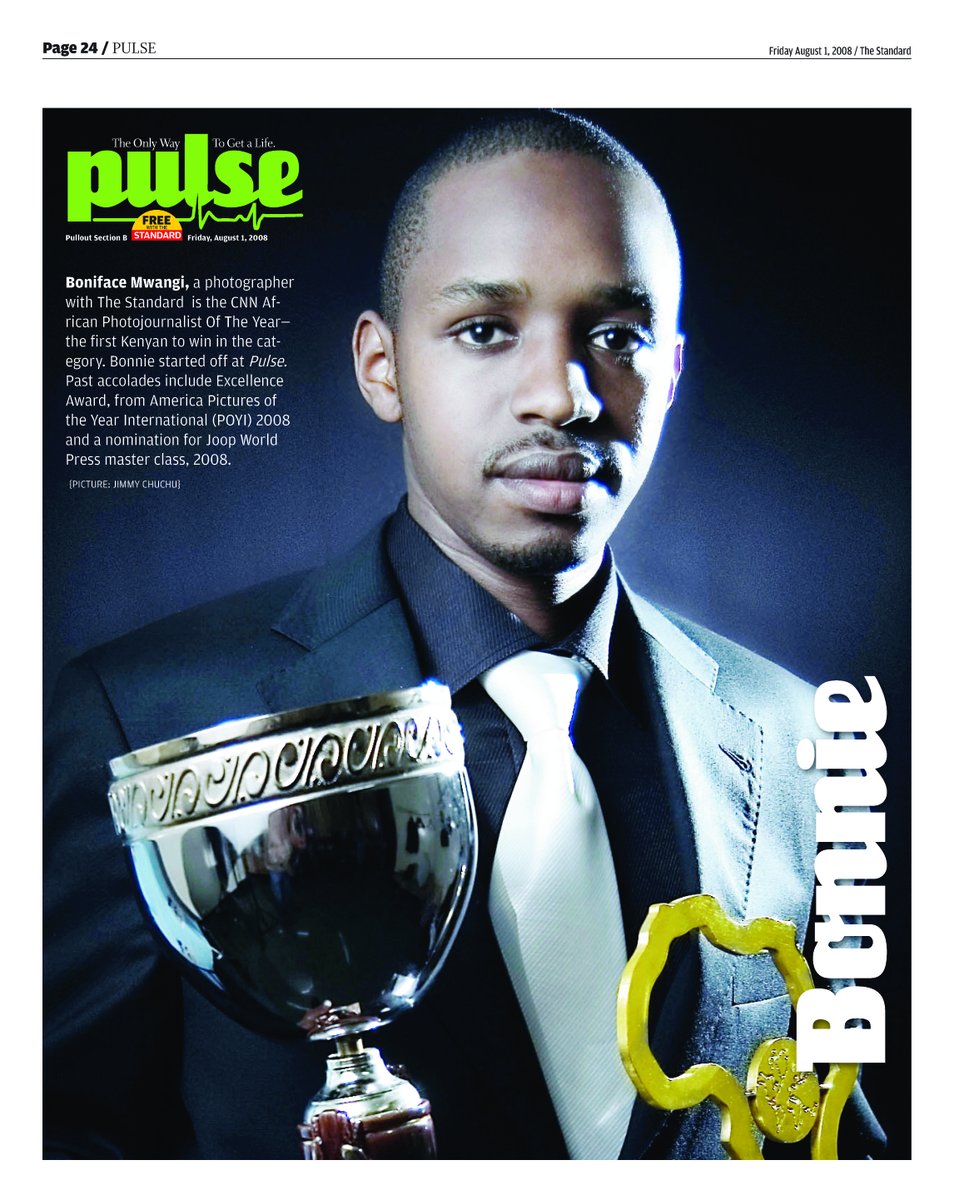 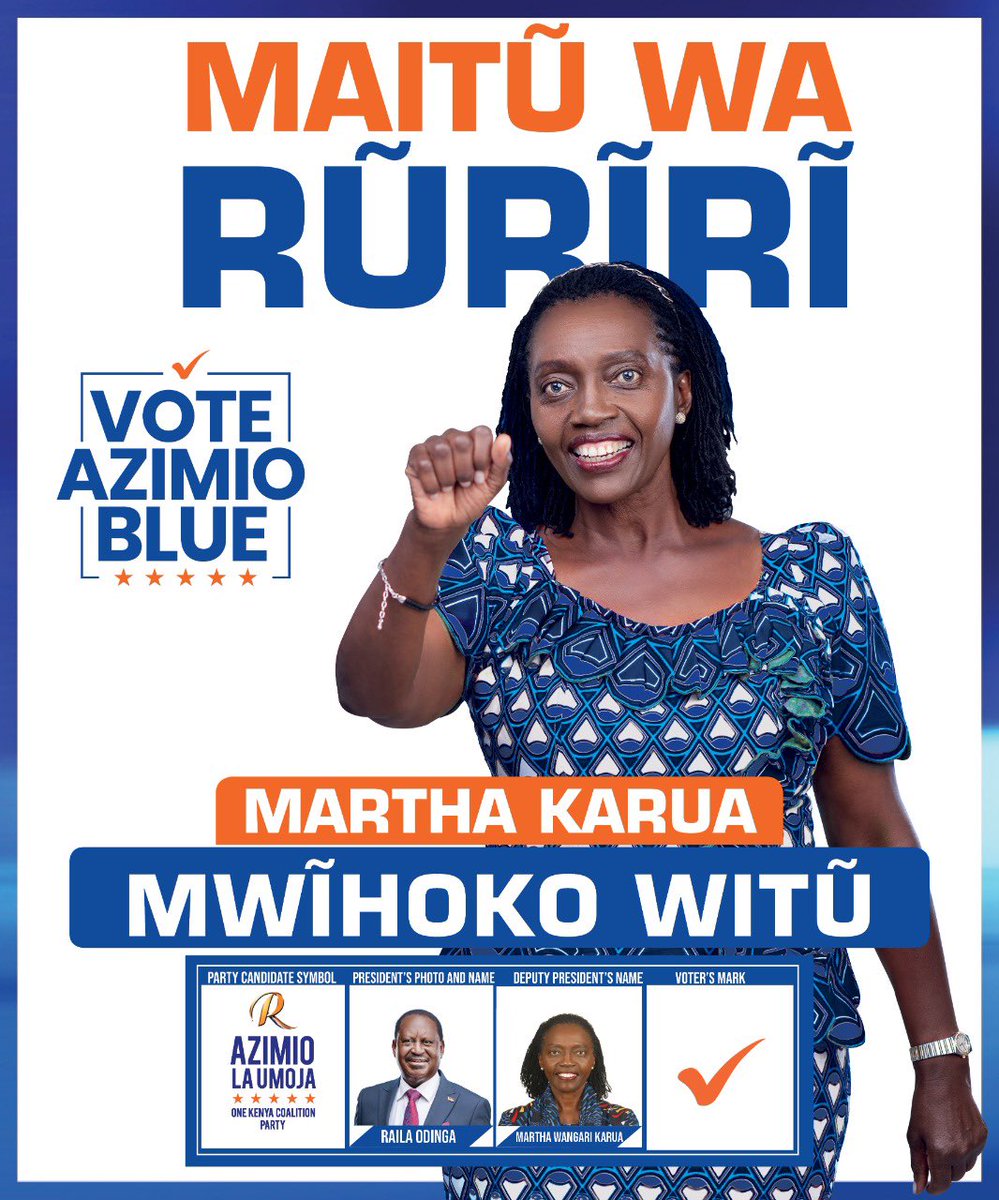 @bonifacemwangi
This song is a song of blessing and says: 🎵🎶May you have many days of grace, Many days of respect, May your streams never run dry, May your cattle always give you milk, And may your pastures thrive 🎵🎶 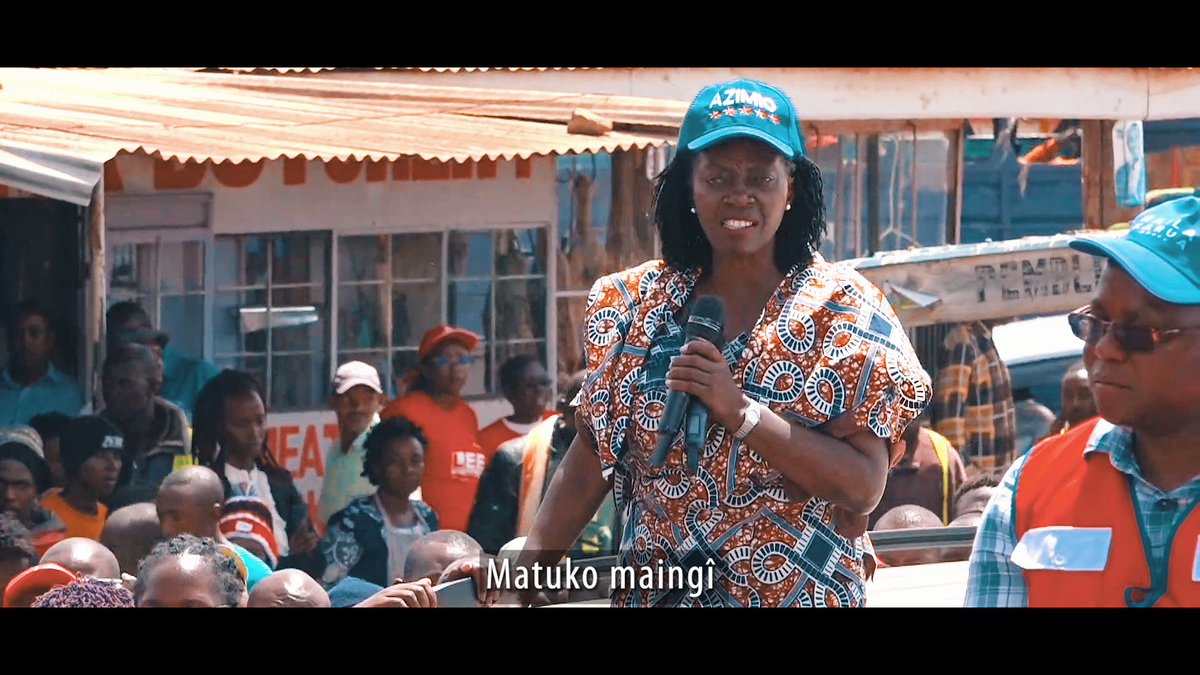 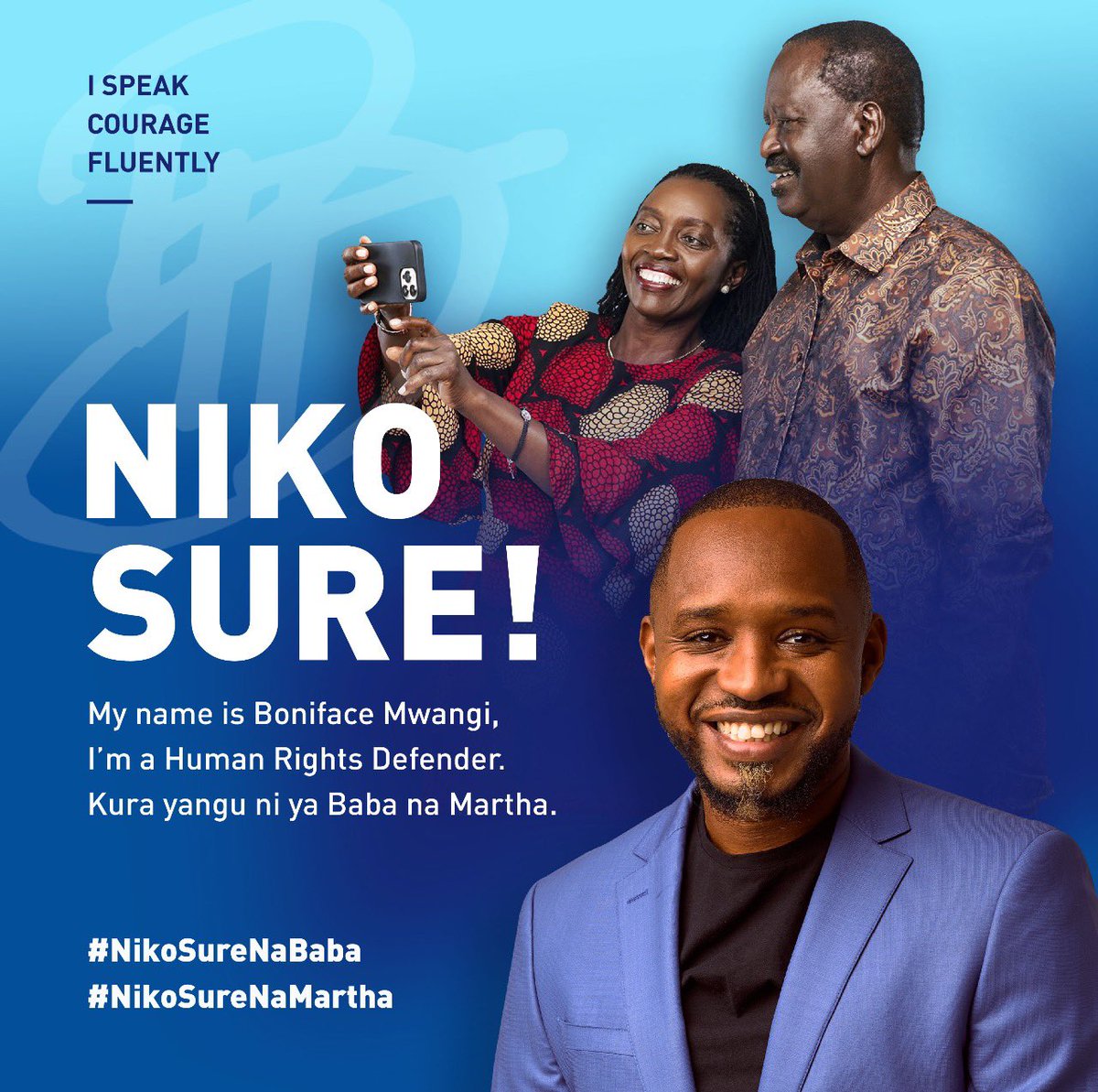 @bonifacemwangi
“I want to remind Kenyans that this election is about trust. Which team can you trust? We offer a track record. We are asking you to critically examine the teams” ~ @MarthaKarua #VoteBlue | #VoteBabaNaMartha 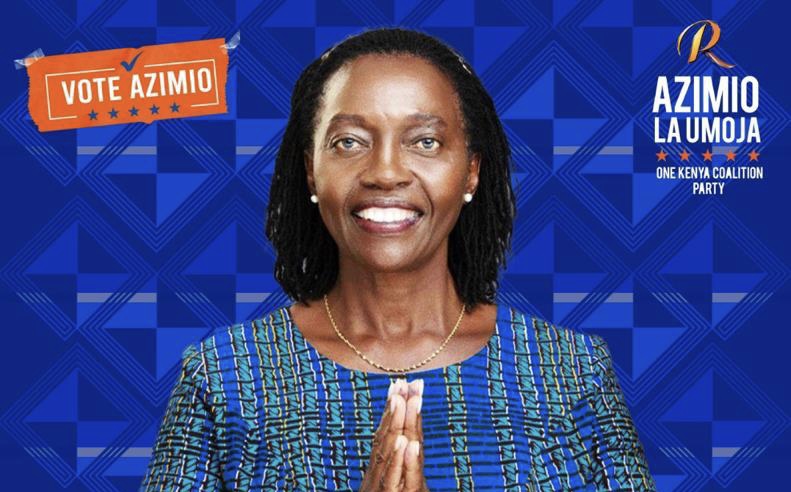 @bonifacemwangi
One of the things that l have learnt from my mentor Dr. Willy Mutunga is that your oppressors aren’t your teachers. Just because team yellow is playing dirty and sharing fake videos and audio doesn’t mean team blue should do the same. We are better than that. Let’s win clean.
02 Aug, 2022 - 06:42 PM UTC

@bonifacemwangi
Even school children know who they can trust! #VoteBlue #Inawezekana 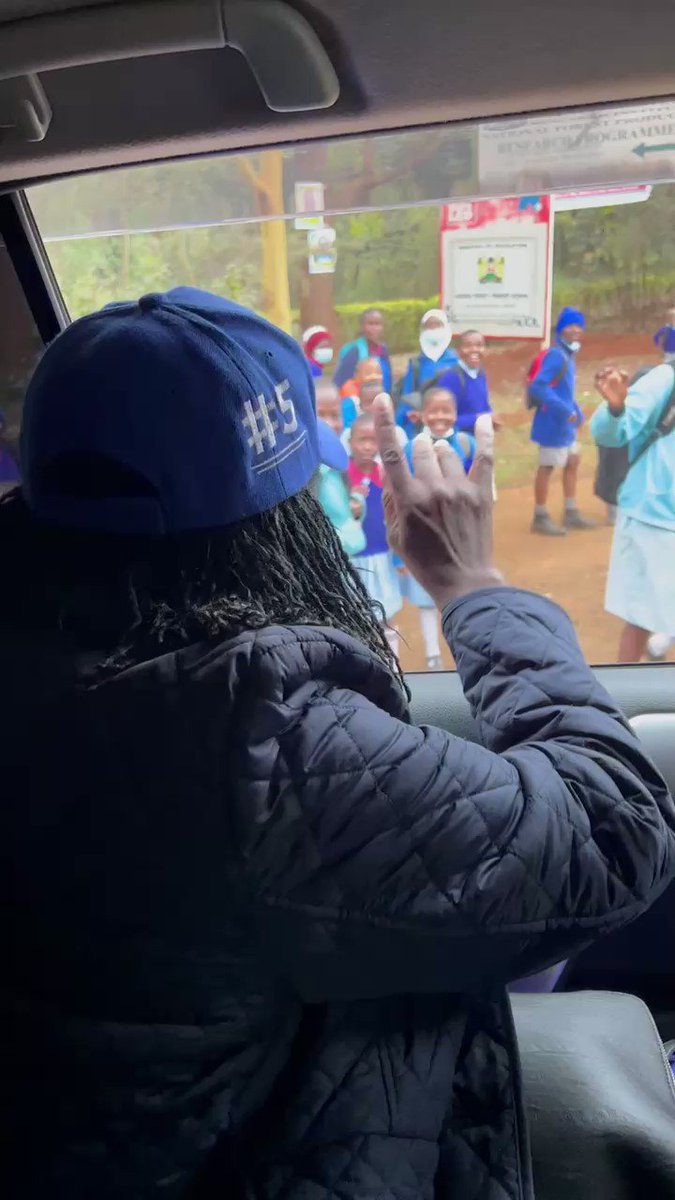 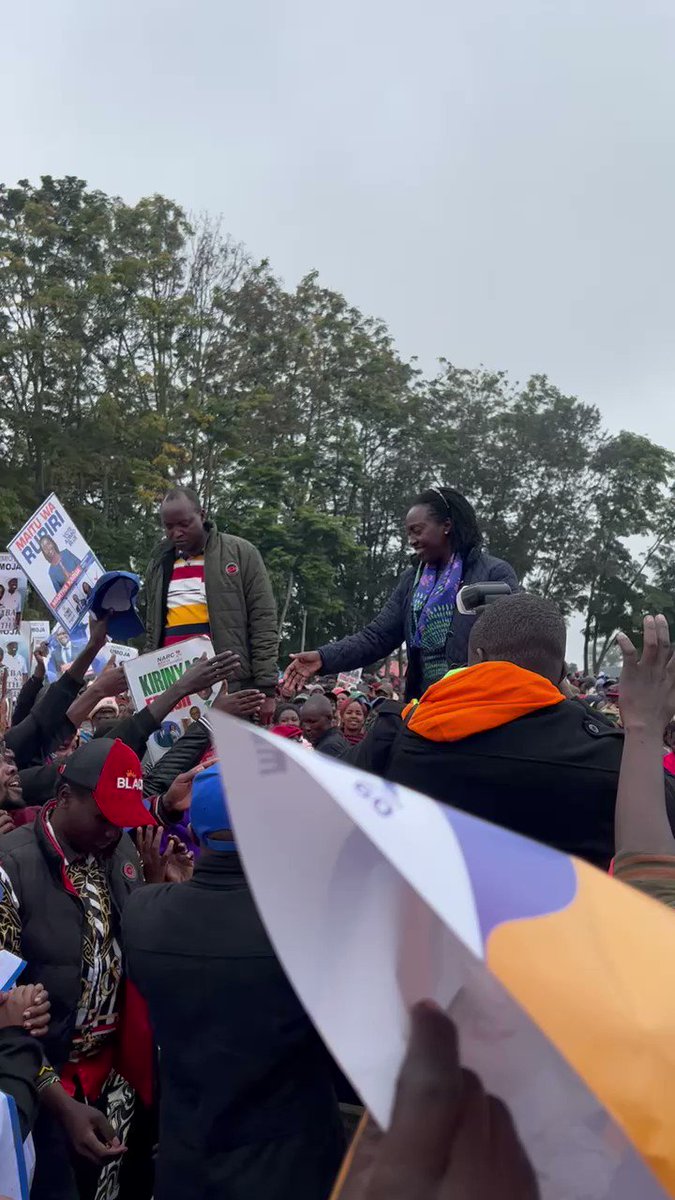 @bonifacemwangi
Good morning from Kirinyaga county where incoming Deputy President @MarthaKarua will be hosting the incoming 5th President of Kenya @RailaOdinga today. We shall elect a government of the people, by the people and accountable to the people. I’m an optimist. #VoteBlue #Inawezekana 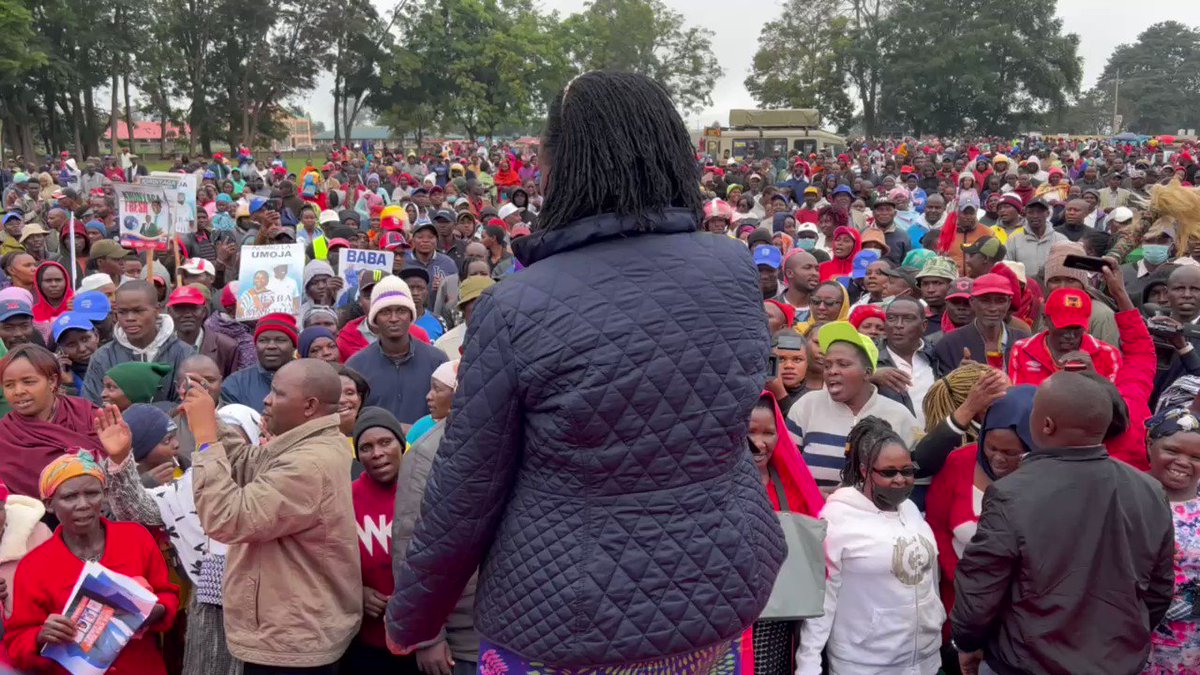 @bonifacemwangi
The only reason we are in this helicopter is because we trust the pilot. There is poor visibility but his track record is the reason why we are all calm. Please vote for leaders with a track record of integrity. Don’t vote for those whose reputation is theft of land and money. 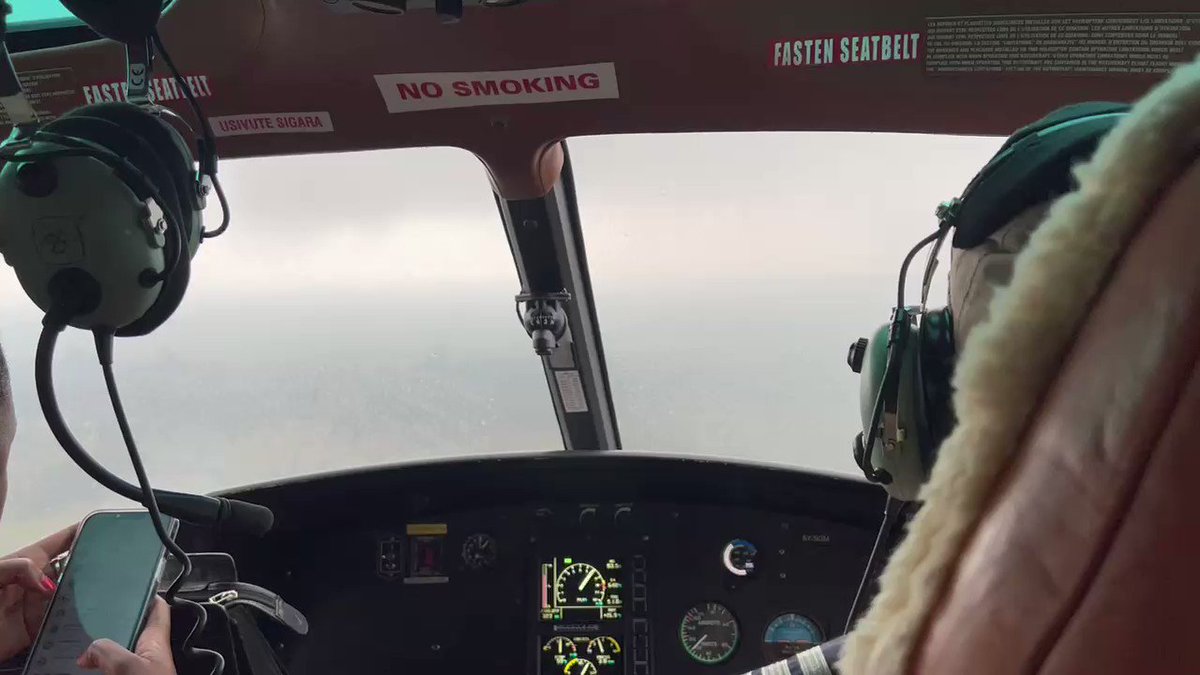 @bonifacemwangi
In 2017 Alex Peru moved to Nairobi to support my campaign for Starehe MP 2017. I have had many personal assistants and he ranks as one of the best. @Perlexy001 is running for MCA Changamwe Ward. You can donate to his campaign on 0798911688. Thank you. 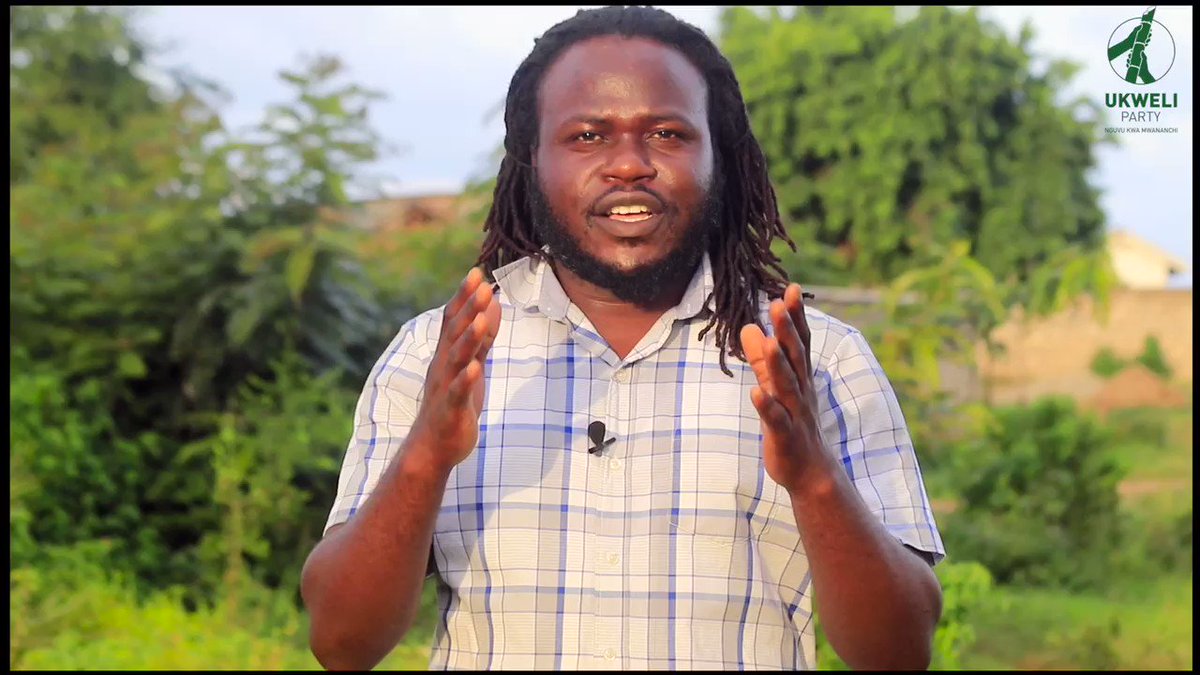 @bonifacemwangi
“The incoming government led by President @RailaOdinga will respect the constitution. We shall protect the opposition because they’re our brothers. The law will be applied equally and we shall not victimize anyone.”- @MarthaKarua #Inawezekana #VoteBlue 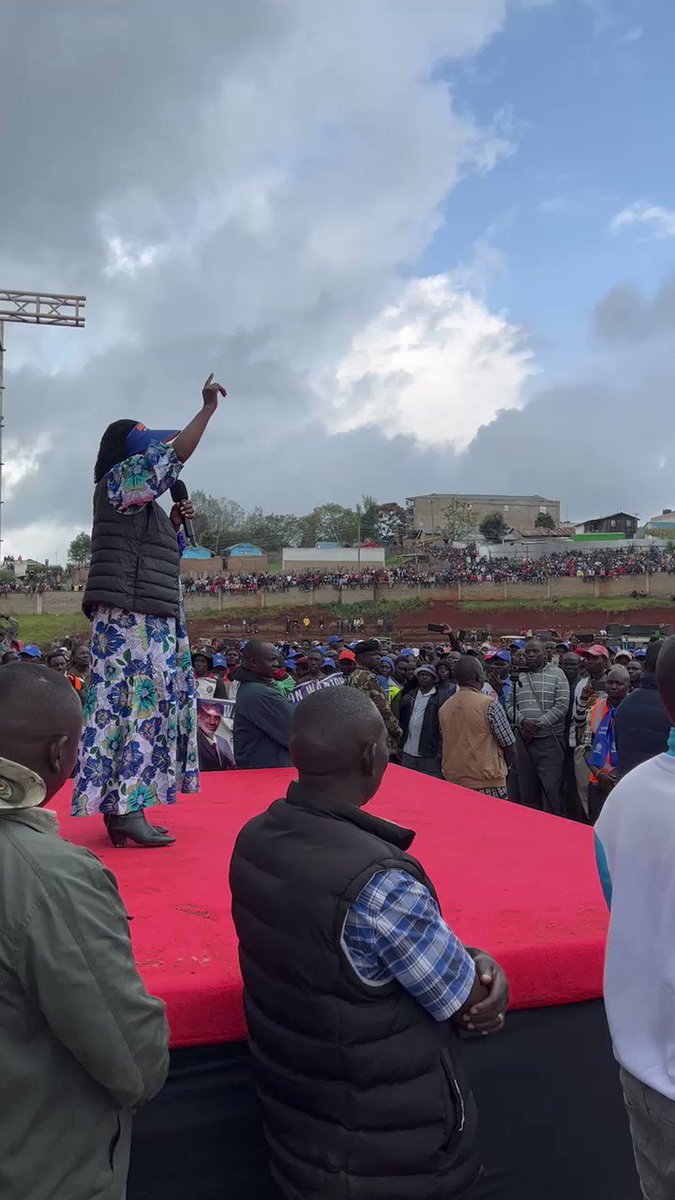 @bonifacemwangi
The warm welcome @RailaOdinga and @MarthaKarua have received in Nandi and Uasin Gishu counties respectively. There is a need for @WilliamsRuto to promise Kenyans that no one will be harmed in his so called strongholds because his village mates will send him home on Election Day! 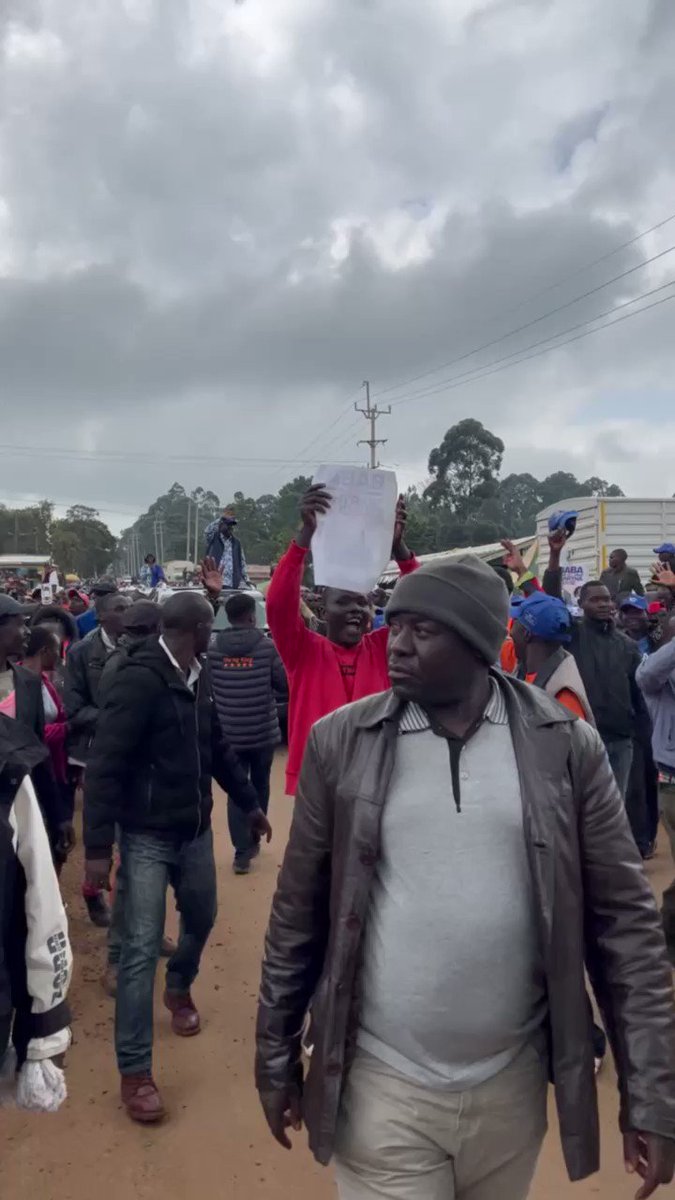 @bonifacemwangi
"Our lives begin to end the day we become silent about things that matter."- Martin Luther King Jnr. This election will determine the fate of our nation for generations to come. May God’s will prevail in our nation and we may keep peace no matter what. #VoteBlue #Inawezekana 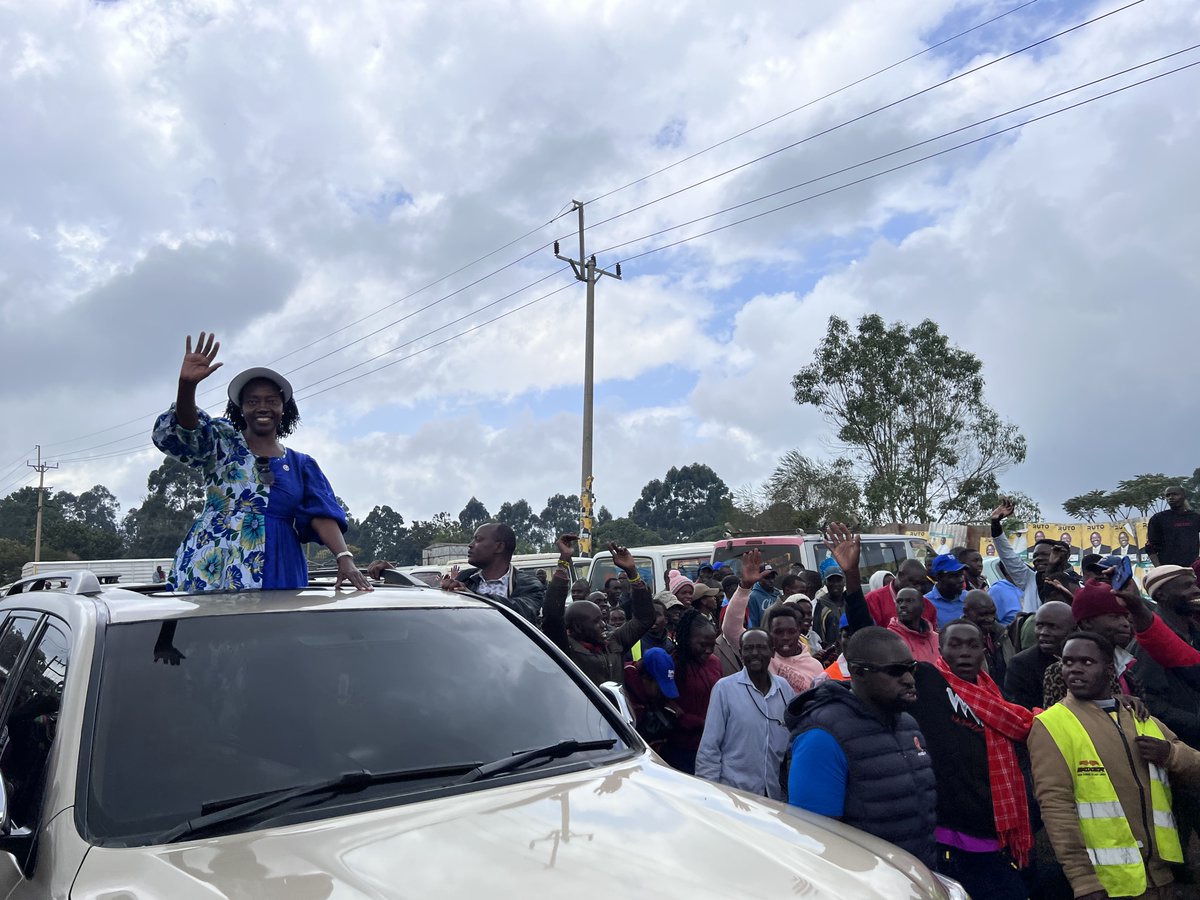 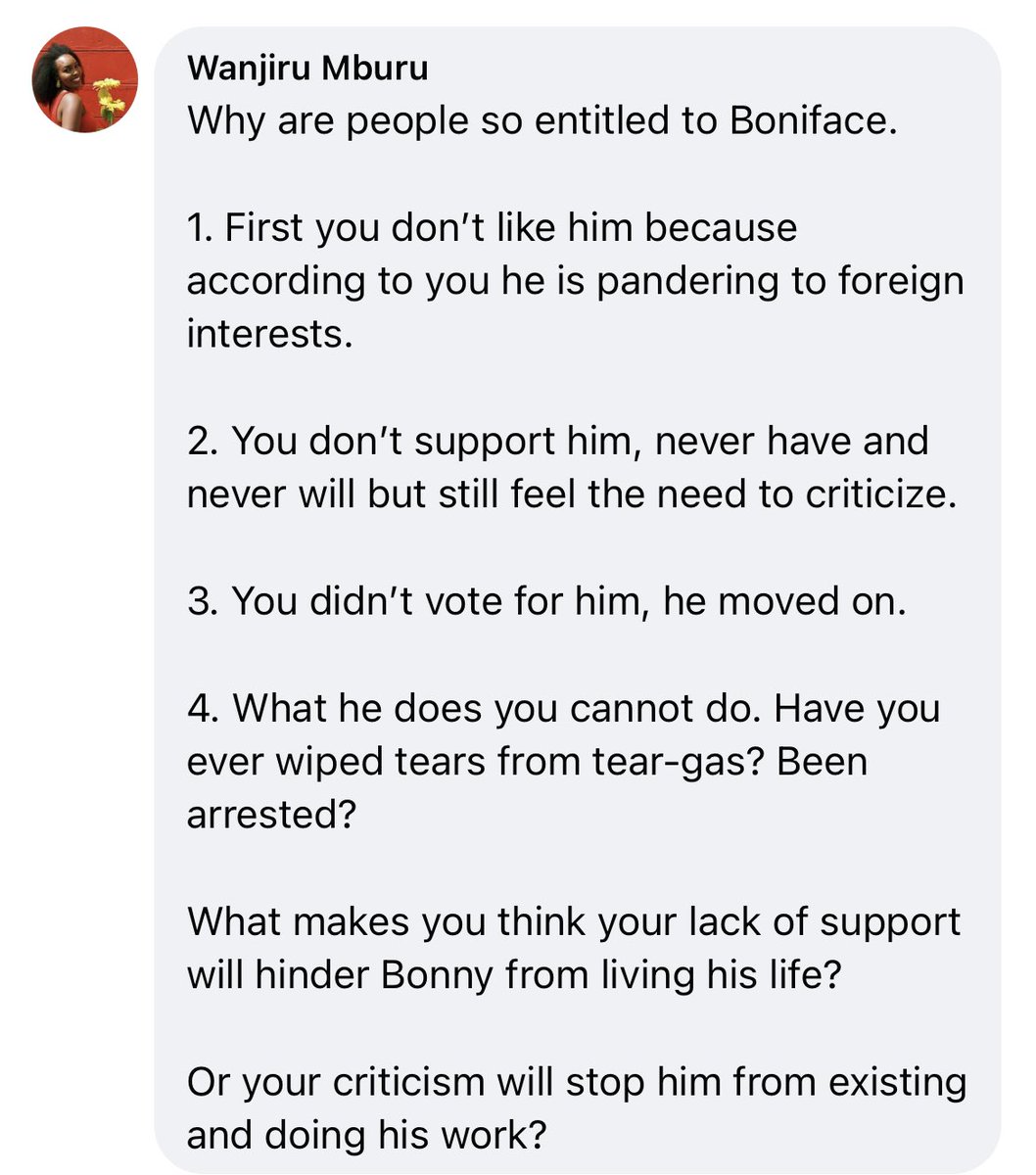 @bonifacemwangi
The eyes have it. 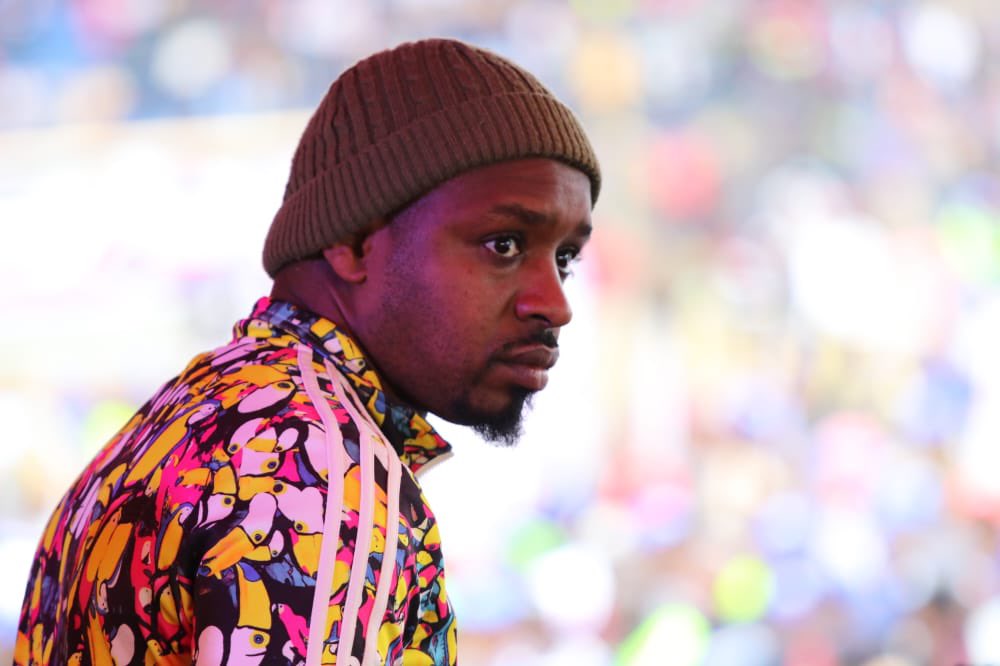 @bonifacemwangi
Kenya’s next President Raila speaking about the Firimbi movement. The whistle movement will be the wake up call for Kenyans on 9th August to go vote for an Azimio government. It will also serve as a warning sound to the corruption cartels that their time is up. #VoteBlue #Rauka 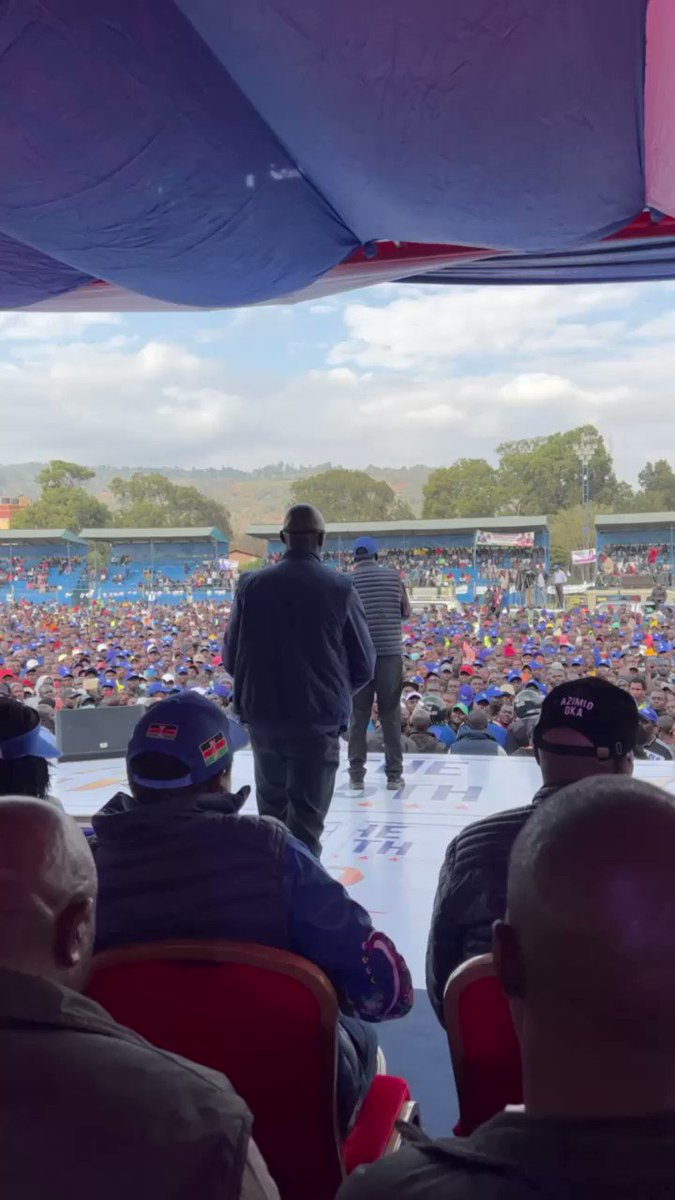 @bonifacemwangi
.@MarthaKarua speaking in Machakos Stadium, she has promised that a @RailaOdinga’s will address the perennial water shortage and hunger in Ukambani. There is money but it’s stolen, like Sh7.7 billion for the Arror and Kimwarer dams that was stolen and no dam was built. #VoteBlue 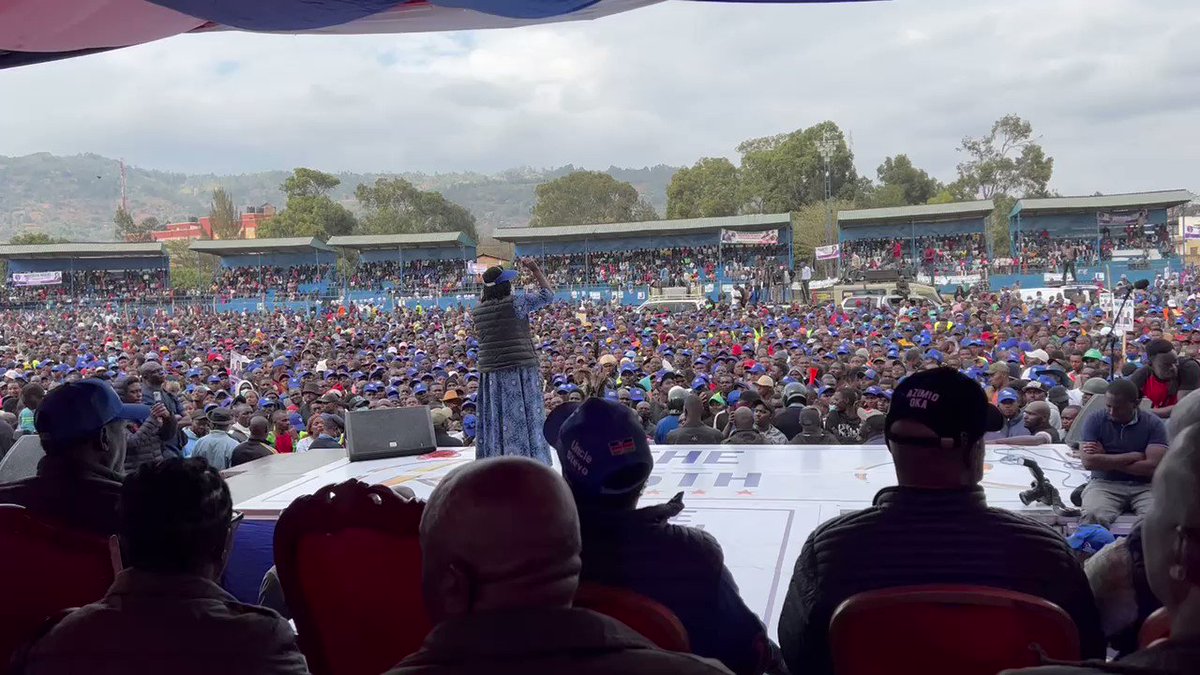 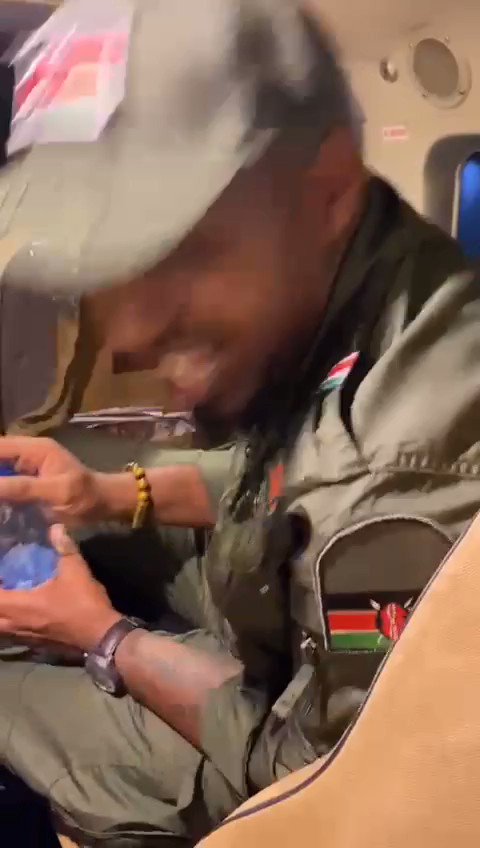 Korir Sing'Oei
@SingoeiAKorir
The beauty about this election is that identity politics is less salient allowing more people to openly express their democratic preferences. @MutumaRuteere @bonifacemwangi https://t.co/p2AVKN5Bcw
04 Aug, 2022 - 11:26 AM UTC

🇰🇪 Pursuing Progress
@milleniallawyer
Criticism against @bonifacemwangi shows the level of madness in this country. You refuse to support his activism based on some flawed logic then now you also want to curtail his right to make a political choice? Maintain the same bystander energy please
04 Aug, 2022 - 08:08 AM UTC

Ifeoluwa Aduke.
@i_amaduke
Stop telling your teenager not to have boyfriends/girlfriends. Yes, you heard me! Instead, this is what you should do, call your teenager & ask him/her if they have a girl/boy in their class that they like. When they tell you, assure them that it is normal. Next, ask him/her to
03 Aug, 2022 - 03:46 PM UTC

The Resistance Bureau
@ResistBureau
Kenyans go to the polls on Aug. 9 to elect their new leaders, from the president down to county assembly members. And we'll come to you *live* at 7PM local time to break down critical issues with our esteemed panel! Learn more, RSVP here: https://t.co/1Fwhs8gdCf #KenyaDecides https://t.co/SUK4Z5IkJJ
03 Aug, 2022 - 12:40 PM UTC

@jamessmat
You are not required to set yourself on fire to keep countrymen warm @bonifacemwangi.
03 Aug, 2022 - 11:15 AM UTC

Kathambi🌱
@iamkathambi
LOL. The way Kenyans treat Boni like they pay taxes to him is both sad and funny. Funny because, he doesn't owe anyone sh8t 😂 Sad because, our country is so dysfunctional, that we desperately depend on people like Boni to fight our battles 😭
03 Aug, 2022 - 08:55 AM UTC

@gabrieloguda
You want Boniface Mwangi to go to the streets for the cops to break his bones, as you Keep Up With The Kardashians, because some people were born to die for you. If you feel Boni has let you down, you also have two hands and three legs, go ask the police to handle you with care.
03 Aug, 2022 - 08:00 AM UTC

Creative Strategist
@wambuijl
💯 'If you feel that Mwangi isn't defending you, go to the streets and defend yourselves.' If only we held to account the leaders in this country, the same way we hold to 'account' Boniface Mwangi, we'd be a better off nation. https://t.co/5Xge0tDgE0
03 Aug, 2022 - 06:39 AM UTC

@MugambiNandi
I endorse this message. Bonnie @bonifacemwangi owes you nothing. He has a right to make his political and personal choices. That right is not limited by your misplaced expectations. You too can hit the streets. It’s a free world! https://t.co/zY1NnM8V8t
03 Aug, 2022 - 06:18 AM UTC

Ohta Ryota
@Ohta_Ryota
When @bonifacemwangi was in the streets fighting you said he was being paid by foreign agents and NGOs to fight his country and govt....when he supports his friend Martha now again you are mad claiming he has sold out because you own him, you pay his bills and feed his family😂😂
03 Aug, 2022 - 05:47 AM UTC

Karani Mutonga
@Karanimutonga
Boniface Mwangi is right to choose a side. Staying neutral at a time like this that we're staring at Gachagua being a heartbeat away from being a president, that's being unpatriotic. If you feel that Mwangi isn't defending you, go to the streets and defend yourselves.
03 Aug, 2022 - 05:32 AM UTC 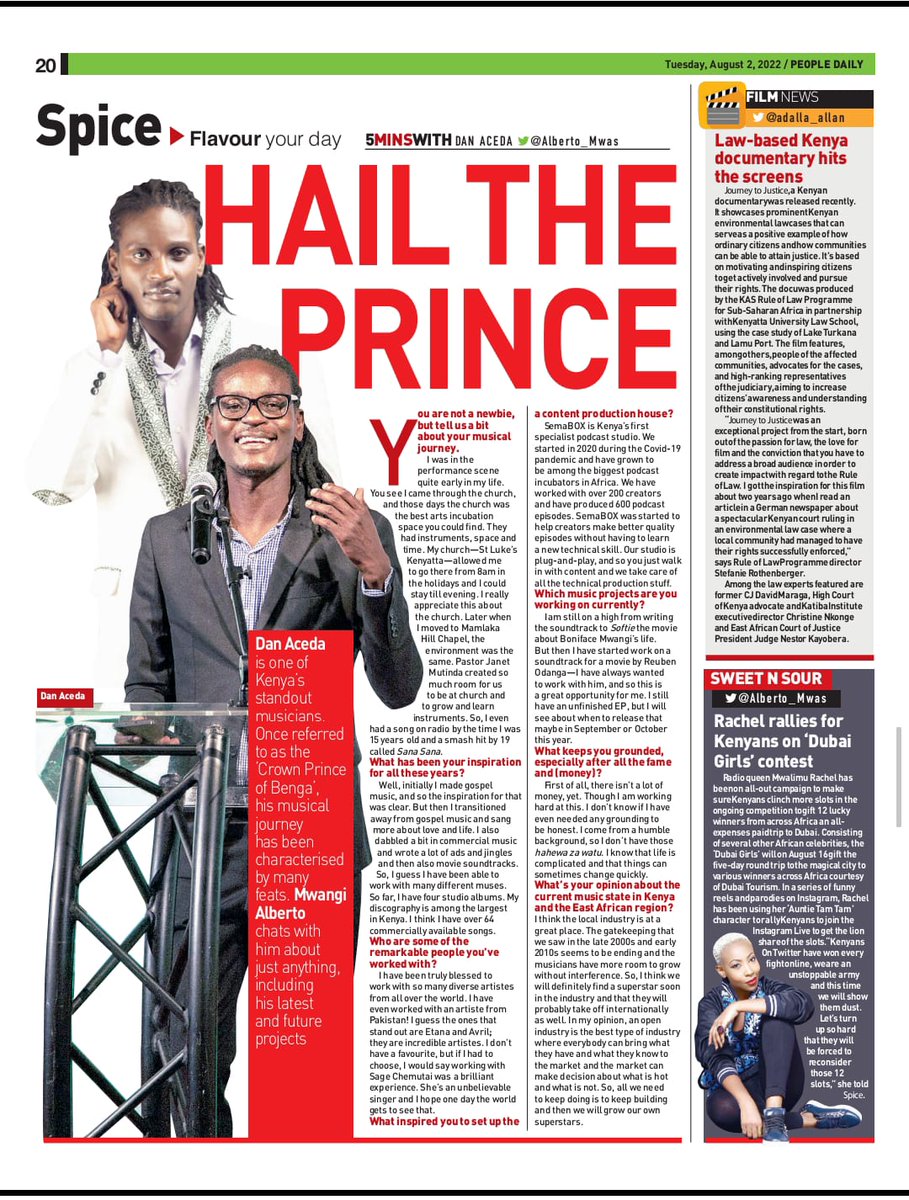 @Galck_ke
@bonifacemwangi is daring and audacious, and recognized as Kenya's most provocative photojournalist. When he wants to run for political office, he is forced to choose: country or family? Watch the full film here: https://t.co/4HRdtUKCgX 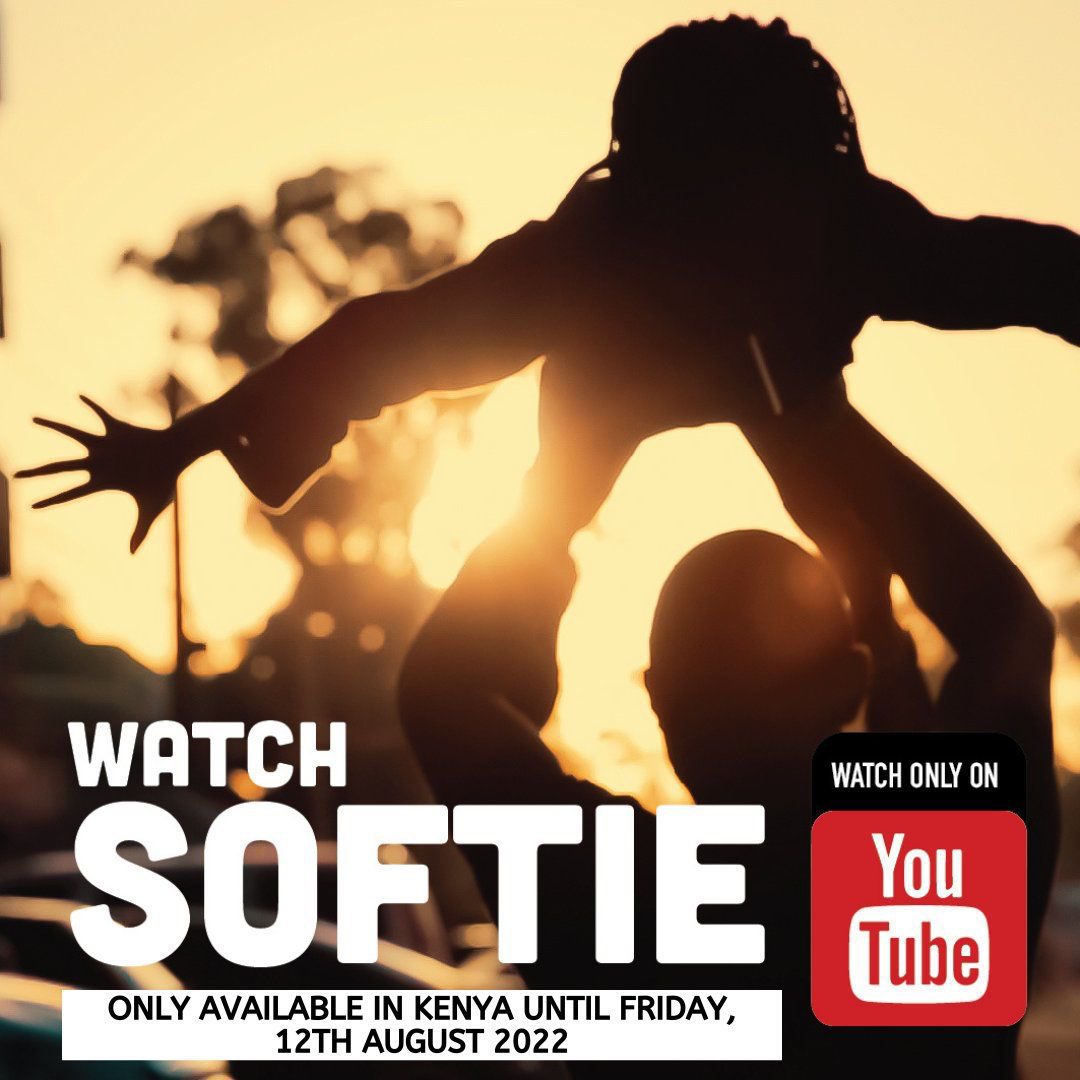 @MugambiNandi
Which of these statements is false? 1. Uhuru is not on the ballot. 2. Ruto is part of the government. 3. Ruto has been in Parliament/Government since circa 1992 4. Rigathi is a sitting member of Parliament 5. Raila and Martha have not been in government for the last 10 years.
02 Aug, 2022 - 06:39 AM UTC

Suleiman Shahbal
@SuleimanShahbal
Thousands brave the cold on a Monday to show support for Baba in Kerugoya, Kirinyaga. The Azimio juggernaut rolls on. Vote for change with Baba na Mama. https://t.co/DURNe9zxbs
01 Aug, 2022 - 09:57 AM UTC

mmnjug™
@mmnjug
The British Army @BATUKOfficial will continue deploying hazardous white phosphorous explosives in Kenya despite growing international condemnation on the use of the chemical. - @NationAfrica
01 Aug, 2022 - 03:25 AM UTC

KenyaOne
@Kenya_One1
@bonifacemwangi @RailaOdinga @MarthaKarua @WilliamsRuto The same warm welcome should be accorded to @WilliamsRuto when he visits @RailaOdinga perceived strongholds,our politics needs to be done with a level of decency and tolerance
31 Jul, 2022 - 12:20 PM UTC

Kobusinge Rose| Climate Justice
@KobusingeRose1
Can you hear them cry for their lives? Those are the sounds&voices I want our governments,the Global North, @UN &other stakeholders to have in their heads while discussing&making decisions on climate action.Treat the emergency with urgency. #MbaleFloods #ClimateChangeDisplacement https://t.co/g5tunIyWZI
31 Jul, 2022 - 10:42 AM UTC

@johnallannamu
Ignorance is bliss. To know is to be constantly perturbed by what's happening in Kenya. We really are held together by chewing gum and our mothers prayers.
29 Jul, 2022 - 07:56 PM UTC

Diana Ngao
@DianaNgao
Homestretch. In 10 days, we shall get up bright and early to vote in #BabaNaMartha overwhelmingly. Let’s bring this home, 15 Million Blue! #VoteBlue #FirimbiMovement https://t.co/zW66hSdqbm
29 Jul, 2022 - 12:34 PM UTC

@makaumutua
Court says Sh200 million banked by ⁦@rigathi⁩ are “proceeds of crime.” Orders the money forfeited to the state. And he’s running for Deputy President of the Republic of Kenya. https://t.co/t5sfNCDniO
28 Jul, 2022 - 03:04 PM UTC

Kūūmīrīo kūūmīrīo
@kavsmaina
Me I love @NuriaStore there is hardly a book I desire they either don't have or cannot get me. My book plug Numero Uno with the best customer service. Thanks guys, digging in soon. ❤️ https://t.co/Lah9AleC40
28 Jul, 2022 - 01:28 PM UTC

Karwaay
@Karwaay
Anybody going to Europe/India/The US any time soon? I desperately need some migraine meds. It's over-the-counter and not bulky. Pleeease?
28 Jul, 2022 - 08:36 AM UTC
@bonifacemwangi's