Reporter for CNN, fact-checking the president and others. @ddale8
I’m gone for a while goodbye everybody 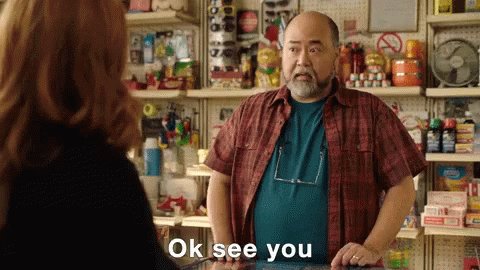 @ddale8
The campaign bio of Trump-backed Michigan Secretary of State candidate Kristina Karamo says she “serves as a professor” and “teaches” at a community college, but a college spokesperson told me she hasn’t worked there since 2018. I asked Karamo for more info. No response yet. 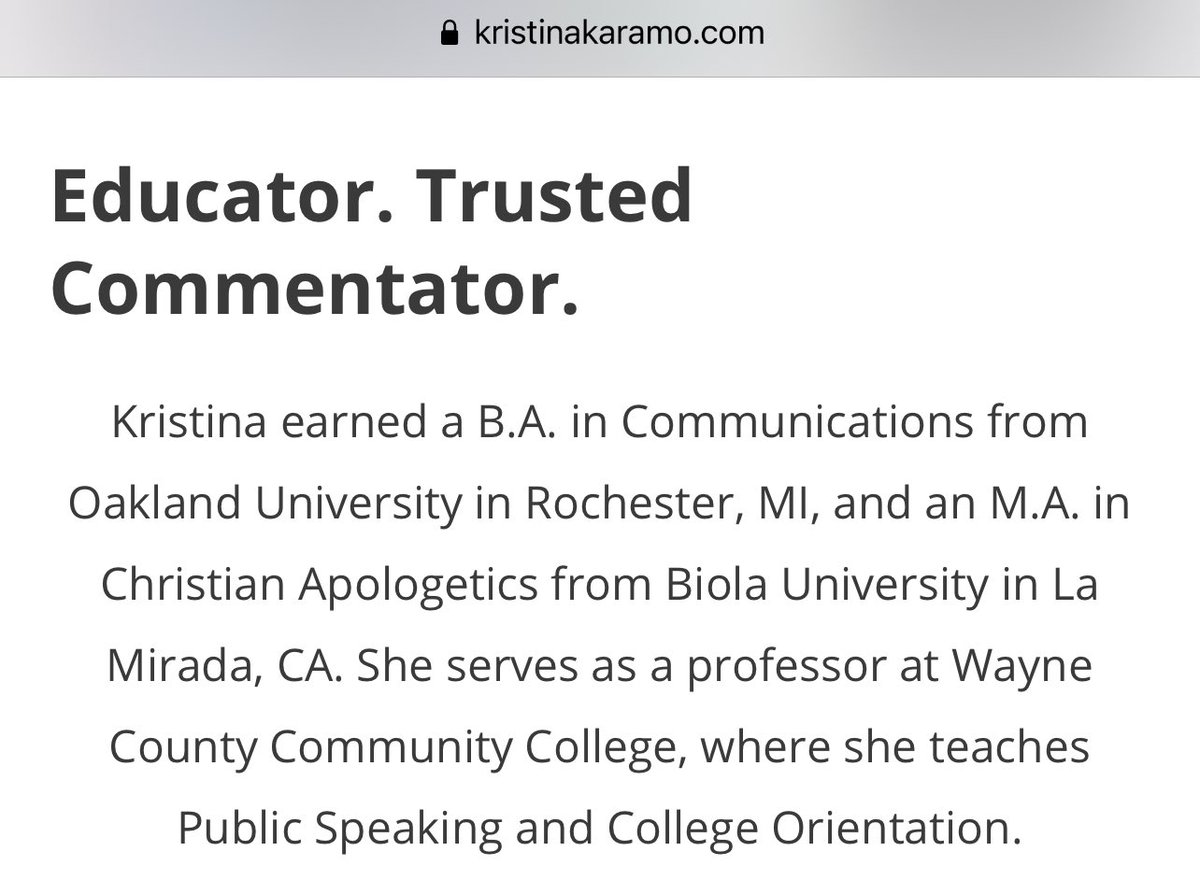 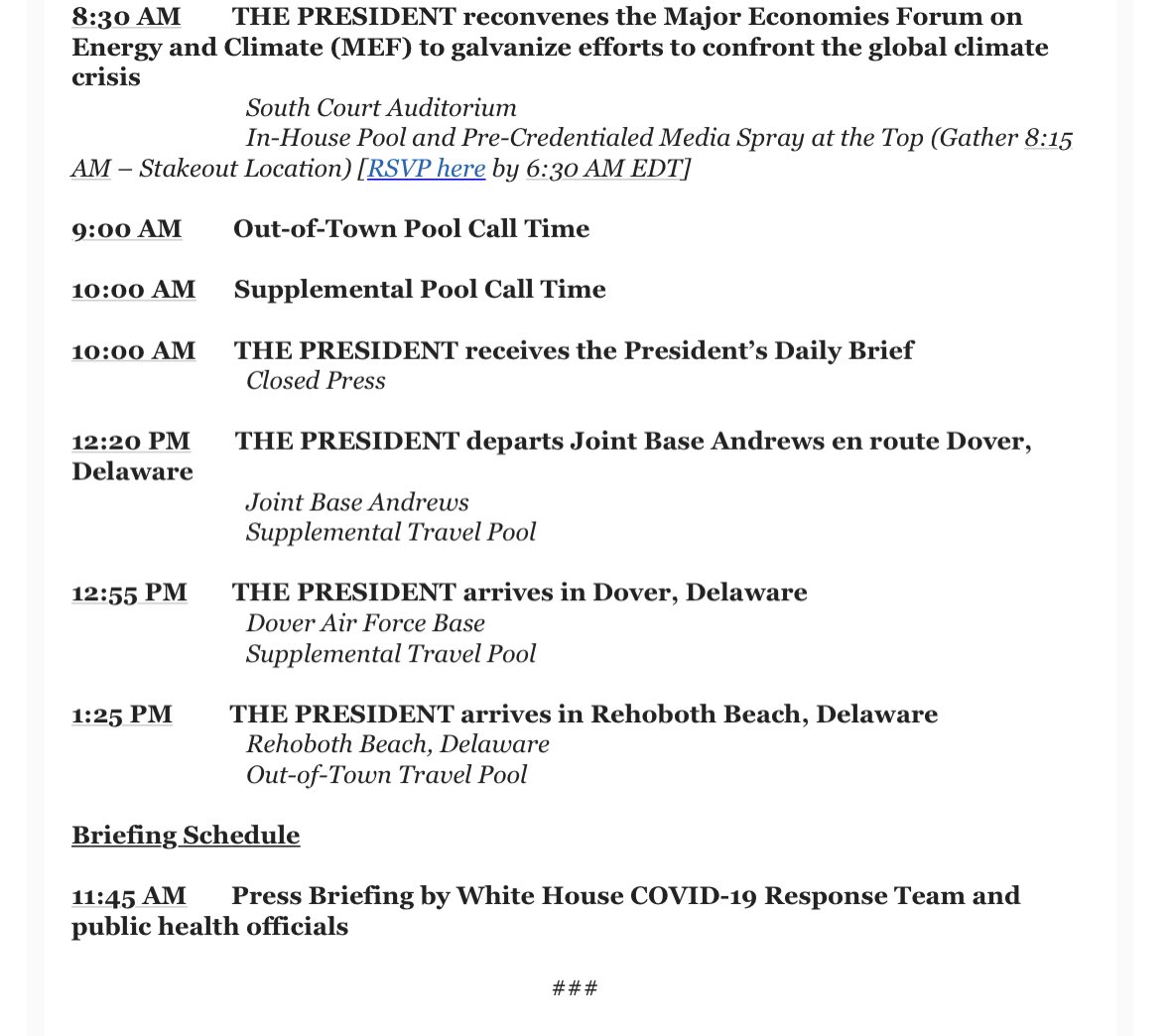 @ddale8
In 2020, state elections chiefs from both parties resisted Trump’s fraud lies. For 2024, Trump is trying to replace them with people who promoted those lies - one of whom, state Rep. Mark Finchem in Arizona, has also promoted QAnon lies: https://t.co/MtIz1ZlJk8
16 Sep, 2021 - 05:50 PM UTC

@ddale8
Here’s Biden’s public schedule for today. (Public schedules don’t include all of a president’s activities.) 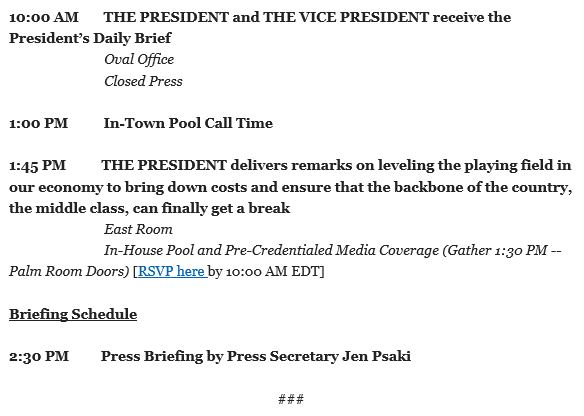 @ddale8
The spokesperson for the former president is out here lying a lot about American elections. It is not good. 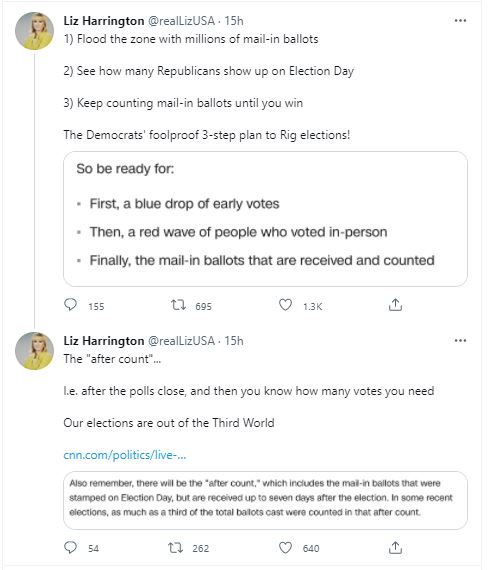 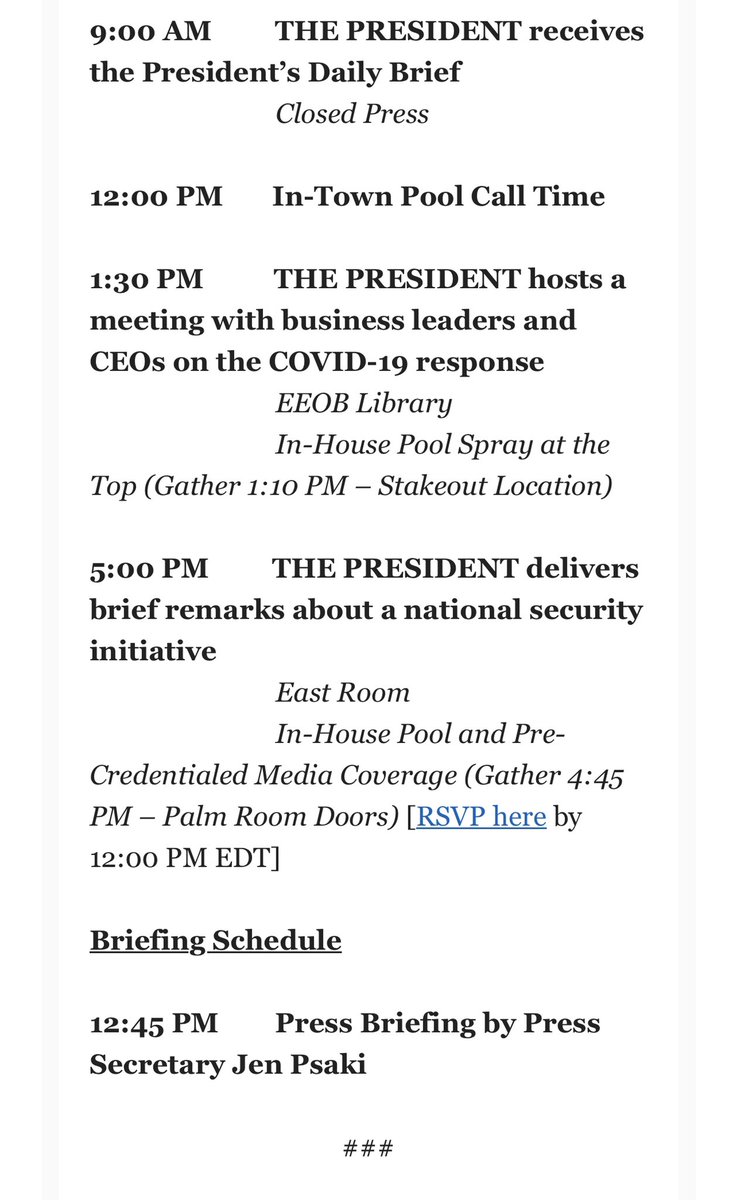 @ddale8
At length, Sen. Jim Risch absurdly said someone at the White House yesterday hit a "button" to stop Biden from talking. No. There was a planned "pool spray," in which press/cam is allowed in for brief remarks at a meeting's start; it ended as Biden began questioning officials.
14 Sep, 2021 - 03:25 PM UTC 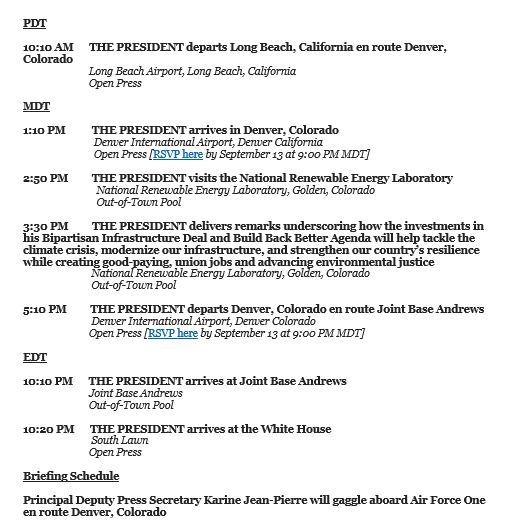 @ddale8
Before there are any results from the recall, Elder’s campaign is promoting a petition “demanding a special session of the California legislature to investigate and ameliorate the twisted results of this 2021 Recall Election of Governor Gavin Newsom." https://t.co/LYBMZF0zBO
14 Sep, 2021 - 02:01 AM UTC

@ddale8
Trump has now endorsed Finchem for the job of Arizona’s top elections official. The former president is going key state by key state trying to help get promoters of his lies about the 2020 election elected to be in charge of the 2024 election. https://t.co/2jVFDZFvHj
13 Sep, 2021 - 07:10 PM UTC

@KatieBoLillis
BREAKING: Gen. McKenzie, the top US commander in the Middle East, tells reporters that a US drone strike in Kabul on 29 Aug, killed no ISIS fighters but 10 civilians, including seven children. "It was a mistake," McKenzie says.
17 Sep, 2021 - 07:04 PM UTC

@APFactCheck
Nobody’s VA health benefits are being taken away based on their COVID-19 vaccination status, as was suggested by a satirical article that many shared as real. It came from a site that calls its stories “parodies, satire, fiction, fake.” @AP has the facts. https://t.co/4pMyJtY6gK
16 Sep, 2021 - 03:00 PM UTC 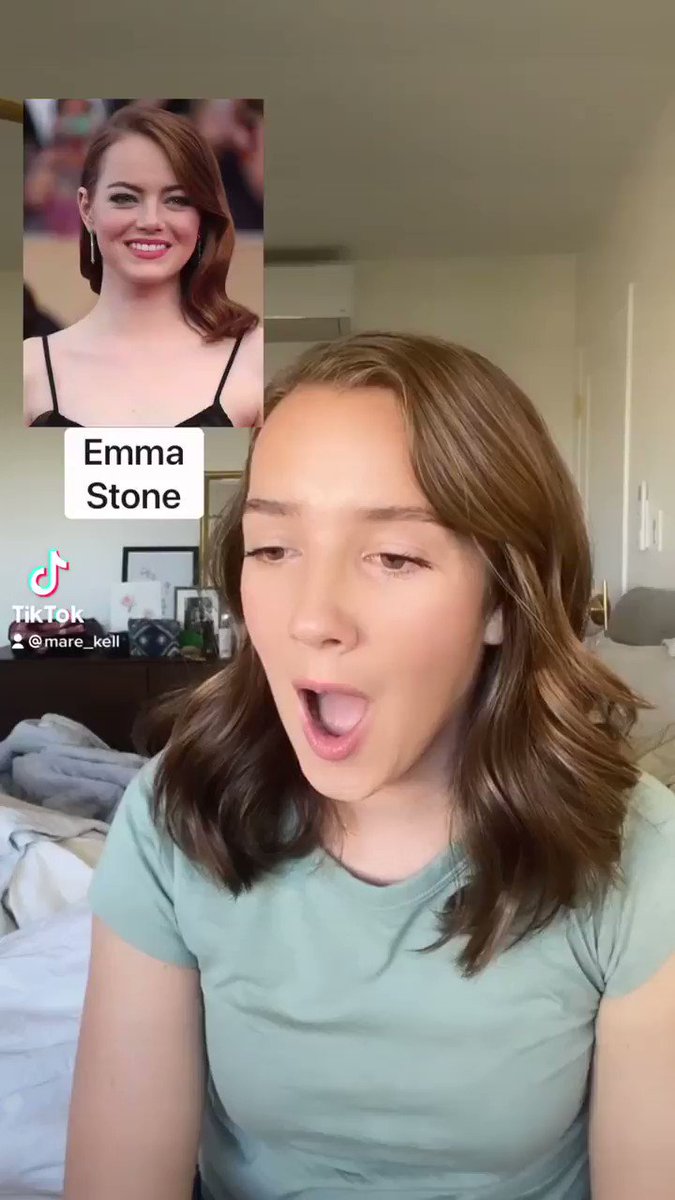 @nytimes
A news release published on Monday claiming that Walmart would begin accepting payments in Litecoin, a cryptocurrency, was fake, the retail giant said. The hoax announcement drove up the price of the currency by 30%. https://t.co/1YjkilJkZa
13 Sep, 2021 - 05:15 PM UTC

@evanhill
The final act of the U.S. war in Afghanistan was a drone strike in Kabul that killed 10 people. Our latest investigation shows how a man the military saw as an "imminent threat" and "ISIS facilitator" was actually an aid worker returning to his family: https://t.co/eUX5WSImrD
10 Sep, 2021 - 08:11 PM UTC

@Garrett_Archer
I don't even know what to say anymore... 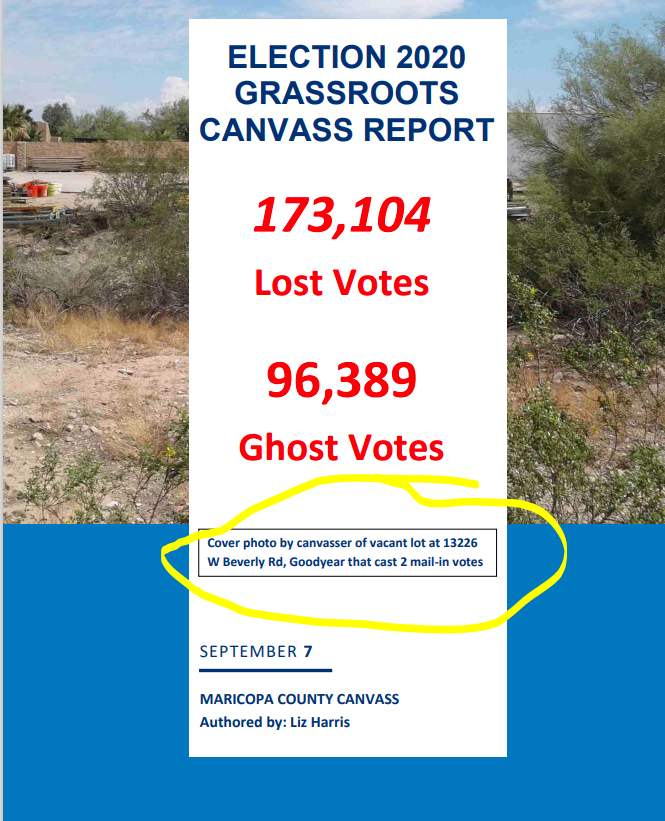 @joesonka
Truly embarrassing stuff from an elected official in Kentucky's state Senate and a likely candidate for Kentucky's chief election official in 2023. This is on the level of Lin Wood and Sydney Powell: https://t.co/BngAJvPDv7
03 Sep, 2021 - 12:56 PM UTC

@bencasselman
Leisure and hospitality employment was FLAT, after several months of very strong gains. Sure looks like a Delta effect.
03 Sep, 2021 - 12:31 PM UTC

@AliSwenson
Lions, crocodiles, penguins and gorillas are not roaming the streets of South Orange, New Jersey, despite a hoax that was circulating widely the morning after severe flash flooding in the area. https://t.co/pU1hsS7Iww
02 Sep, 2021 - 03:39 PM UTC

@DanLamothe
President Biden says just now that 100,000 Afghans have been airlifted out of Afghanistan. How many SIV applicants, though? The administration has not answered that question directly. Many, many reports of SIVs in hiding and still not able to get out despite asking repeatedly.
31 Aug, 2021 - 07:40 PM UTC

@CNNPaul
Republican Rep. Madison Cawthorn suggested there could be "bloodshed" over future elections as he pushed false claims about election security and voter fraud https://t.co/FeDqRJCTxy Story with @ddale8:
31 Aug, 2021 - 12:04 AM UTC
@ddale8's