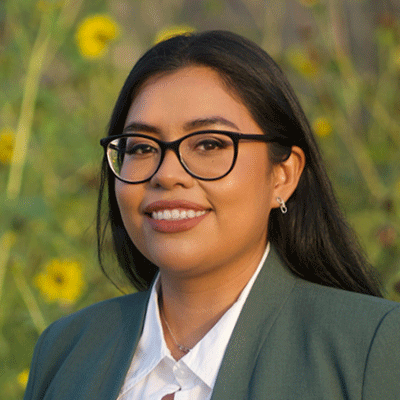 @JCisnerosTX
Your mid-week reminder to pay attention to @MichelleVforTX and @RochelleMGarza’s races in TX!
11 Aug, 2022 - 12:40 AM UTC

@JCisnerosTX
My team and I launched our campaign a year ago on this exact day—a campaign fueled by love for our community and hope that we can build a better future. We still have a lot of work left to do, but when I look at these pictures, I feel so much love and hope for our future ❤️ 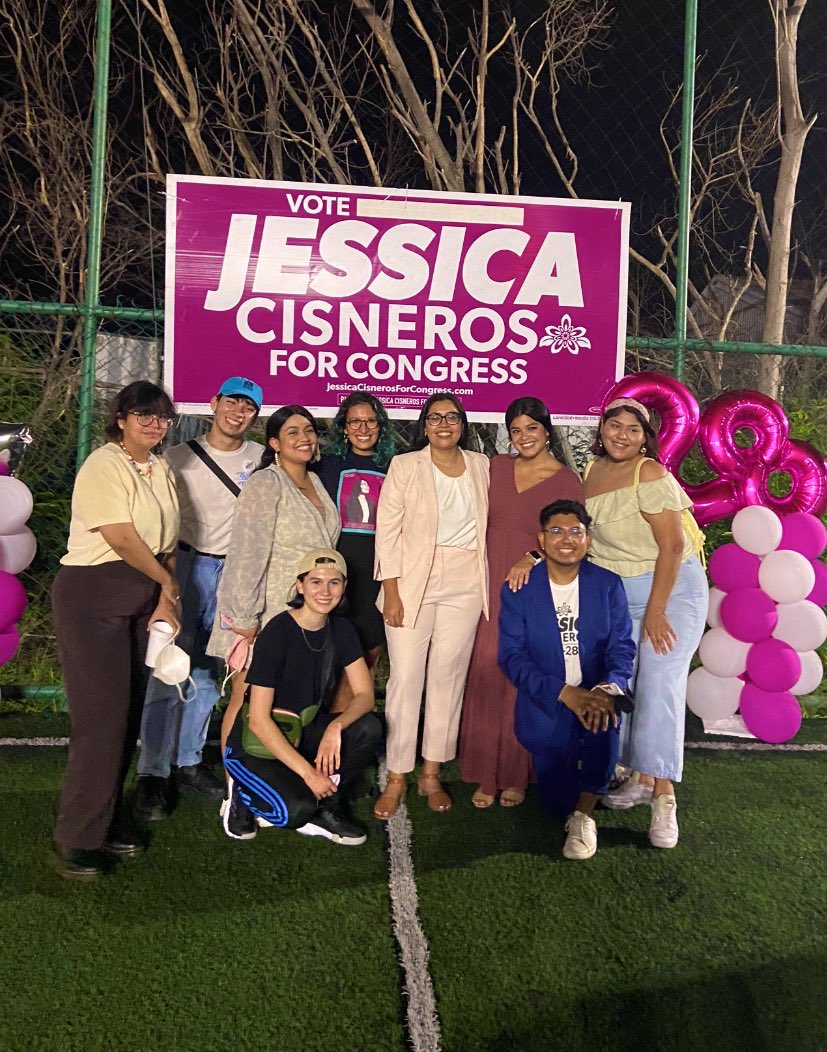 @JCisnerosTX
The murder of children and teachers in Uvalde happened right in our backyard. Just two hours away. Again, Democratic leadership went all out for this man and they still can’t whip @RepCuellar’s vote. https://t.co/S0PffUCMGI
29 Jul, 2022 - 11:11 PM UTC

@JCisnerosTX
Texas still has a $7.25 minimum wage and Cuellar thinks working people in our district don’t even deserve that. The average income per person in town is $19,307. How are Dems supposed to energize South Texans for the midterms with this?? https://t.co/ugxHEMZ7Sh
27 Jul, 2022 - 03:46 PM UTC

@JCisnerosTX
Last time, Henry Cuellar was the only Dem to vote against protecting our reproductive freedom. Call the last anti-choice Dem in the House & demand he stand with us: 202-225-1640. This is not a drill. Democrats need to pull out all the stops. #WHPA https://t.co/7tRvOoDLMP
15 Jul, 2022 - 04:27 PM UTC

@JCisnerosTX
I’ve always said that the path toward turning Texas blue runs through South Texas. Can y’all give @MichelleVforTX a follow and learn how you can help drive turnout for victories up and down the ballot this Nov? Please and thanks! https://t.co/FgzTFtwQyS
27 Jun, 2022 - 08:21 PM UTC

@JCisnerosTX
To my repro friends & those who are out there in the human rights advocacy trenches everyday: Rest is also a form of resistance. It’s a long fight ahead. It’s ok if what you do today is take a step back and take care of yourself. This doesn’t fall on one person. It’s on us all.
24 Jun, 2022 - 09:55 PM UTC

@JCisnerosTX
This isn’t a drill. Become a co-sponsor and vote for the Women’s Health Protection Act, @RepCuellar. Stop being the last anti-choice Democrat. Step up and meet the moment. Your constituents—myself included—will keep pushing you to do the right thing. We aren’t going away. https://t.co/62R6wywyn1
24 Jun, 2022 - 04:30 PM UTC

@JCisnerosTX
We did not get here by accident. The passage of SB8 and the overturning of Roe was the result of a concerted effort by anti choice politicians. Abortion is healthcare and we have to come together, organize and fight to protect our rights and hold our leaders accountable.
24 Jun, 2022 - 04:11 PM UTC

@JCisnerosTX
The results of the #TX28 runoff are not what we had fought for. I am so grateful for the leap of faith so many of you took on this underdog race. I look forward to keep fighting for a more progressive and accountable Democratic Party and work to turn Texas blue in November.
21 Jun, 2022 - 09:53 PM UTC

@JCisnerosTX
Juneteenth is an important day in Texas. Here’s to honoring the incredible legacy of Black Americans and recommitting ourselves to continue the fight for justice and liberation ❤️✊🏾 https://t.co/5sAAsk1hh0
19 Jun, 2022 - 10:50 PM UTC 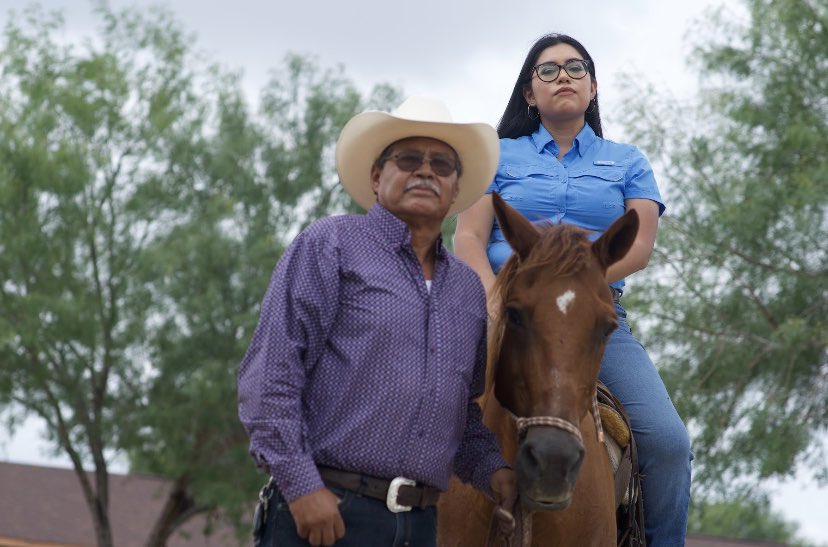 @JCisnerosTX
Today’s the 10th anniversary of DACA. We need a pathway to citizenship. In the meantime, deferred action provides some protection to folks who are American but for their status. A DACA renewal fee is $495 which is a lot for many. Let’s help some folks fundraise their fee!
16 Jun, 2022 - 12:31 AM UTC

@JCisnerosTX
Congrats to the workers at the first Starbucks to unionize in San Antonio! Here’s to the first of hopefully many to come. Strong coffee and an even stronger union! Thank you for your inspiring leadership 💪🏾☕️ https://t.co/FItmlihQ9l
14 Jun, 2022 - 10:12 PM UTC

@JCisnerosTX
There is less than 2 hours left to fix your mail-in ballot at 5 pm TODAY. With only a 177 vote difference, every vote matters but we need you to make sure your vote counts. Track your mail-in ballot here: https://t.co/nT5P6o8pJn… Call our voter protection #: 956-413-7752. 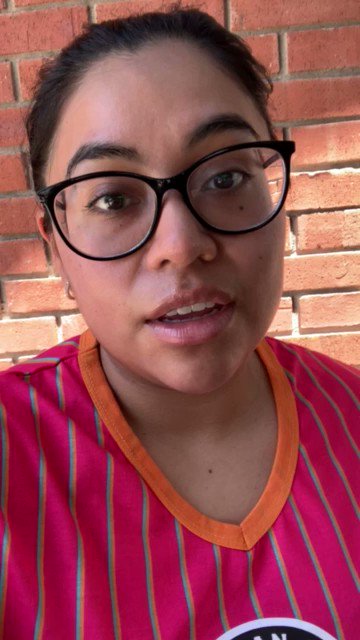 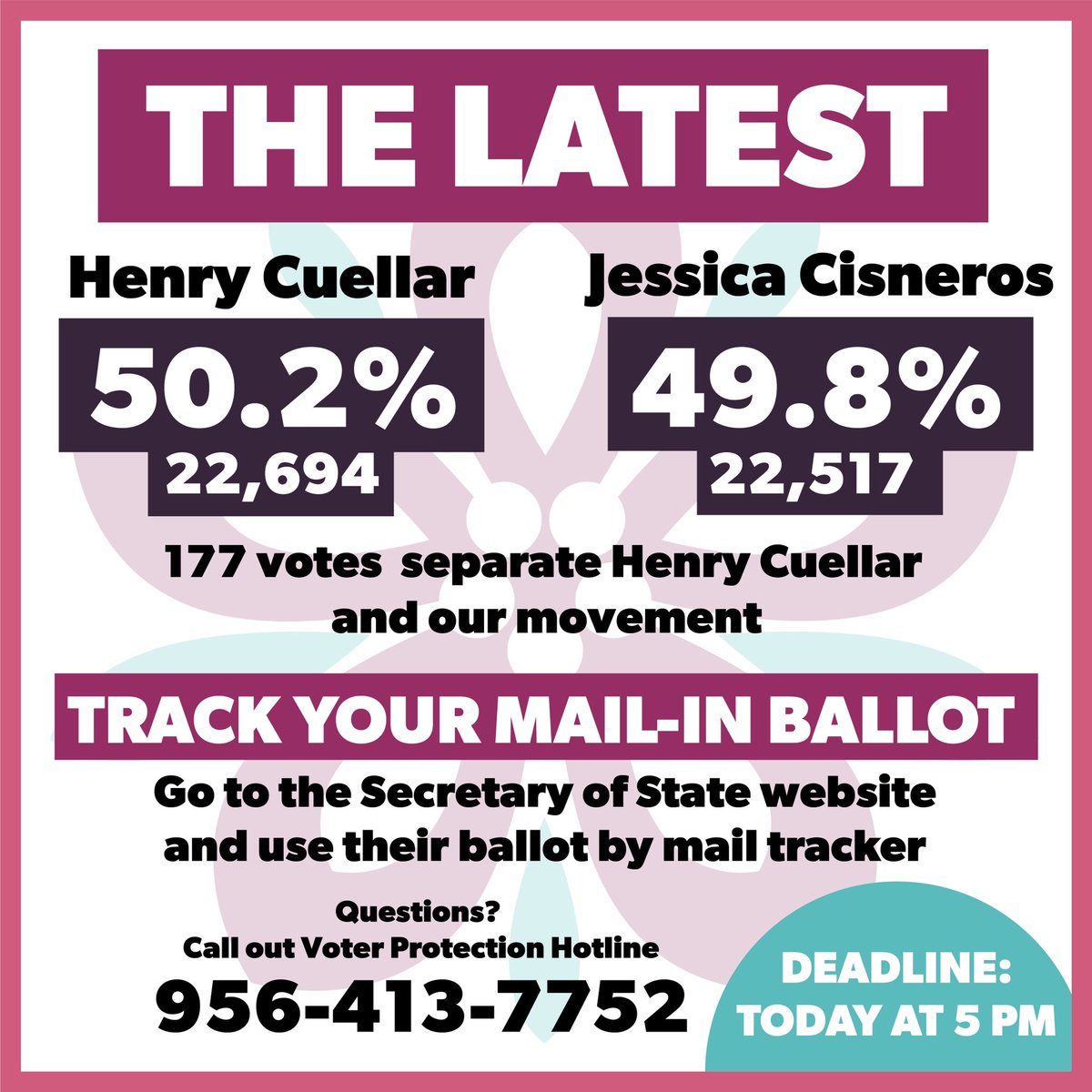 cary clack
@caryclack
If May 24 is drifting from your attention, let this picture from Amerie’s mother refocus you. Look at Irma Garcia teaching, look at the children, their names on the whiteboard. Their faces, profiles, and names are so familiar to you. Remember what you can’t forget. Room 112. https://t.co/Lgz97VAdqo
06 Aug, 2022 - 11:50 PM UTC

Jolt Union
@JoltUnion
The Jolt Union is proud to announce we received voluntary recognition from our board last month. Follow on Twitter and Instagram @JoltUnion for updates on our collective bargaining process and solidarity with our #UnionStrong friends and colleagues in Texas and across the country https://t.co/t0gI6P9EsC
01 Aug, 2022 - 11:38 PM UTC 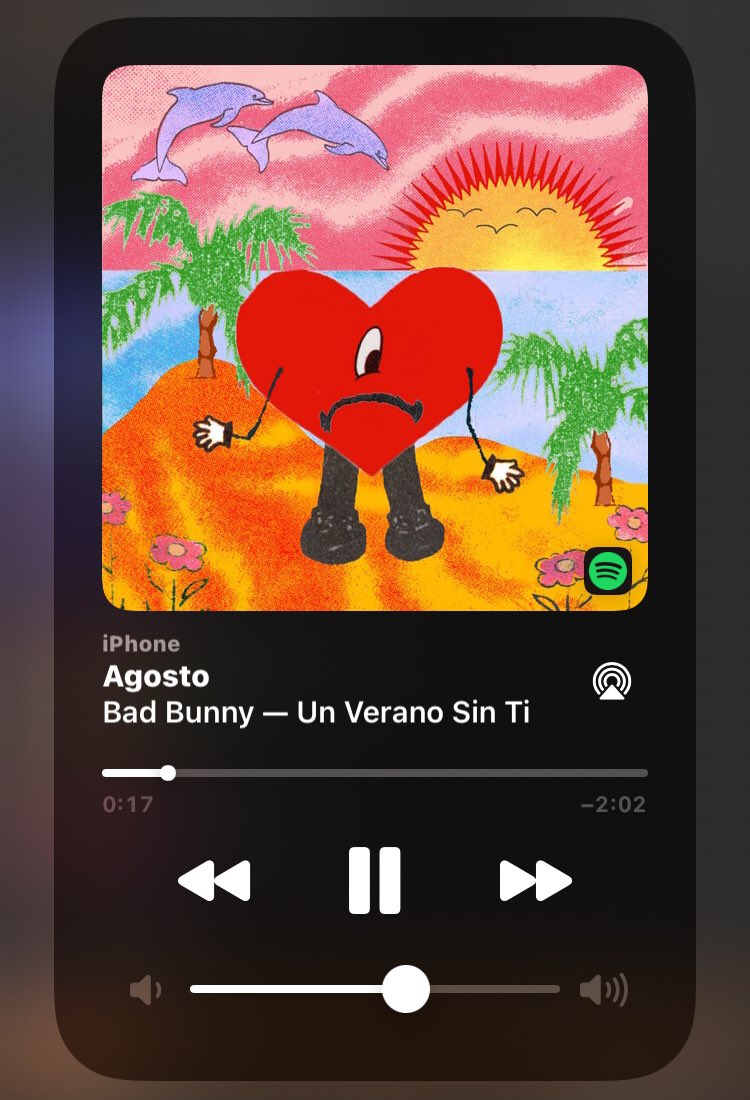 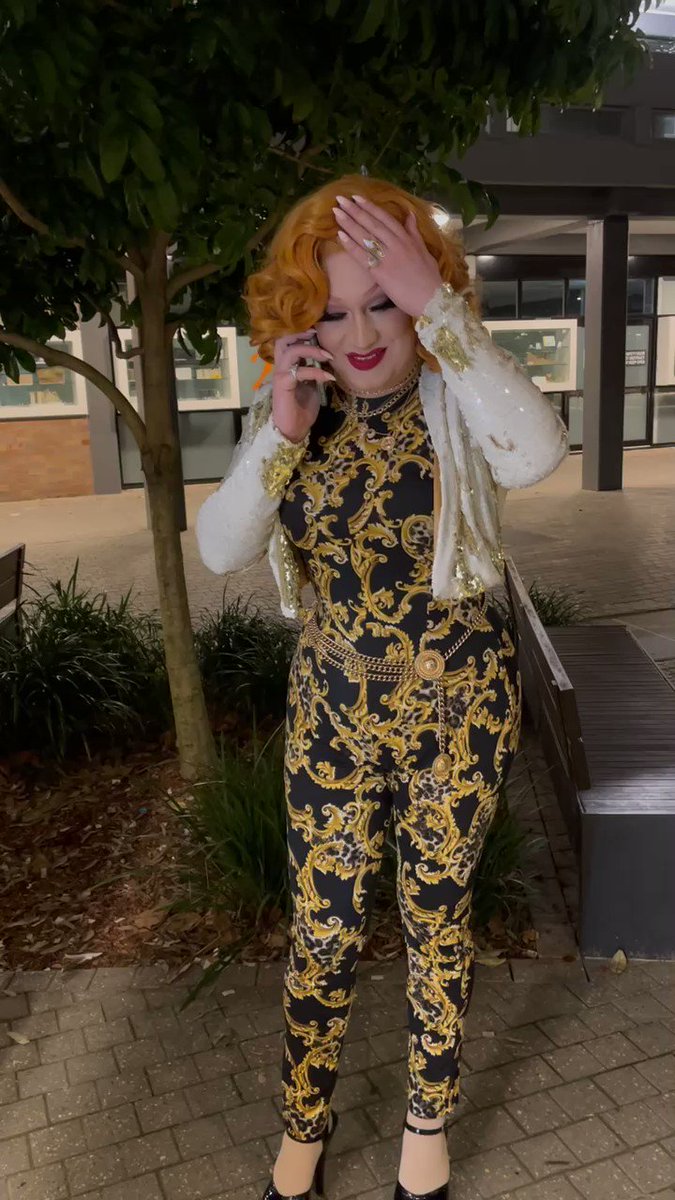 SATX SBWorkersUnited
@SATXSBWU
If you're interested in organizing your store, fill out the form at https://t.co/B3ZiLH5UyV and an organizer will email or text ya! https://t.co/XNVvrvxDGe
27 Jul, 2022 - 08:59 PM UTC

Nancy Cárdenas Peña
@ncardenastx
Whole Woman's Health in McAllen, Texas was the last clinic performing abortion care for the Río Grande Valley. A predominantly Latinx border community w/ a big immigrant presence. It has ceased to operate. This is truly a heartbreaking day.
07 Jul, 2022 - 01:19 AM UTC

@jherrerx
People in Latin America know that their countrypeople are drowning in the Rio Grande or cooking to death in the back of trucks. And yet people still come. So what deterrence do you imagine will work? What gauntlet do you imagine that’s more terrifying than what we’ve seen today?
28 Jun, 2022 - 04:40 AM UTC

@jherrerx
Horrifying news. 46 migrants were found dead in a semi-truck outside of San Antonio. We often focus on these mass death events. But people are dying on the border and in migration *constantly.* At least 10 people drowned in the El Paso sector alone in just the last 3 weeks
28 Jun, 2022 - 04:13 AM UTC

Frontera Fund
@LaFronteraFund
Today, the U.S. Supreme Court issued a shattering blow to the right to access abortion in the U.S., leaving even more people struggling to access the essential health care they need. As much as we expected this to happen, we are still devastated. (1/4)
24 Jun, 2022 - 05:35 PM UTC

bestie emma
@strawberrysueno
nothing much to say about this other than donate to @LaFronteraFund https://t.co/XEkg8Wb9tK
24 Jun, 2022 - 02:36 PM UTC

@sunrisemvmt
It should not be lost that young people matched millions of dollars with over 1 million contacts to voters in #TX28. The Democratic party is leaving our power on the table, but we won’t. We will use it to keep building and win. 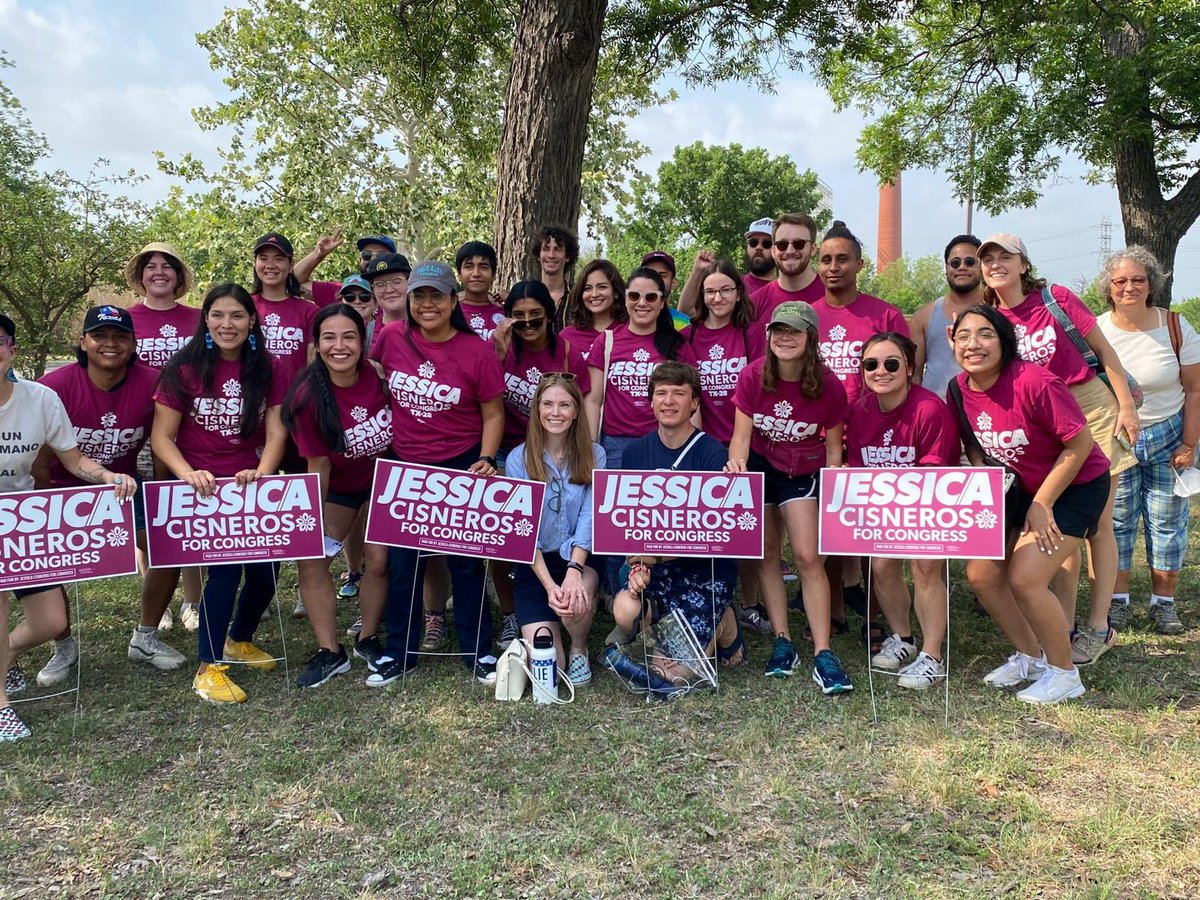 @KinaCollinsIL
It’s time for fresh air in the Windy City. In 7 days, we can elect change we deserve—rooted in the love, community & solidarity at the heart of #IL07. We can heal the root causes of gun violence, defend abortion rights, expand unions, fund schools & build a Chicago for us all. 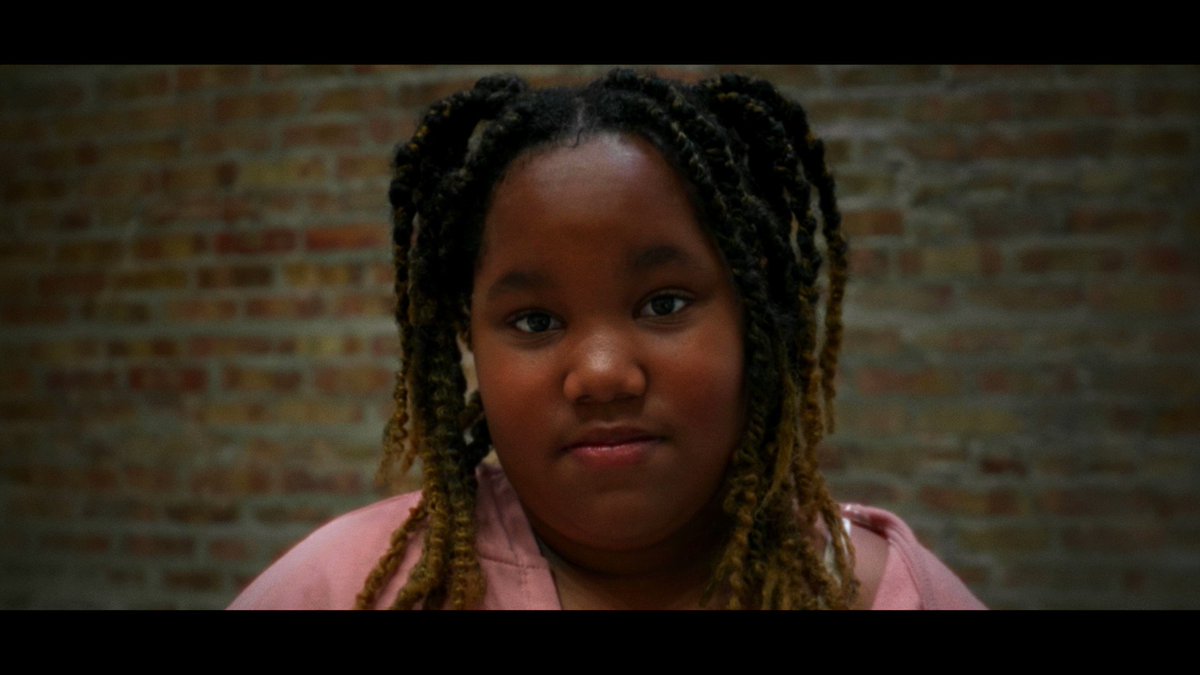 Arena
@arenasummit
While they try to govern with hate, we are organizing here with love. - @JCisnerosTX during the closing keynote at #ArenaSummit https://t.co/r4H2otrFTU
12 Jun, 2022 - 08:42 PM UTC

@SawyerHackett
Shoutout to the Dem leaders who endorsed Henry Cuellar, who's currently winning by 281 votes. He was one of three Dems who voted against banning high-capacity magazines yesterday. His district is 80 miles from Uvalde.
09 Jun, 2022 - 03:06 PM UTC 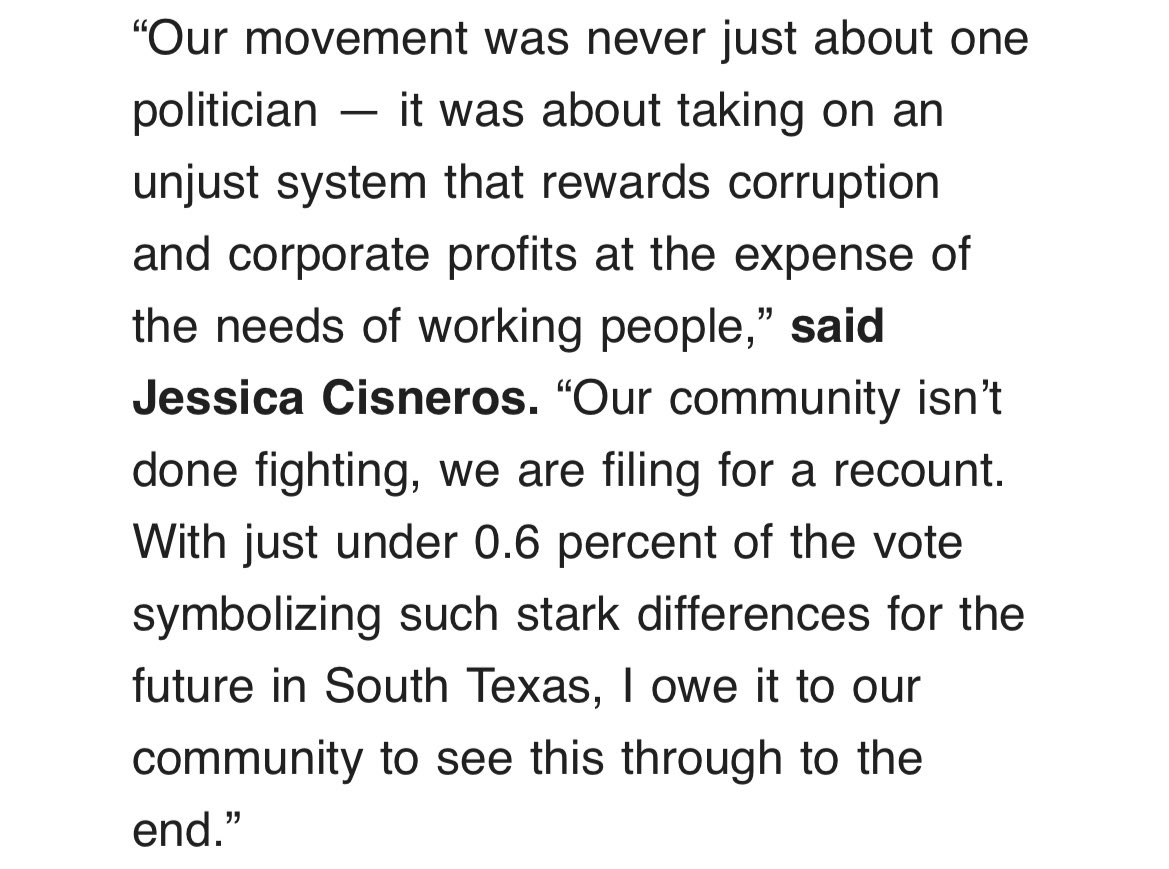 Lidia Terrazas
@LidiaTerrazas
PLEASE HELP: This is Elihana Cruz Torres, one of the victims of the Uvalde massacre. Her dad is incarcerated for a drug-related offense. He received the last letter from her on Friday May 20. Thursday afternoon he found out of her passing and his compassionate release was denied. 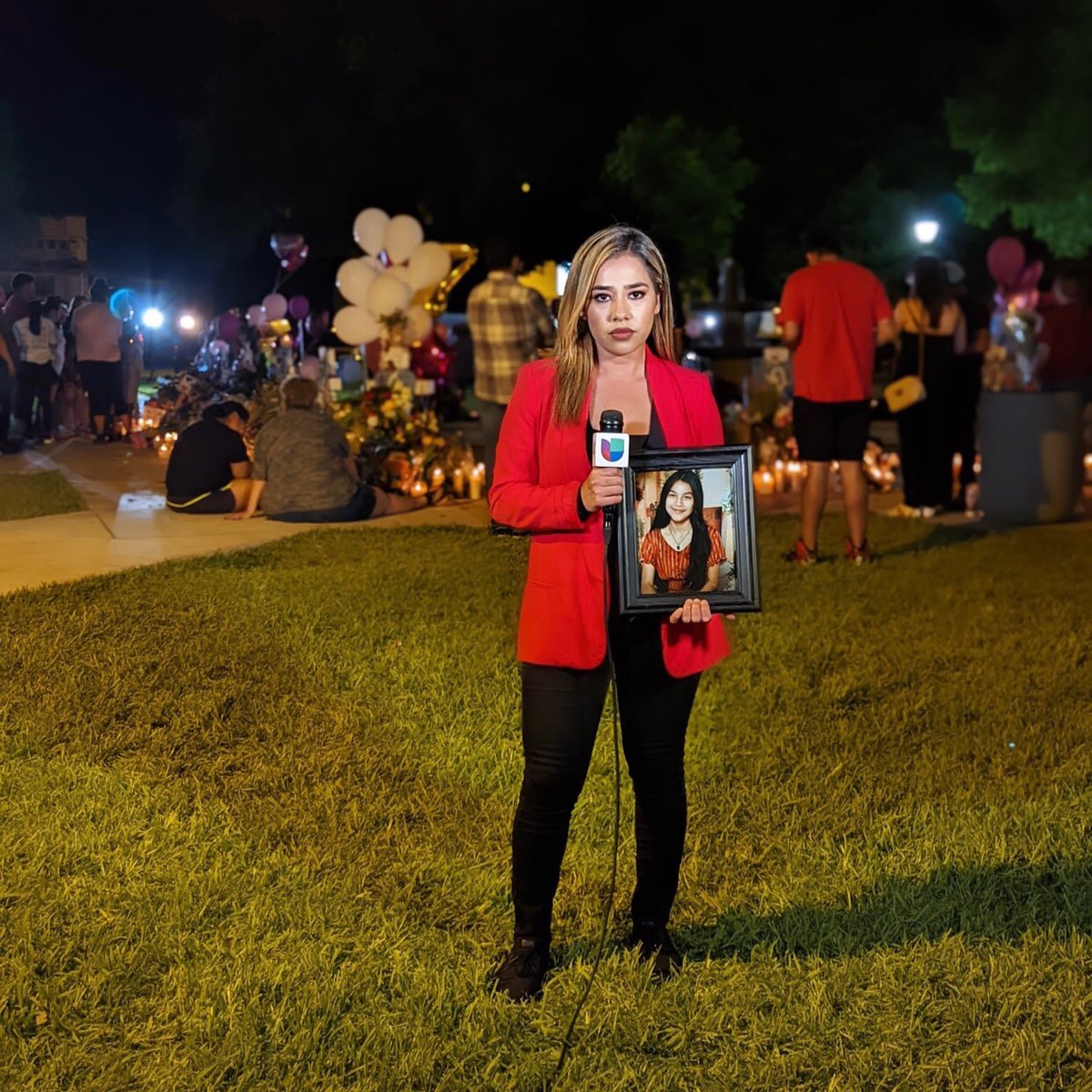 @AyannaPressley
TODAY is the day to deliver the bold, progressive leadership that all Texans deserve, now more than ever. If you vote in the TX-28, polls are OPEN - find your polling location and let’s Get Out The Victory for @JCisnerosTX! ➡️https://t.co/DKz1hSQEz2 https://t.co/k2mXNydE2F
24 May, 2022 - 07:33 PM UTC

@MeetThePress
WATCH: @GarrettHaake reports from Laredo, Texas as Democrats Cuellar & Cisneros are in a runoff. Some voters are seeing “these names on their ballot for the first time” because of redistricting. @JCisnerosTX: “We’ve been running on health care. That includes abortion care.” 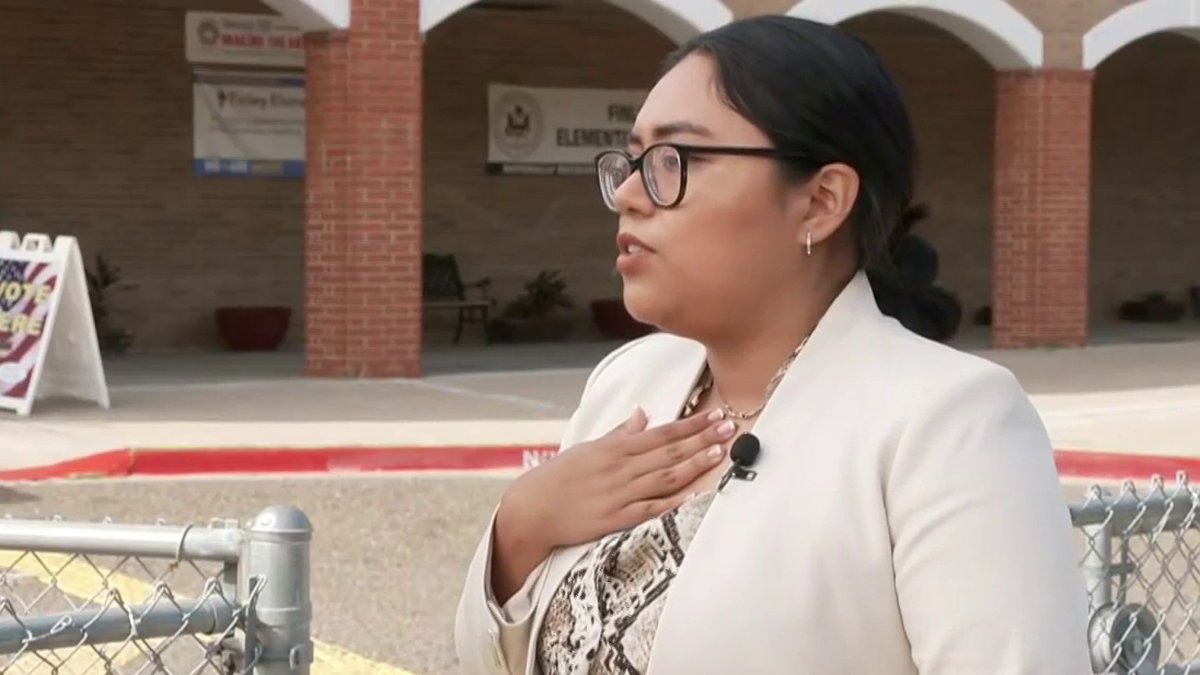 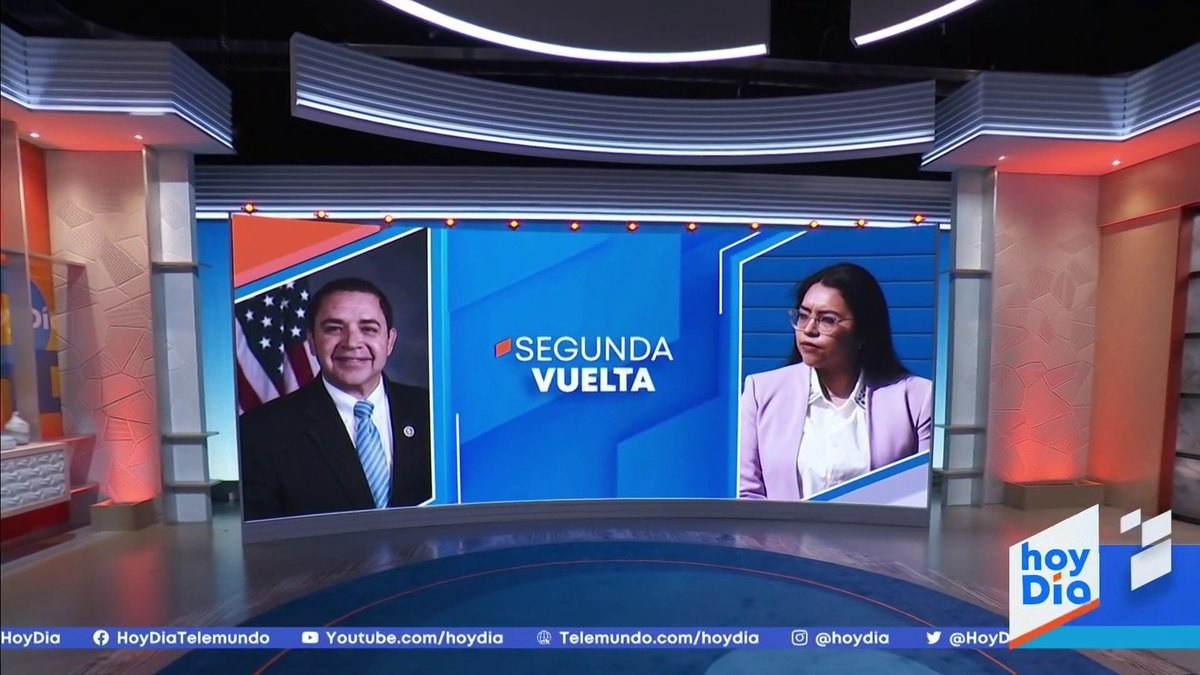 @TeenVogue
Today’s the day: It’s the runoff election between @JCisnerosTX and Henry Cuellar, the last anti-abortion Democrat in the House of Representatives. https://t.co/YCpqko93zZ
24 May, 2022 - 12:55 PM UTC

@BernieSanders
TEXAS 28: today is your chance to get out and VOTE to send @JCisnerosTX to Washington to fight for the working class. Jessica will take on corporate greed, and stand up for a living wage and Medicare for All. Polls are open NOW until 7 PM CT. VOTE! VOTE! VOTE! 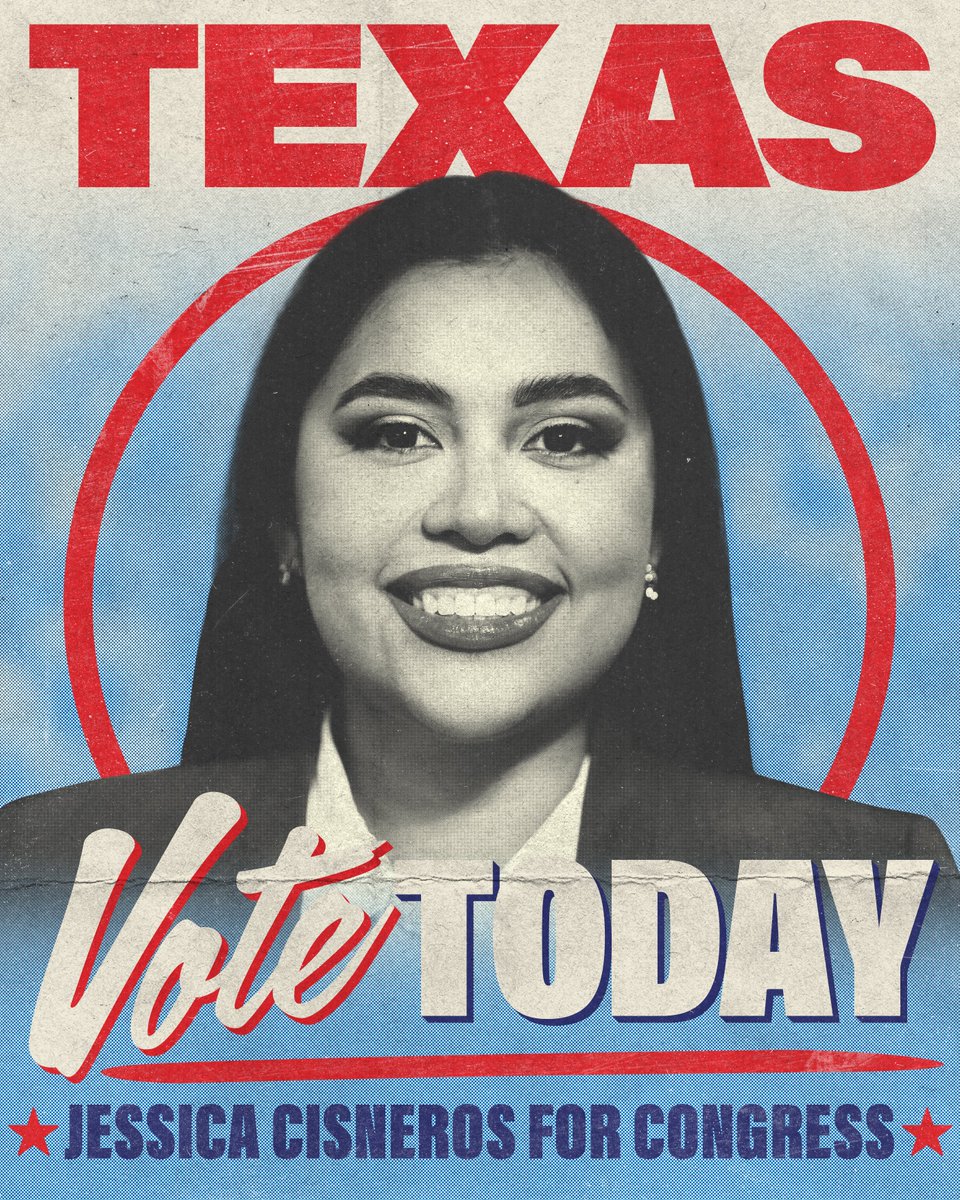