@JuliaEAinsley
This new policy will go into effect in November and will not apply to undocumented immigrants, who will still be subject to immediate expulsion, regardless of vaccination status. https://t.co/AhW7hdxd78
13 Oct, 2021 - 01:50 PM UTC

@JuliaEAinsley
New: DHS knew thousands of Haitians were potentially coming to the US as far back as July, but disagreed over whether to deport Haitians after the earthquake https://t.co/iwbH1Ymas9
07 Oct, 2021 - 10:34 AM UTC

@JuliaEAinsley
An update on our piece on @NBCNightlyNews tonight. Right after airing on the East Coast, the DC Circuit Court sided with the Biden admin, allowing Title 42 to remain in place. So asylum seeking families may continue to be blocked for the time being.
30 Sep, 2021 - 11:15 PM UTC

@JuliaEAinsley
New: In a call with DHS officials earlier this week, Mayorkas asked components to prepare for a surge of 350-400K next month if a circuit court does not intervene Thursday to stop Title 42 from being lifted. https://t.co/6kmrSMqI9m
30 Sep, 2021 - 10:42 AM UTC

@JuliaEAinsley
New developments tonight: DHS monitoring a group of 20K+ Haitians gathered in Colombia for possible migration to the U.S.; CBP’s Office of Professional Responsibility is investigating the incident captured in the photo of the border agent on horseback https://t.co/adIpAAANw7
21 Sep, 2021 - 02:21 AM UTC

@JuliaEAinsley
Many have asked who will be safeguarded from deportation as the Biden administration responds to the overwhelming number of Haitians in Del Rio. Here’s what we know about who can stay to seek asylum: https://t.co/u3cj9cAqaj
20 Sep, 2021 - 01:07 PM UTC

@JuliaEAinsley
I’ll be on @MSNBC and @NBCNewsNow all morning covering the latest developments on deportations of Haitians from Del Rio, including who is being deported and who is allowed to stay to seek asylum. Thanks @WayTooEarly See you soon @Morning_Joe
20 Sep, 2021 - 09:37 AM UTC

@JuliaEAinsley
Breaking: The Biden administration has appealed the district court’s decision to block Title 42, arguing it is in the interest of public health to deport families before they can seek asylum.
17 Sep, 2021 - 07:48 PM UTC

@JuliaEAinsley
According to internal documents, at the direction of Secretary Mayorkas, ICE will begin ramping up deportations and lateral flights of Haitians starting next week: https://t.co/IC2sW4qmxk
17 Sep, 2021 - 04:55 PM UTC

@JuliaEAinsley
Melissa Smislova, deputy under sec for intelligence, says DHS is doing a better job sharing info w/ law enforcement ahead of Sept 18 than it did before Jan. 6. Says lack of info leading into 1/6 may be attributed to “lack of discipline, complacency.” https://t.co/mEiNYv7p49
14 Sep, 2021 - 05:31 PM UTC

@JuliaEAinsley
Mayorkas: “I am incredibly saddened to see that everything about immigration falls in the epicenter of the tremendous divide that grips this country.” #hsef21
13 Sep, 2021 - 10:36 PM UTC

Eric Tucker
@etuckerAP
Prominent national security lawyer Ed MacMahon (a veteran of the Moussaoui case and ISIS Beatles cases, among many others) has submitted a motion in federal court in West Virginia to represent Diana Toebbe in submarine spy case.
13 Oct, 2021 - 06:23 PM UTC

@GeoffRBennett
On @MSNBC, @SecretaryPete suggests a COVID vaccine requirement for domestic air travel isn’t currently being considered. “So, here in the U.S., the discussion about vaccine requirements for travel has been on the international arrivals,” he tells me.
13 Oct, 2021 - 06:08 PM UTC

@RuhleOnMSNBC
.@JuliaEAinsley explains the latest legal back and forth over the restrictive Texas abortion law as similar legislation out of other states heads to the Supreme Court. @MSNBC 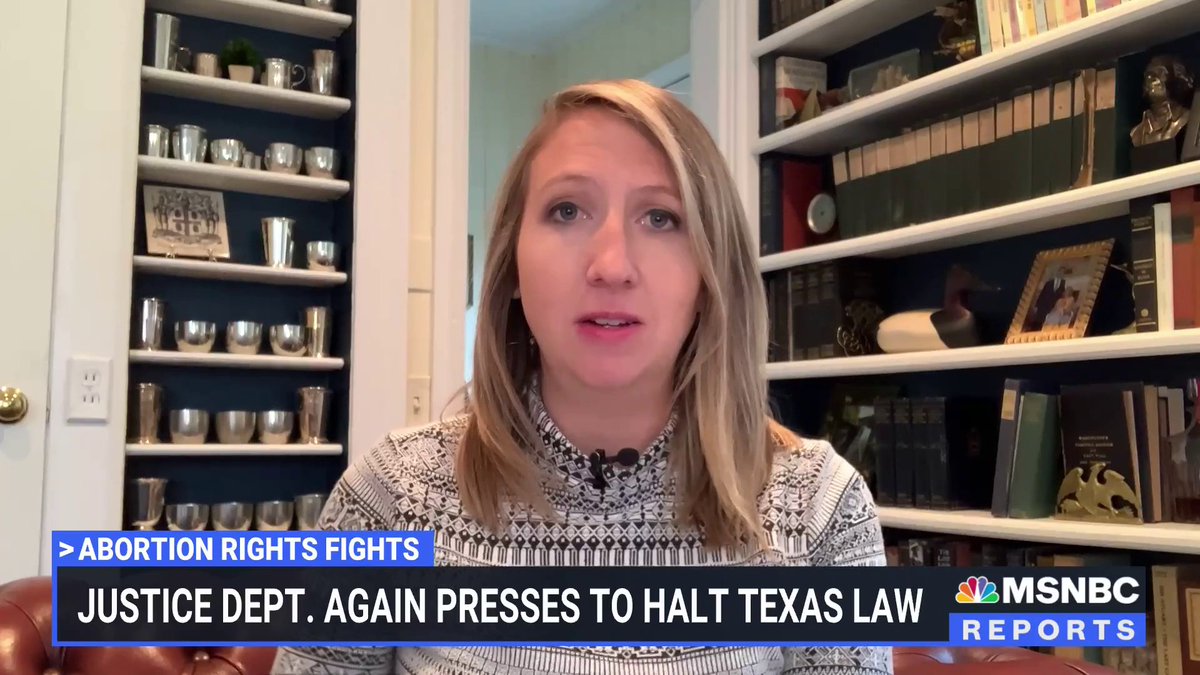 @NBCNewsNow
"Unconstitutional." The DOJ hits back in the ongoing legal battle over that controversial Texas abortion law. @JuliaEAinsley joined @joefryer on #MorningNewsNOW to break down the fight over one of the country's most restrictive abortion laws. https://t.co/U4UZMHn7bF 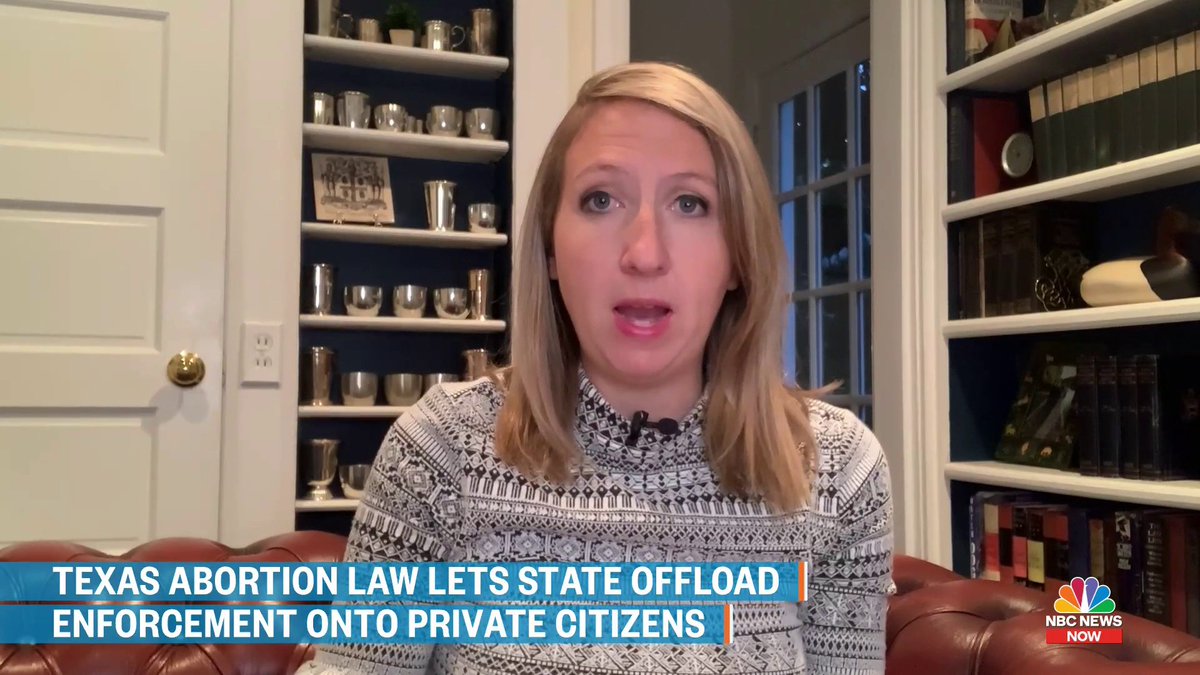 @NBCNewsPR
WEDNESDAY - An @NBCInvestigates Exclusive: @mitchellreports sits down with three of the original Havana Syndrome victims, now speaking out publicly and revealing their identities for the first time in an exclusive TV interview.  Tune in: @NBCNightlyNews Wednesday, 6:30 p.m. ET 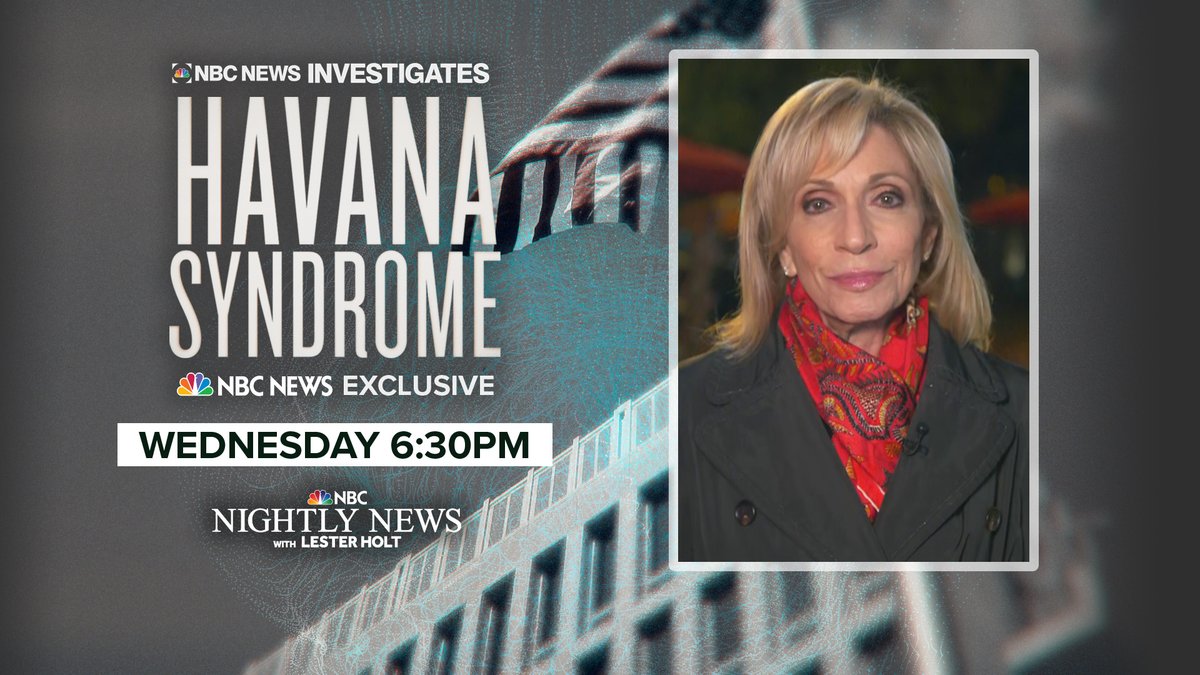 @jacobsoboroff
This weekend @60Minutes will cover the fallout from the Trump administration’s family separation policy, including the fact over 1,000 kids haven’t yet been reunited with their parents — and the Biden admin has only reunited 52 families. https://t.co/w7tMvHjJCw
07 Oct, 2021 - 08:03 PM UTC

Aaron Reichlin-Melnick
@ReichlinMelnick
In the last seven years, the Border Patrol has recorded just 63 arrests of people involved in the Latin Kings (now 64, I guess). This is only the 7th such arrest this year. That means that just 0.001% of all Border Patrol apprehensions over that period were Latin Kings members. https://t.co/fcodJSRoBj
07 Oct, 2021 - 03:49 PM UTC

@RuhleOnMSNBC
NEXT HOUR: @JuliaEAinsley has breaking coverage of the latest on abortion legislation out of Texas. @ProfMMurray and @BarbMcQuade join the conversation, and explain what it all means for the future of Roe v. Wade. Tune into @MSNBC at 9 AM ET.
07 Oct, 2021 - 12:09 PM UTC

@NBCNewsNow
NBC News can reveal DHS was warned back in July that thousands of Haitians were planning to come to the U.S. @JuliaEAinsley explains how officials disagreed about deportations in the lead-up to last month's migrant surge. 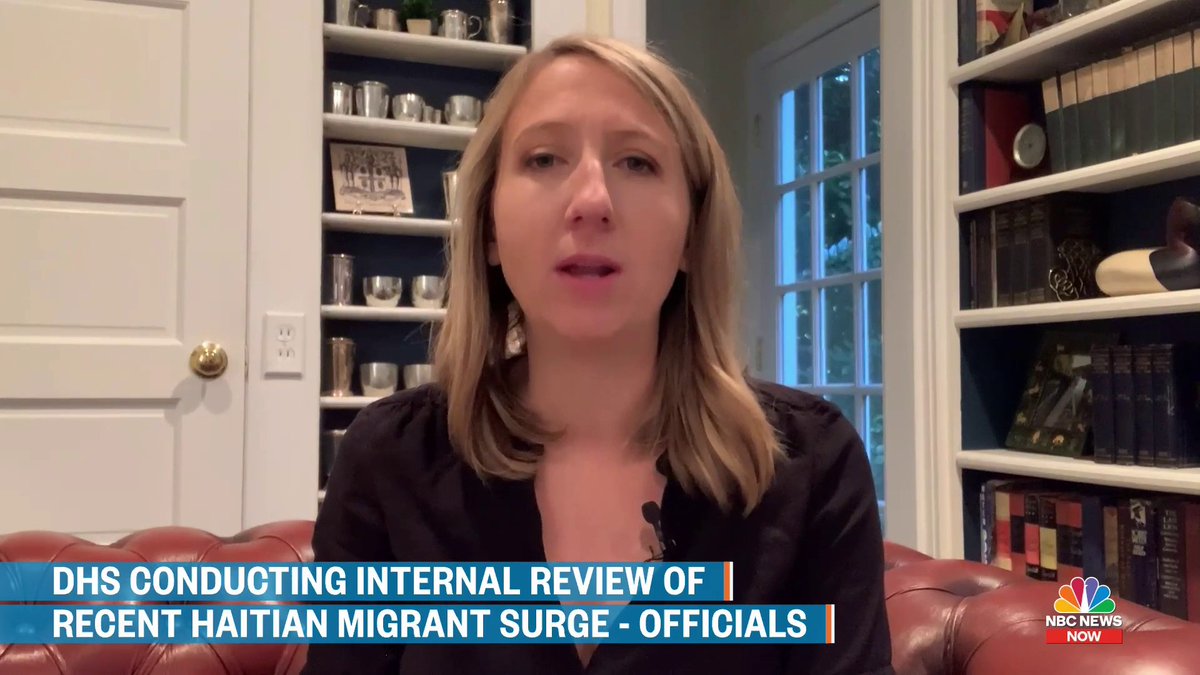 @gabegutierrez
Some 20,000 migrants — mostly Haitians— have crammed into Necocli, Colombia, as they make a dangerous trek to the U.S. 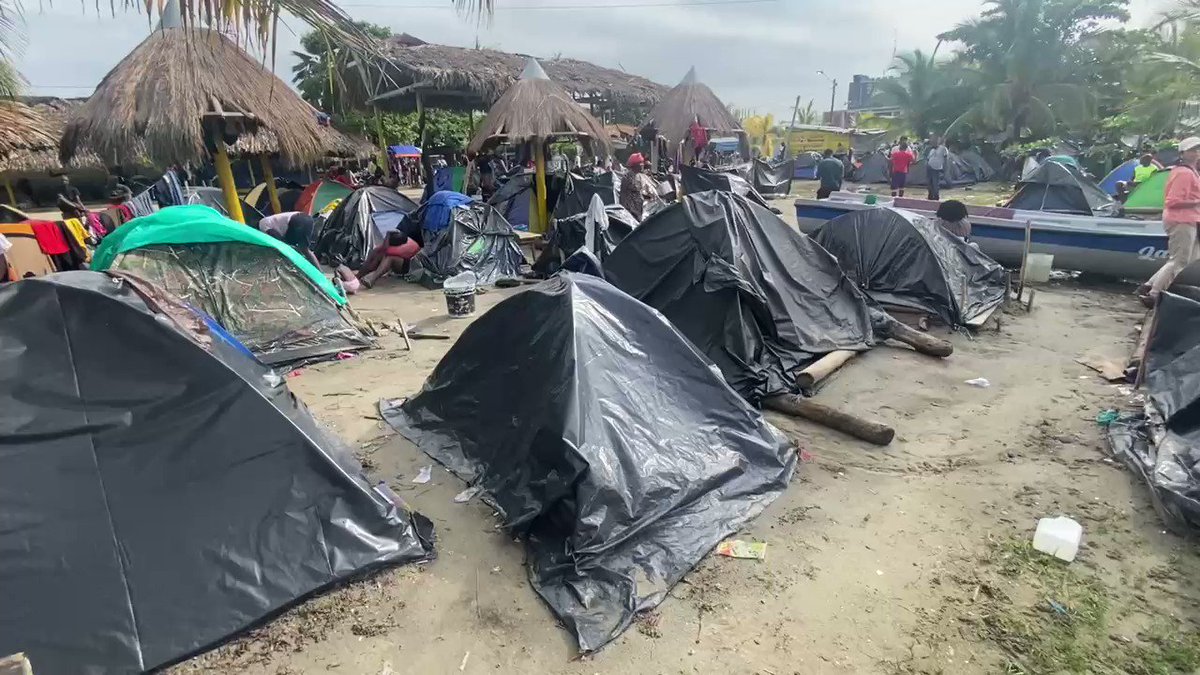 @jacobsoboroff
NEW: At this @MSF hospital in Tabarre, they treat trauma patients injured by gang violence every day. Our final dispatch from Haiti, which we filed for @aliciamenendez and her show last night. We'll have more reporting next week on @NBCNews and @MSNBC. 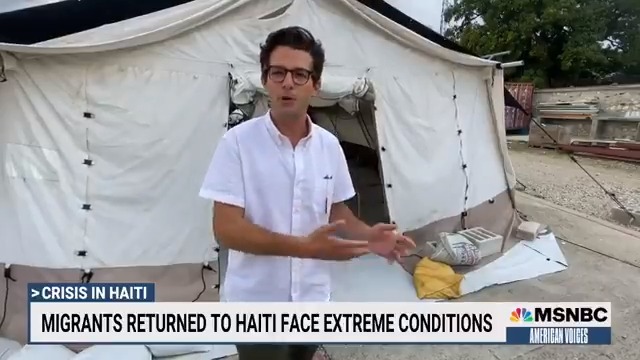 @jacobsoboroff
U.S. Coast Guard says it intercepted 202 Haitian migrants attempting to leave by boat yesterday. We will have more on conditions in Haiti coming up in the 1:30PM ET half hour with @AlexWitt. https://t.co/4krz2zUE11
02 Oct, 2021 - 04:34 PM UTC