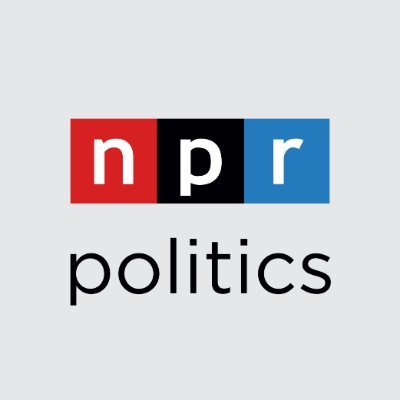 @nprpolitics
The results in Kansas — the nation's first statewide vote on abortion rights after Roe v. Wade was overturned in June — has upended traditional wisdom about the politics of abortion for both abortion rights supporters and opponents. https://t.co/CpMT3DGrKl
06 Aug, 2022 - 02:15 AM UTC

@nprpolitics
New research shows while more than a third of voters said they don't trust the process for counting votes in the U.S., after people were shown affirmative but nonpartisan messaging about democratic systems persevering, that number significantly improved. https://t.co/fvhQOcN9rp
06 Aug, 2022 - 01:35 AM UTC

@nprpolitics
Among the states with abortion rights ballot measures scheduled for November is Kentucky, where voters will consider a constitutional amendment similar to the one that failed in Kansas. https://t.co/fPkgwwFsNg
05 Aug, 2022 - 10:55 PM UTC

@nprpolitics
For election officials, countering falsehoods about America's voting process can feel like a game of whack-a-mole. But new research shows one method that might work: https://t.co/ekQbUll49J
05 Aug, 2022 - 10:15 PM UTC

@nprpolitics
Once Senate Democrats' spending bill gets introduced on the Senate floor — which Senate Majority Leader Chuck Schumer says will happen Saturday afternoon — up to 20 hours of debate, split evenly between Democrats and Republicans, will begin. https://t.co/4wGuPvtdcR
05 Aug, 2022 - 08:45 PM UTC

@nprpolitics
Three states will see ballot measures related to abortion rights on the ballot this fall. Both supporters and opponents of abortion rights are looking to the recent vote in Kansas for lessons: https://t.co/z4IXCuDywY
05 Aug, 2022 - 08:05 PM UTC

@nprpolitics
In what has essentially become an information war for the future of democracy, people driven by misinformation are acting on it. But new research shows one way to combat election lies could be successful: https://t.co/Y04zOZs7tr
05 Aug, 2022 - 07:25 PM UTC

@nprpolitics
On Tuesday, voters in Kansas overwhelmingly rejected a ballot initiative that would have opened the door to significant abortion restrictions. The vote has political strategists in both parties considering what impact it may have on the 2020 midterms: https://t.co/nHU3RASPje
05 Aug, 2022 - 04:45 PM UTC

@nprpolitics
The results in Kansas — the nation's first statewide vote on abortion rights after Roe v. Wade was overturned in June — has upended traditional wisdom about the politics of abortion for both abortion rights supporters and opponents. https://t.co/JYPF2rAURM
05 Aug, 2022 - 04:05 PM UTC

@nprpolitics
New research shows while more than a third of voters said they don't trust the process for counting votes in the U.S., after people were shown affirmative but nonpartisan messaging about democratic systems persevering, that number significantly improved. https://t.co/fYVuti9Utd
05 Aug, 2022 - 03:25 PM UTC

@nprpolitics
How 3 presidents announced the deaths of terrorist leaders and what it says about them https://t.co/sv4NhSxuuU
05 Aug, 2022 - 09:32 AM UTC

@nprpolitics
Republican and Democratic strategists are recalibrating how much of an issue abortion rights will play in the 2022 midterm elections after a decisive vote by Kansans in favor of abortion rights this week. https://t.co/cnxA5StOc1
05 Aug, 2022 - 02:35 AM UTC

@nprpolitics
The White House has declared monkeypox a public health emergency, which can free up resources to help the Biden administration respond to the outbreak. https://t.co/lfXrLR8qwA
05 Aug, 2022 - 01:55 AM UTC

@Ximena_Bustillo
NEW: There has been an agreement to include $4 billion for western water infrastructure and to combat drought (specifically also colorado and through bureau of reclamation) that will be included in the Dem reconciliation package.
05 Aug, 2022 - 08:38 PM UTC

@johnson_carrie
The Justice Department has charged 25-year-old Joshua Brereton with setting fire to a Planned Parenthood building in Kalamazoo, Michigan. Court papers say he posted a video to his YouTube channel talking about abortion policy and referring to abortion as “genocide.”
04 Aug, 2022 - 09:31 PM UTC

@asmamk
President Biden’s statement on the prison sentence handed down to Brittney Griner.

@NPR
BREAKING: Brittney Griner has been sentenced to 9 years in prison after a Moscow court found her guilty of drug charges. https://t.co/MvHgo40JAF 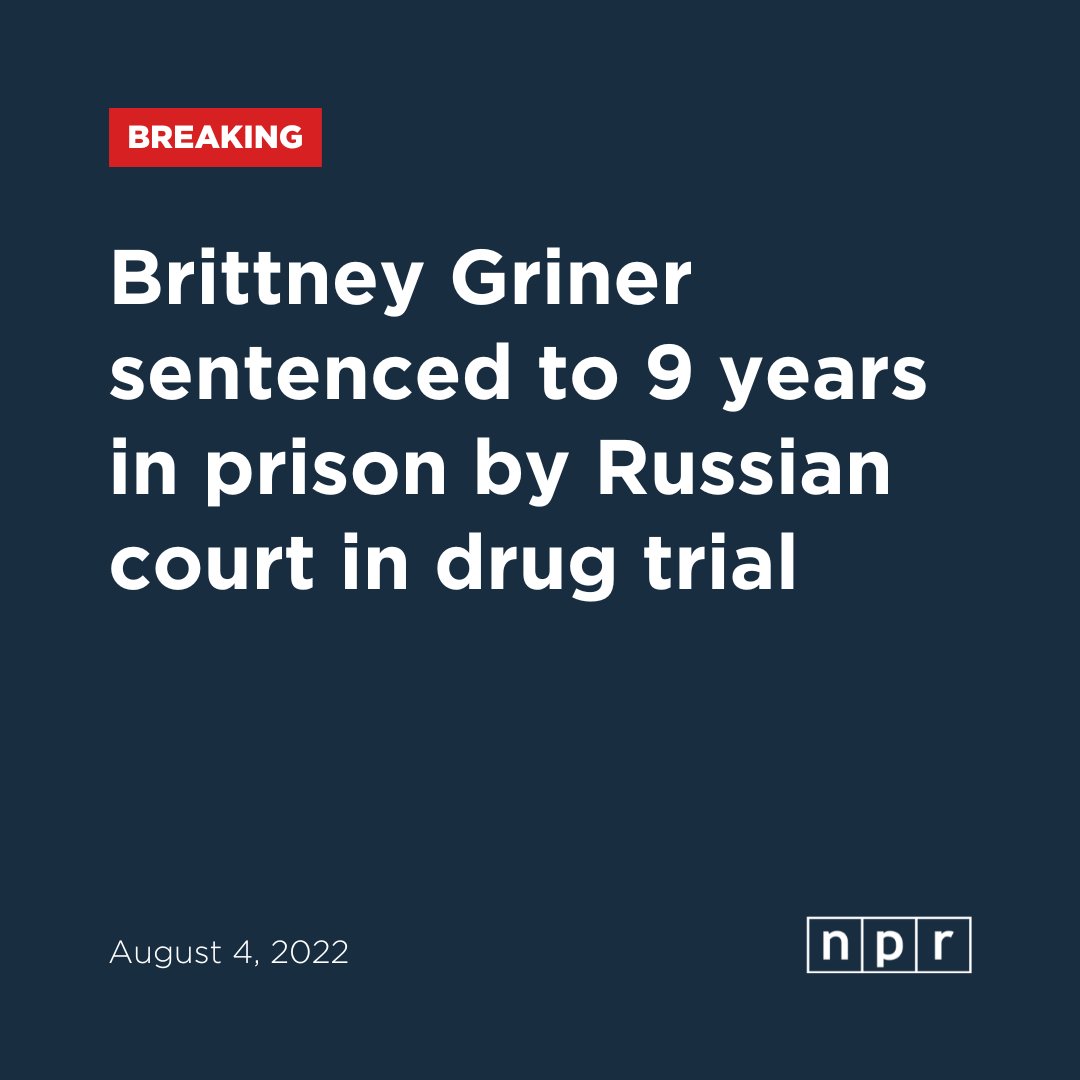 @johnson_carrie
Before today, only one officer faced local charges and was acquitted in Kentucky. "I have every degree of confidence in our prosecutors and investigators in this case," AG Garland says.
04 Aug, 2022 - 03:19 PM UTC

@johnson_carrie
Assistant Attorney General Kristen Clarke says two of the officers drafted and approved "what they knew was a false affidavit" to secure a search warrant for Breonna Taylor's home, depriving her of her constitutional right & setting off a chain of events resulting in her death.
04 Aug, 2022 - 03:13 PM UTC

@FrancoOrdonez
President Biden plans to hold a Rose Garden event Tuesday where he will sign a bipartisan bill to invest billions of dollars in domestic semiconductor manufacturing.
03 Aug, 2022 - 02:52 PM UTC

@EmilyZFeng
From @NPR @jruwitch: House Speaker Nancy Pelosi is due to land in Taiwan around 11am ET. Tomorrow, will meet Taiwan’s legislature+ President Tsai Ing-wen, who will give Pelosi an award. Pelosi then heads to a museum, before departing early eve, according to the source. https://t.co/WWAkf9OSf1
02 Aug, 2022 - 02:17 PM UTC

@titonka
Final day of voting in KS on the abortion amendment. A misleading text message telling voters to vote yes said in part: “voting YES on the amendment gives women a choice.” To be clear, voting yes opens up the possibility of tighter regulations, including a potential ban. 1/
02 Aug, 2022 - 01:30 PM UTC

@kcur
BREAKING: Former President Donald Trump has endorsed "ERIC" in Missouri's Republican primary for U.S. Senate. Except there are two running — Eric Greitens and Eric Schmitt — and both are claiming the endorsement is for them. https://t.co/ecBDK9vwmZ
01 Aug, 2022 - 11:13 PM UTC

@FrancoOrdonez
President Biden will deliver remarks tonight on a counterterrorism effort. Biden official: “Over the weekend, the US conducted a counterterrorism operation against a significant Al Qaeda target in Afghanistan. The operation was successful and there were no civilian casualties.”
01 Aug, 2022 - 09:18 PM UTC

@titonka
Talked to voters about the KS abortion amendment. And a thing I’ve heard a couple of times now is that voters who hadn’t thought much about abortion before really care about it now. LISTEN! >>> https://t.co/4qiN8l17HU
01 Aug, 2022 - 04:02 PM UTC
@nprpolitics's