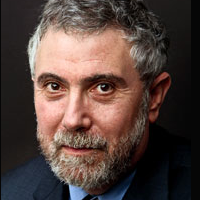 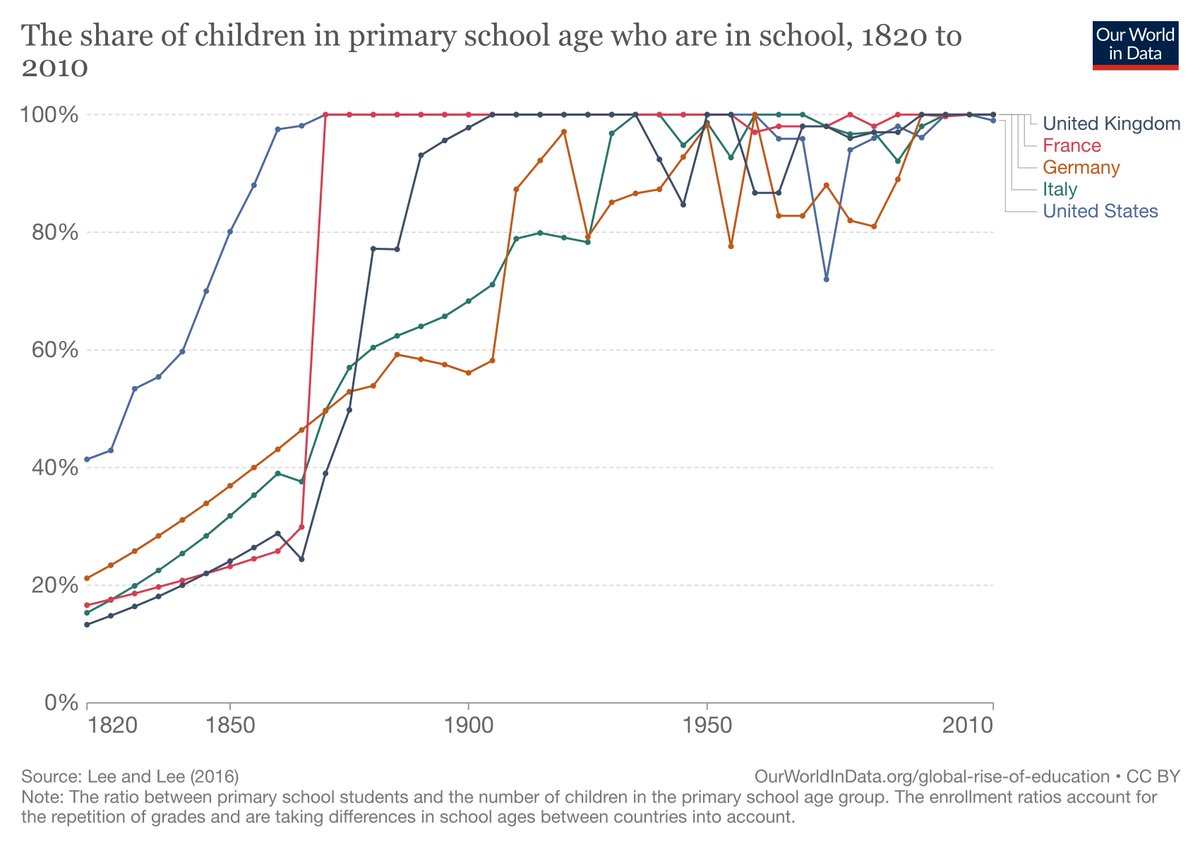 @paulkrugman
Responses to this are pretty wild. Folks, FRED isn't "The Fed". It's an (invaluable) database maintained by one of the regional Feds; its blog is meant to provide interesting notes on a variety of topics using that database. But these days everything is political ... https://t.co/kvZmt9Jqip
21 Nov, 2021 - 05:18 PM UTC

@paulkrugman
The two parties are not the same 1/ 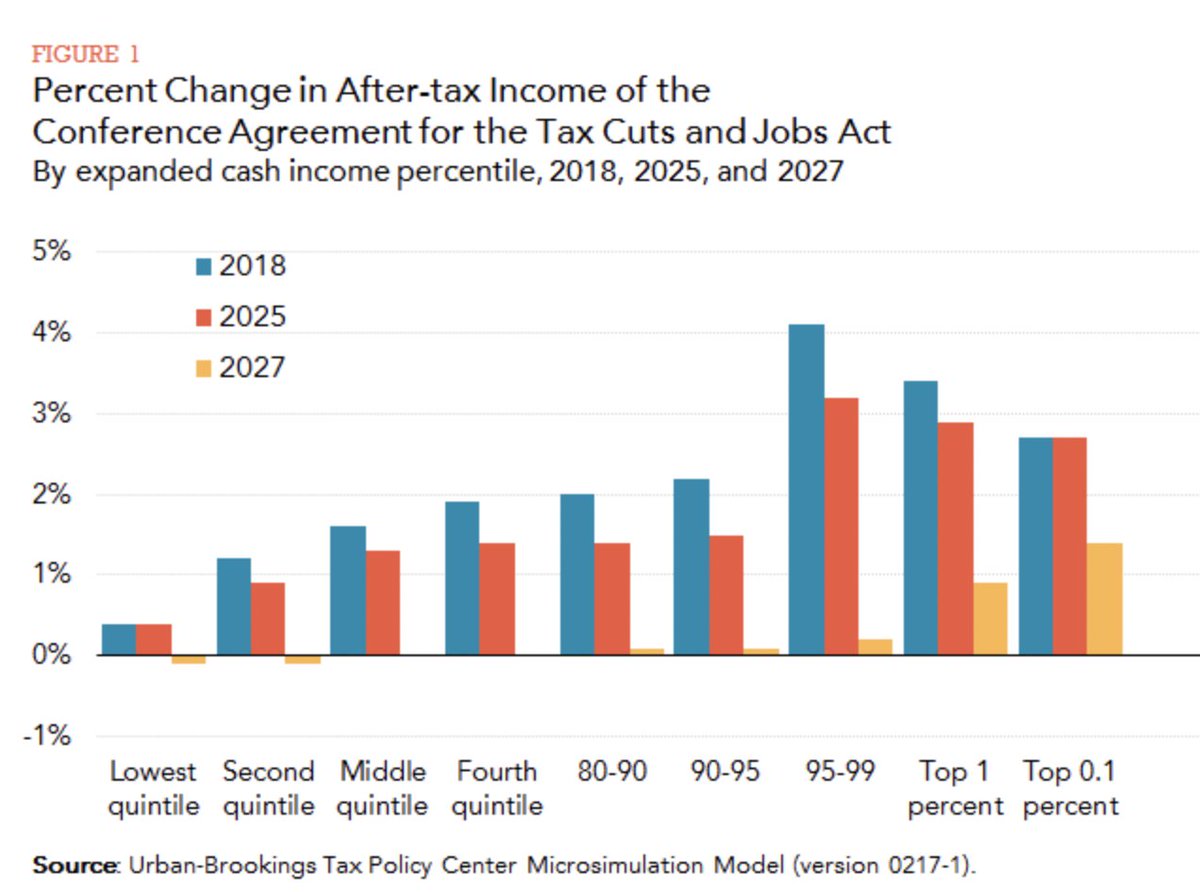 @paulkrugman
Do we want to slow the whole economy because bottlenecks are causing some prices to rise? https://t.co/zyeliGRjFk
19 Nov, 2021 - 07:20 PM UTC 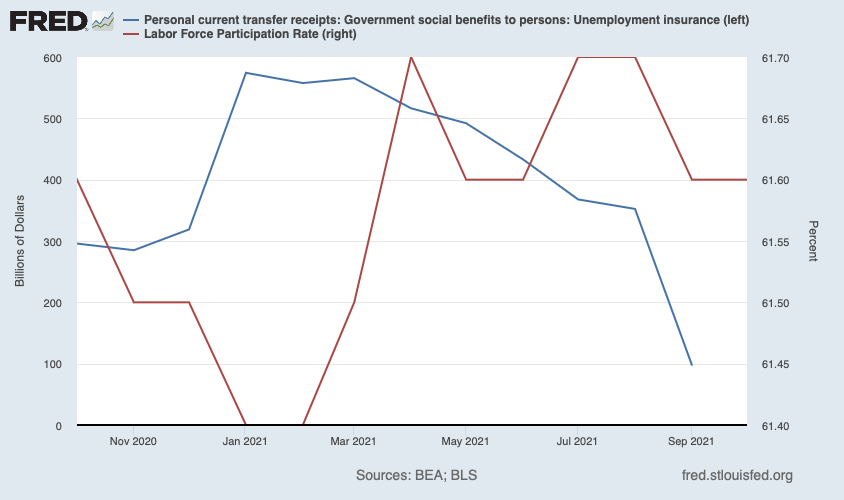 @paulkrugman
Seeing some news stories leading with "CBO says BBB will raise deficit" then acknowledging that it's bc CBO is probably underestimating revenue gains from a stronger IRS. Which is true but kind of misses the bigger point: $160 billion is tiny 1/
19 Nov, 2021 - 12:25 PM UTC

@paulkrugman
So basically CBO says BBB is AOK. Paid for within margin of error — not that pay-fors are important when real interest rates are negative and you're investing in the future. Fiscal "responsibility" is no reason to vote against this.
19 Nov, 2021 - 12:11 AM UTC

@paulkrugman
Need to guard against wishful thinking, but there do seem to be straws in the wind suggesting that supply-chain issues are getting less serious. Here's the Baltic Dry Index of shipping costs 1/ 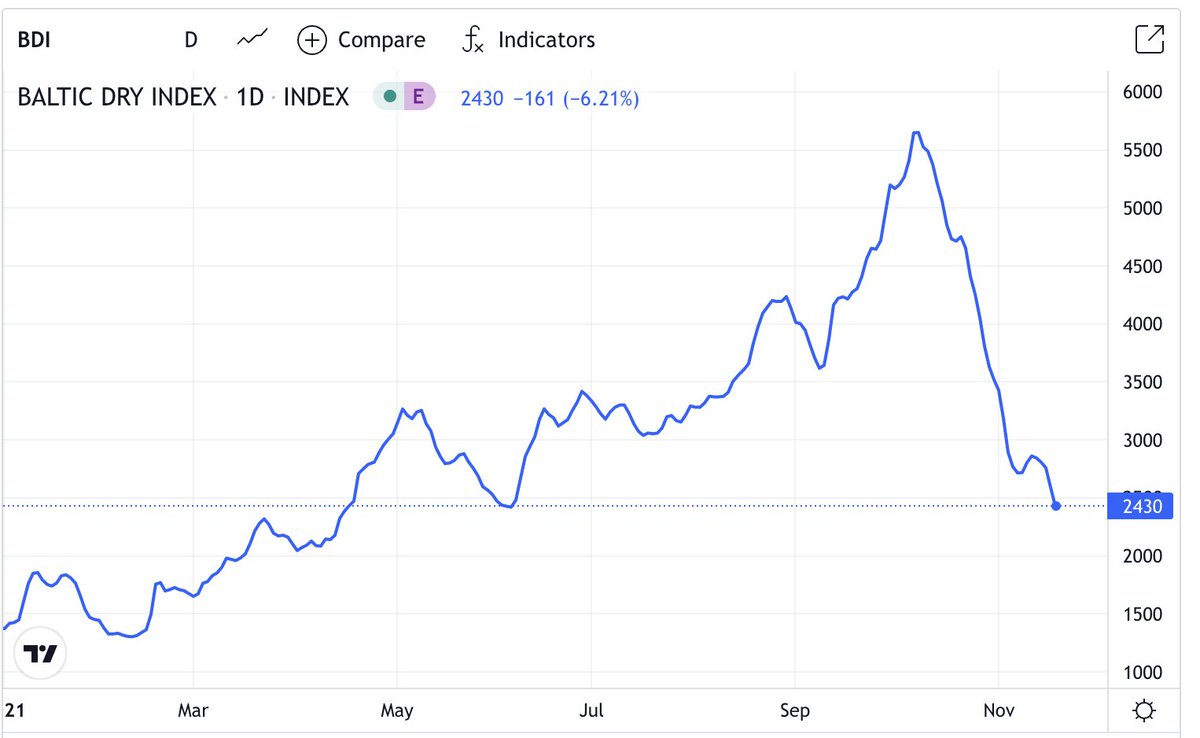 @paulkrugman
Some further thoughts on inflation and what to do next. Inflation has of course come in much higher than Team Transitory predicted — the Fed was predicting only 2.4% PCE growth as late as March. So the inflation worriers have in a way been vindicated, but ... 1/
18 Nov, 2021 - 02:31 PM UTC

@nytopinion
Sometimes you want to keep the punch bowl available. @PaulKrugman on how the thinking on interest rates has evolved. https://t.co/xU39TMHj70
23 Nov, 2021 - 05:52 PM UTC

Arindrajit Dube
@arindube
I usually wouldn't comment on a N=8 scatterplot, but this particular example turns out to be very useful pedagogically, illustrating the impact of a single, *high leverage*, observation can have on the fitted regression slope. Inclusion of US (just 1 data point) flips the sign. https://t.co/sTZjouw3on 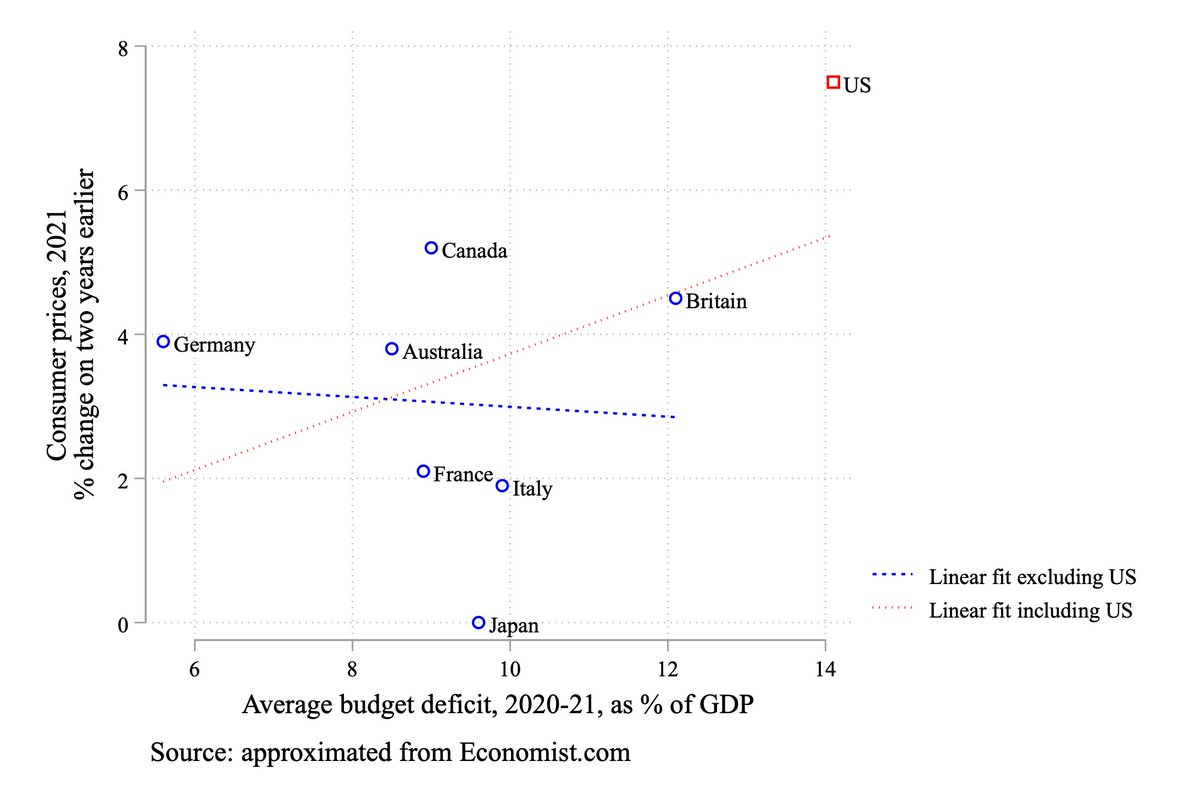 Invictus
@TBPInvictus
Although I am not sure I am on board yet for Paul’s mea culpa, ask yourself how many commentators you ever see acknowledging potential error in the first place. Precious few. 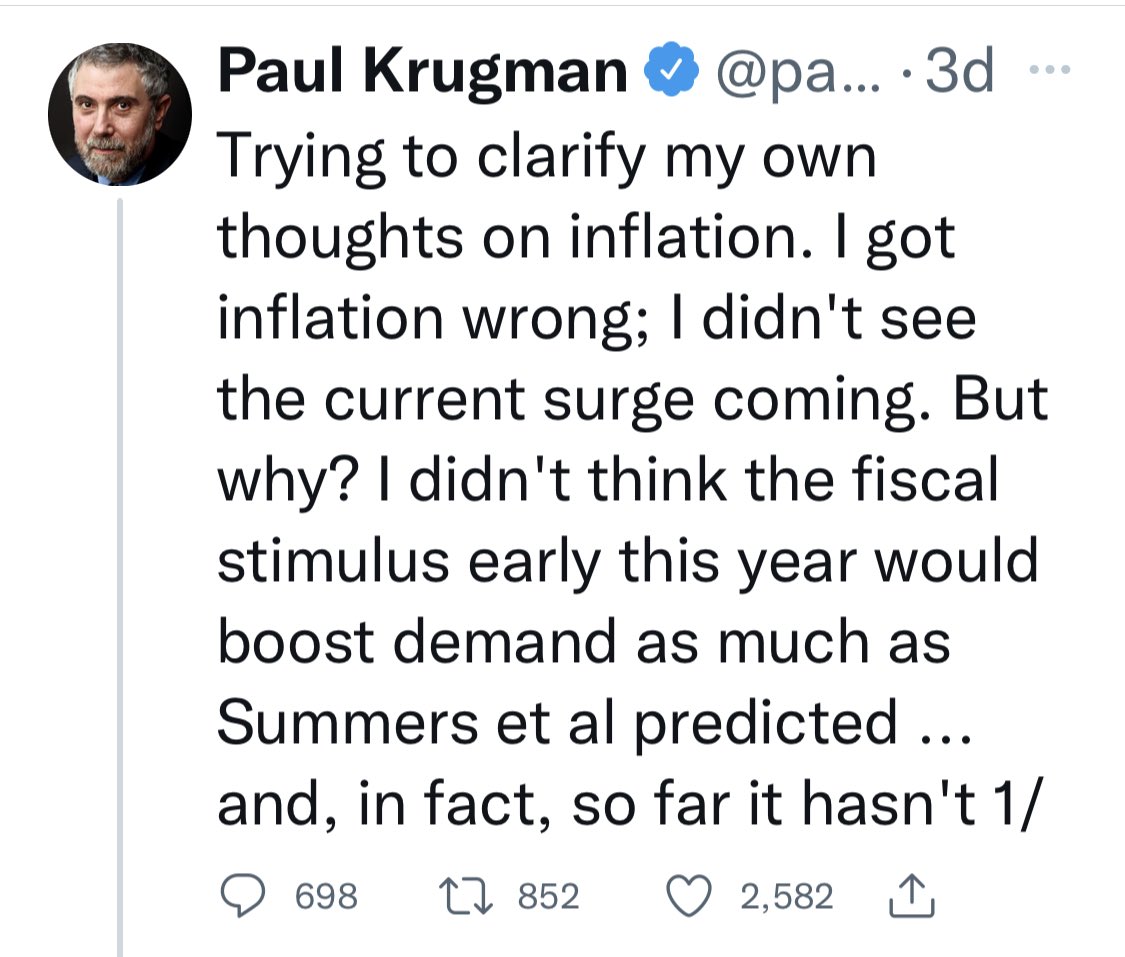 @charliebilello
US Retail Sales hit another all-time high while Consumer Sentiment is at its lowest level in 10 years. Watch what they do, not what they say. 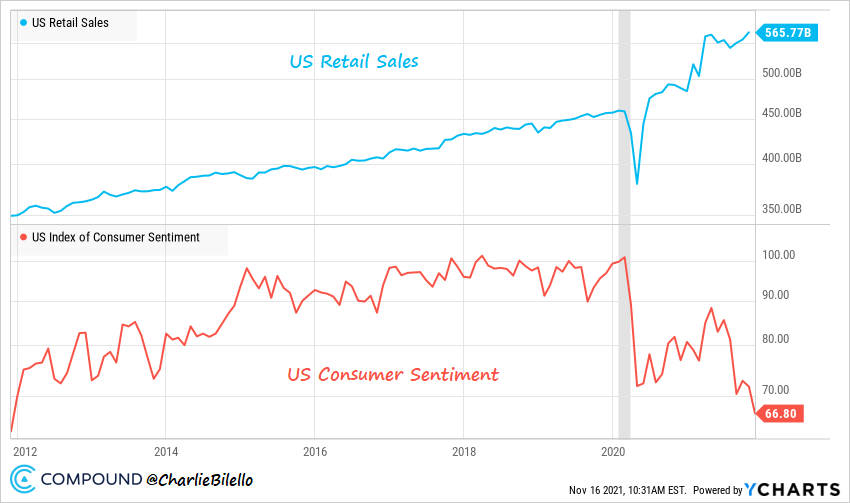 Joe Weisenthal
@TheStalwart
Republicans feel worse about the economy today than they did in March 2009. I know someone is going to accuse me of being "out of touch" but I mean, come on. 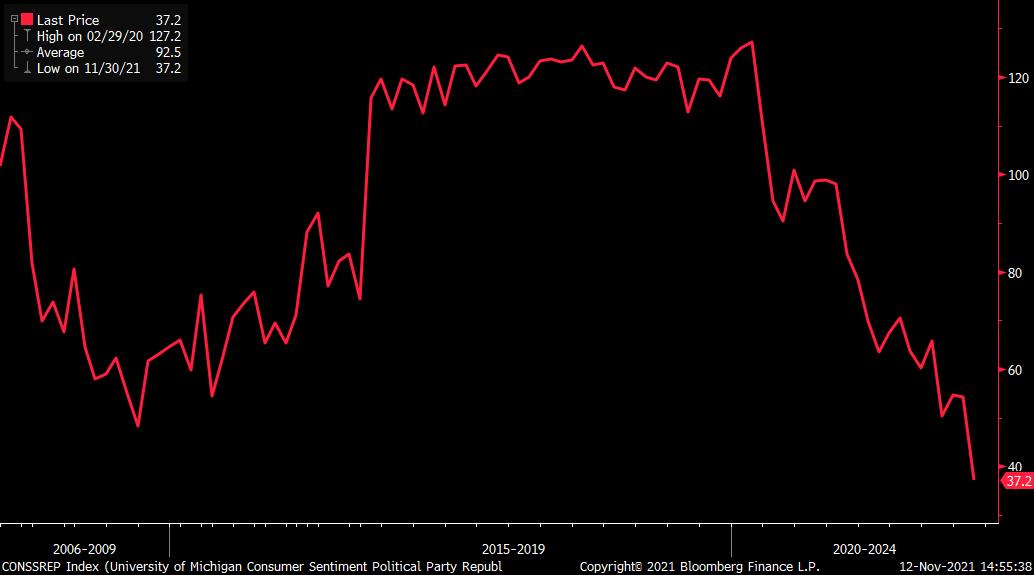 Joe Weisenthal
@TheStalwart
Why does the trucking industry have such a hard time retaining drivers? How many people want to have a career that involves waiting in a 600-person line to take a shower. https://t.co/S3fXVJbz65
12 Nov, 2021 - 01:21 PM UTC

@chrislhayes
The entire economy feels a bit like the moment a big concert or playoff game ends and everyone's trying to get out of the parking lot. "Transitory" can last a maddeningly long time, but the conditions that produce it are, indeed, temporary not strucural.
10 Nov, 2021 - 04:55 PM UTC 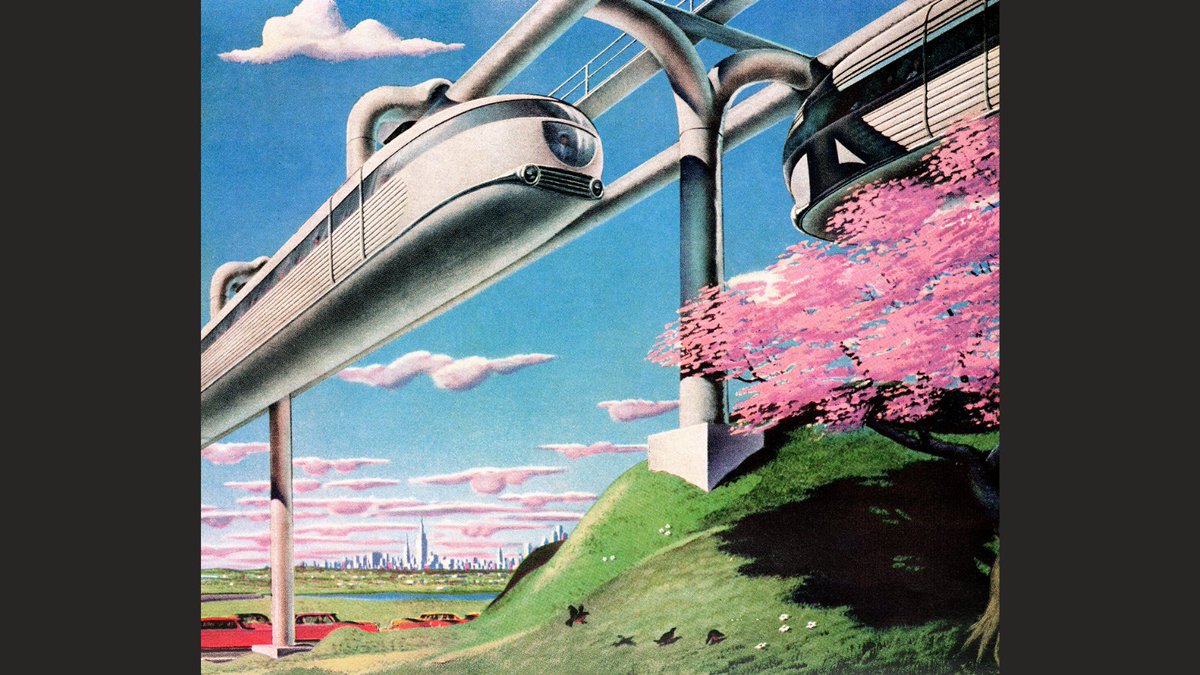 @sahilkapur
The peculiar situation Dem leaders now face: some of the same holdouts demanding a CBO score showing Build Back Better is fully paid for are also strong supporters of the infrastructure bill, which CBO says is NOT paid for and adds $256 billion to the debt.
05 Nov, 2021 - 05:50 PM UTC

@rortybomb
The initial August jobs number of 235K started a wave of economic panic in the press. It was actually 483K, nearly half a million jobs (!). September's 194K, which signaled malaise, is revised to 312K. Revisions are big in 2021, averaging 99K/month; press hasn't managed it well. 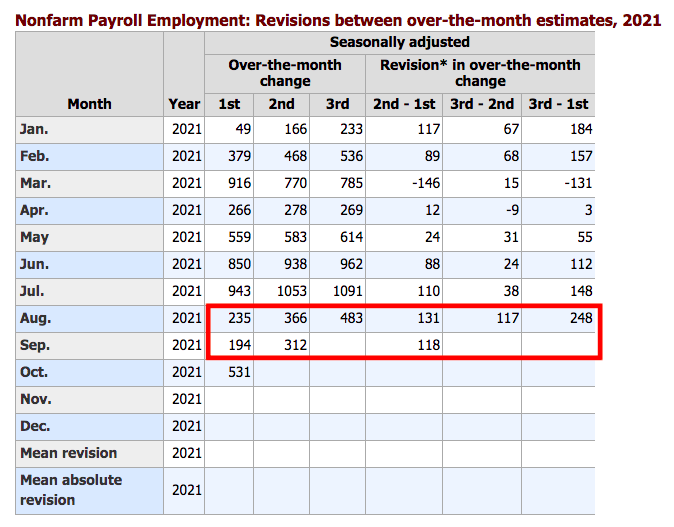 @nytopinion
Why do people with more money than anyone can use insist on keeping it all? Read the latest from @PaulKrugman. https://t.co/XfdaOV7d7n
02 Nov, 2021 - 04:36 PM UTC