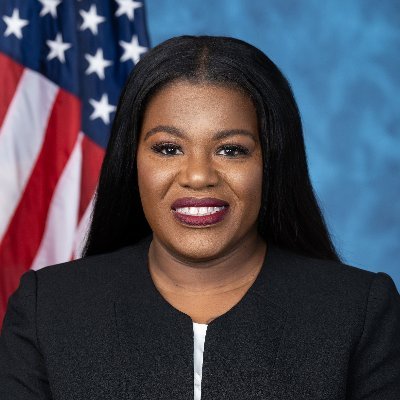 @RepCori
The Civil Rights Act mandates that entities that racially discriminate are ineligible for federal funding. We know there is a systemic racism crisis in police departments across the country. I asked AG Garland to commit to withholding federal funding from these departments. 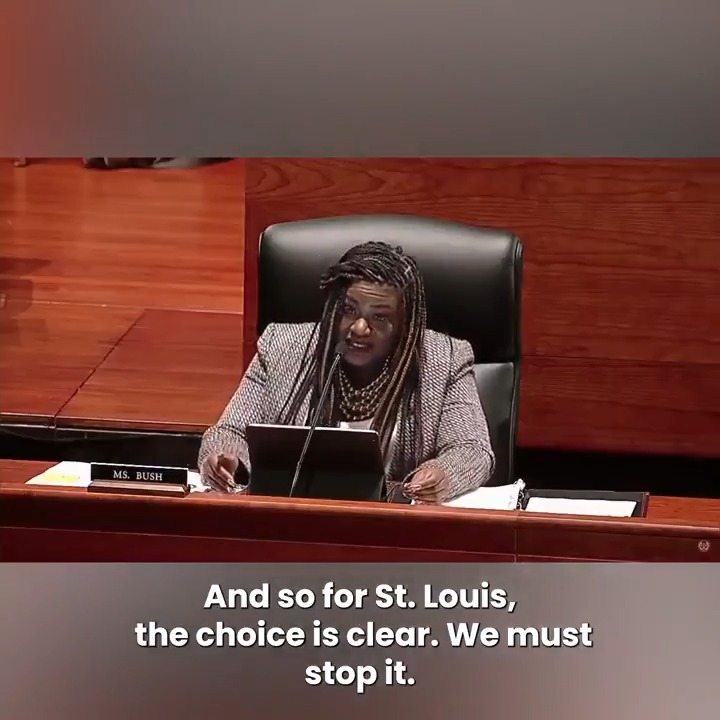 @RepCori
Senate Republicans blocked the Freedom to Vote Act. They don't want Election Day to be a federal holiday. They don't want to allow same-day voter registration. They don't want you to be able to cast your ballot. The Senate needs to abolish the filibuster now.
21 Oct, 2021 - 06:48 PM UTC

@RepCori
There are more than 130,000 people in Missouri's First District receiving Social Security benefits — many of whom can barely make ends meet. I'm proud to cosponsor @RepJohnLarson's Social Security 2100: A Sacred Trust to enhance and expand benefits.
21 Oct, 2021 - 12:08 AM UTC

@RepCori
The United States is the only major country in the world that does not guarantee paid leave. The only one. We cannot let our country go through a pandemic that has killed more than 700,000 people without changing that. Paid leave needs to remain in the Build Back Better Act.
20 Oct, 2021 - 11:02 PM UTC 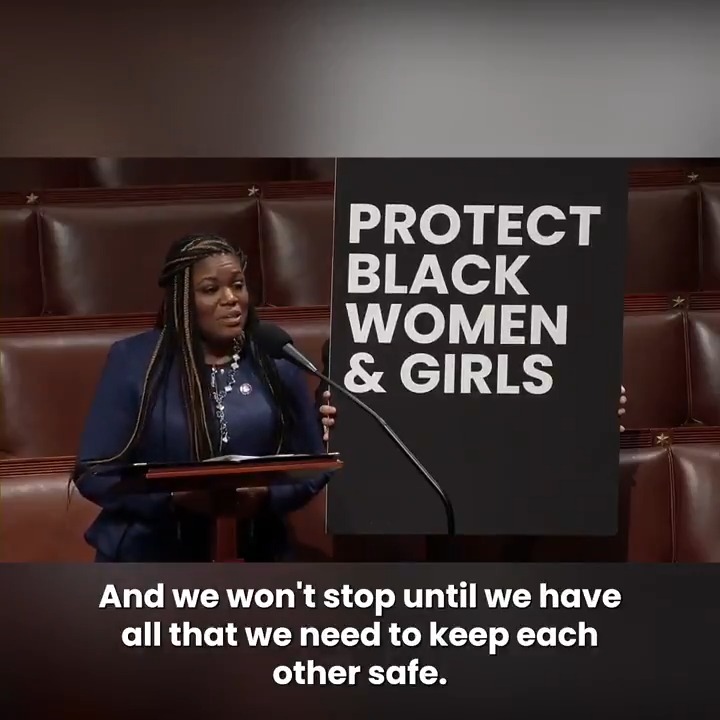 @RepCori
7 years ago today, Laquan McDonald was murdered by a police officer in Chicago. 7 years ago today, Rahm Emanuel began his coverup of what actually happened that night. Today, the Senate is considering Emanuel for Ambassador to Japan. I implore my Senate colleagues to vote 'No'. https://t.co/B1rxR7nQPT
20 Oct, 2021 - 06:30 PM UTC

@RepCori
Wow. @GovParsonMO cut off federal pandemic unemployment benefits without looking at the data on what may happen if he did. So what happened? Thousands lost lifesaving benefits and there was no change in unemployment. That is reckless endangerment of your own constituents. https://t.co/L13PZ6Tcfo
19 Oct, 2021 - 10:12 PM UTC

@RepCori
Why means testing is bad — in 3 simple steps: 1) It costs a ton to set up and administer, which 2) Takes money from the program itself, which 3) Leads to many who need the program the most — often Black and brown folks — to be excluded. No means testing in Build Back Better.
19 Oct, 2021 - 08:37 PM UTC 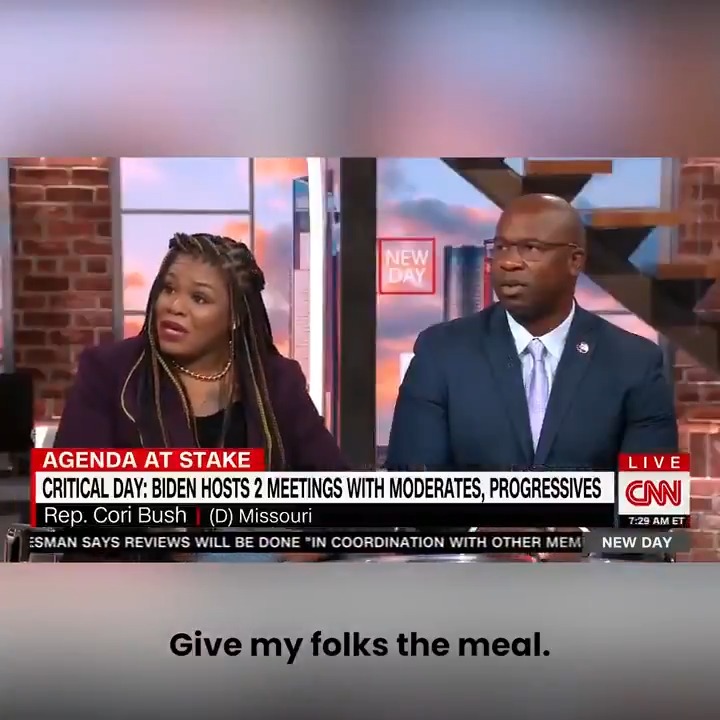 @RepCori
Ahead of St. Patrick Center’s warehouse shelter closing at the end of the month, I stopped by to discuss our work on securing alternative housing for the residents. It’s critical that our unhoused community members continue to have access to safe housing and supportive services. 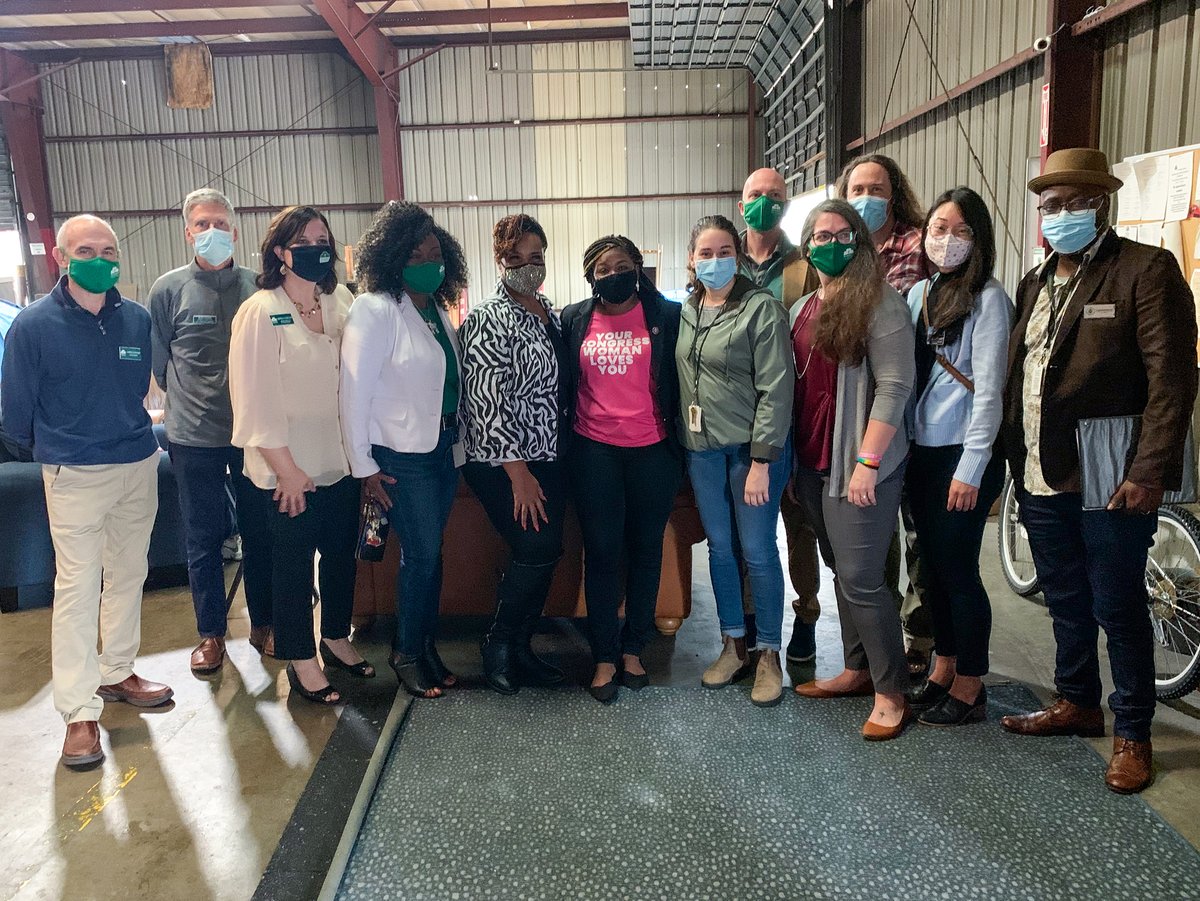 @RepCori
Ahmaud Arbery was hunted down and lynched by white supremacists. As the trial for his killers begins, it's absolutely imperative that there is accountability for their cruel act of hatred. https://t.co/5ztTK8WG0E
18 Oct, 2021 - 07:35 PM UTC

@RepCori
Tear gas is not an inconvenience, it is a weapon of war. I know what it’s like to have tear gas fired at me — my eyes, skin, and lungs burning in the fog of that horrific weapon — and to desperately search for something to relieve the terrible pain. It must be banned. https://t.co/AAn82pRoSb
15 Oct, 2021 - 07:14 PM UTC

@RepCori
Let’s make this clear: It was @GovParsonMO who failed to secure teachers’ SSNs. There’s no ‘hacking’ here. There’s an effort to criminalize journalists. Shame on you, Governor. https://t.co/hqgnlZeYJB
15 Oct, 2021 - 03:18 PM UTC

@RepCori
We must create a world where folks who are ready can get back to work during the pandemic. To name a few, we need: — Min. wage of at least $15 — Guaranteed childcare and health care — Vaccine for all ages Until we have these, federal unemployment benefits must be continued.
14 Oct, 2021 - 09:19 PM UTC

@RepCori
I’m glad to see that with community organizing and trustworthy communication, the racial COVID-19 vaccine gap is shrinking. It's so critical that our communities get vaccinated. Visit https://t.co/0GuzJSaiKc to find the vaccine nearest to you. https://t.co/T74QWjhXvI
14 Oct, 2021 - 07:35 PM UTC

@RepRoKhanna
The fossil fuel industry received billions in federal relief in 2020 in the midst of a global climate crisis and pandemic. It’s unacceptable. Let's put an end to the subsidies. https://t.co/NS8RIHzwg3
15 Oct, 2021 - 01:01 PM UTC

@saintlouismayor
We're so excited that @RepCori has partnered with @STLpubLibrary to bring her office's constituent services team into two of our libraries in St. Louis City. They can provide help with navigating federal agencies, tax resources, and much more! Check out their schedule ⬇ 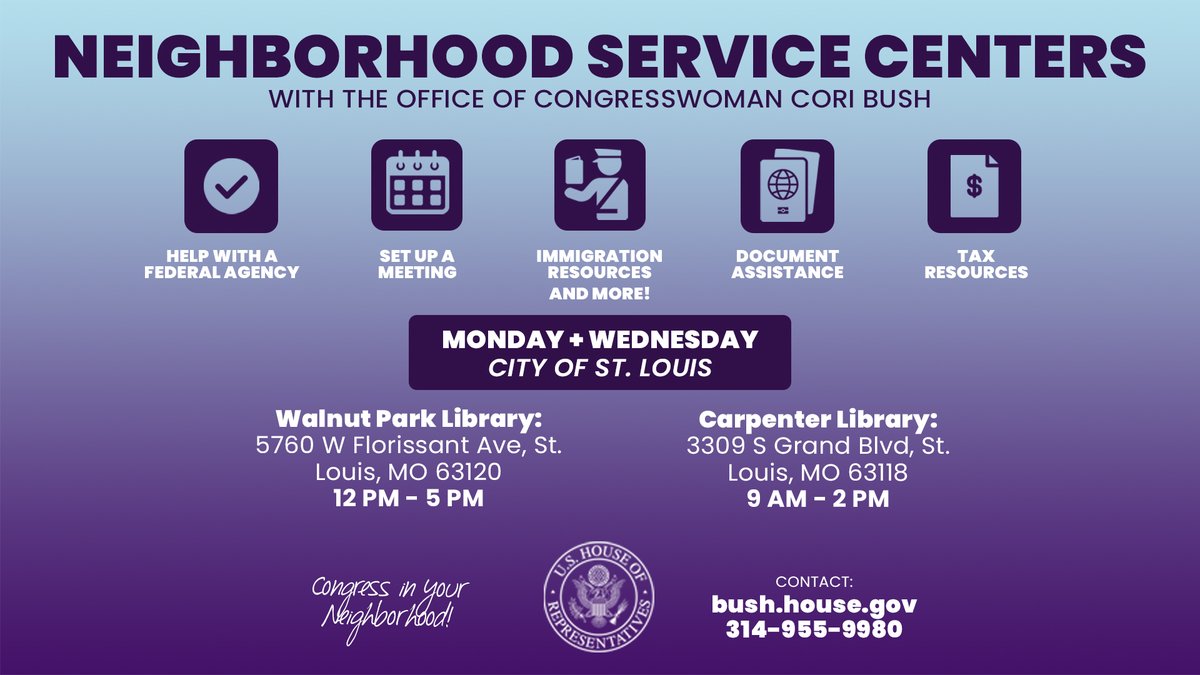 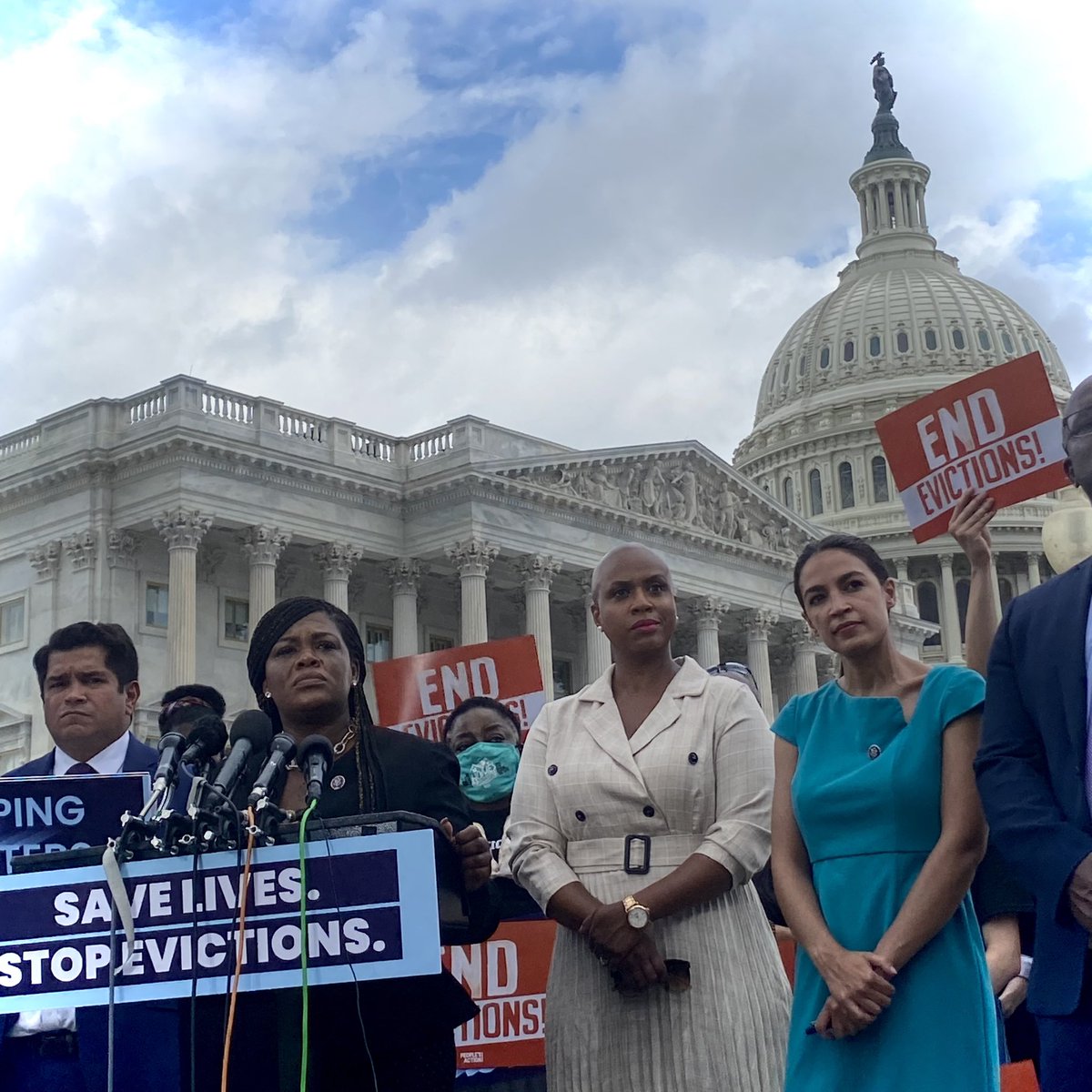 @RepBarbaraLee
Keeping people in their homes is a matter of life or death for millions. Thank you, @RepCori and @SenWarren, for helping lead our effort to extend the eviction moratorium. It can't wait. 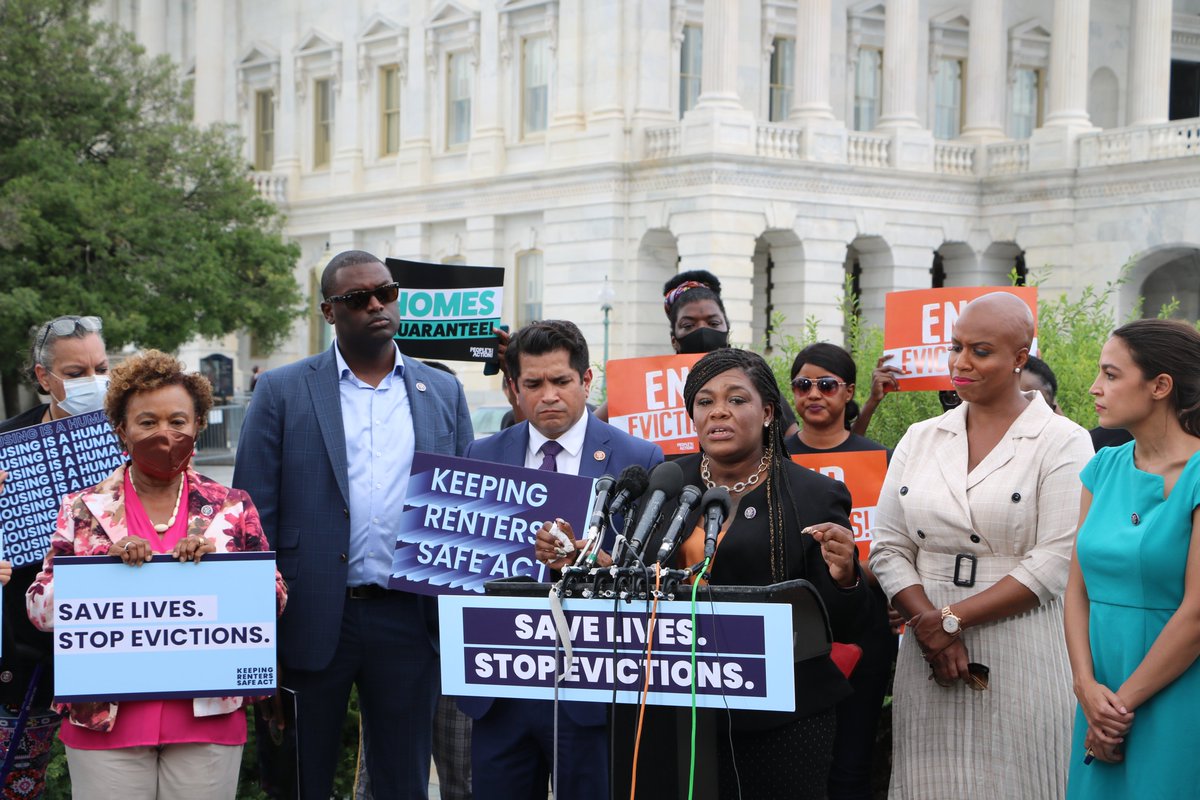 @SenAlexPadilla
In the middle of a deadly pandemic and a growing housing & homelessness crisis, we must do everything we can to keep people in their homes. Proud to join @RepCori & @SenWarren in intro'ing the Keeping Renters Safe Act to protect people from unreasonable & dangerous evictions.
21 Sep, 2021 - 08:35 PM UTC

@RepMondaire
Last month, I proudly stood alongside @RepCori as we fought to keep as many as 11 million Americans from becoming homeless. I’m proud to stand by her today as we continue that fight by introducing the Keeping Renters Safe Act. 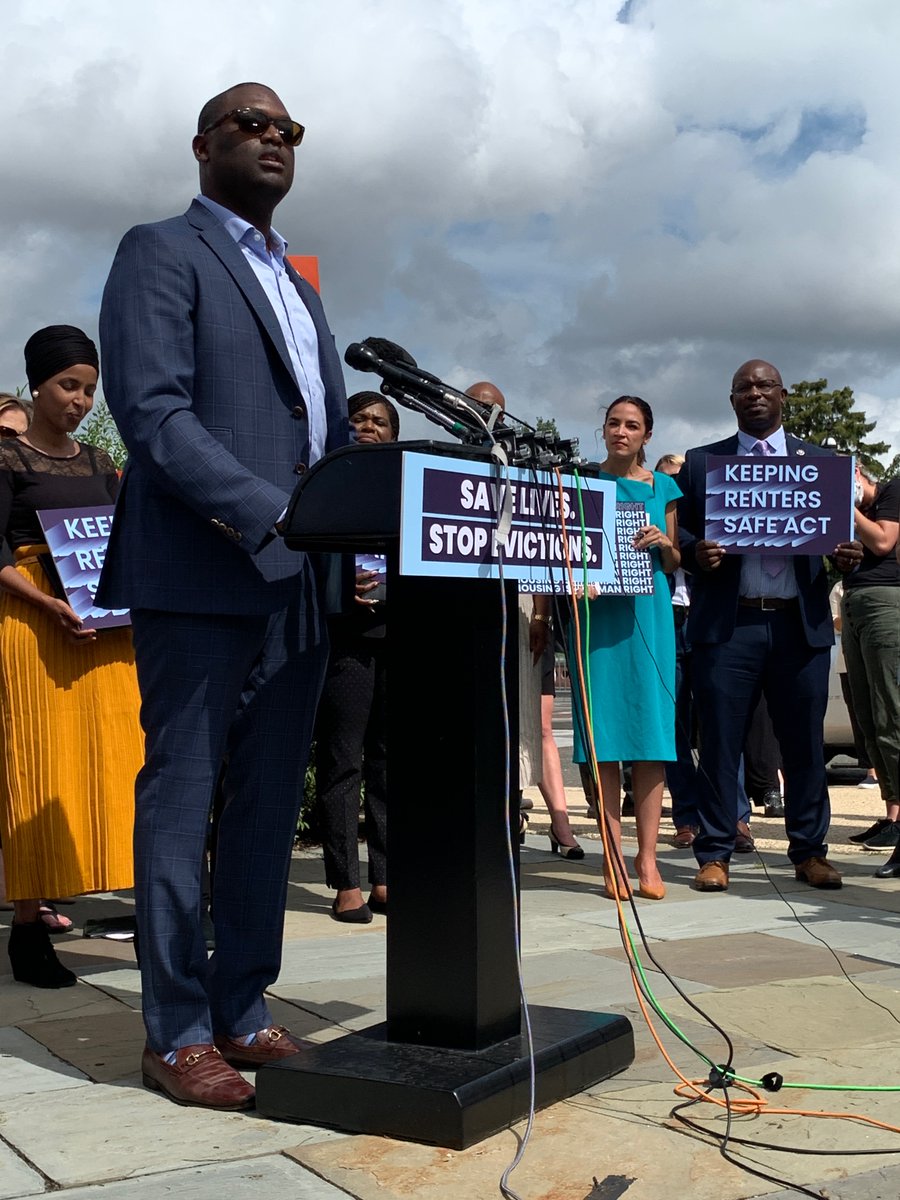 @RepJimmyGomez
Our fight to protect tenants from eviction didn’t end at the Capitol steps. The pandemic is still here, and it’s disproportionately impacting communities of color. Proud to introduce w/@RepCori @RepPressley @RepAOC the Keeping Renters Safe Act to #StopEvictionsSaveLives 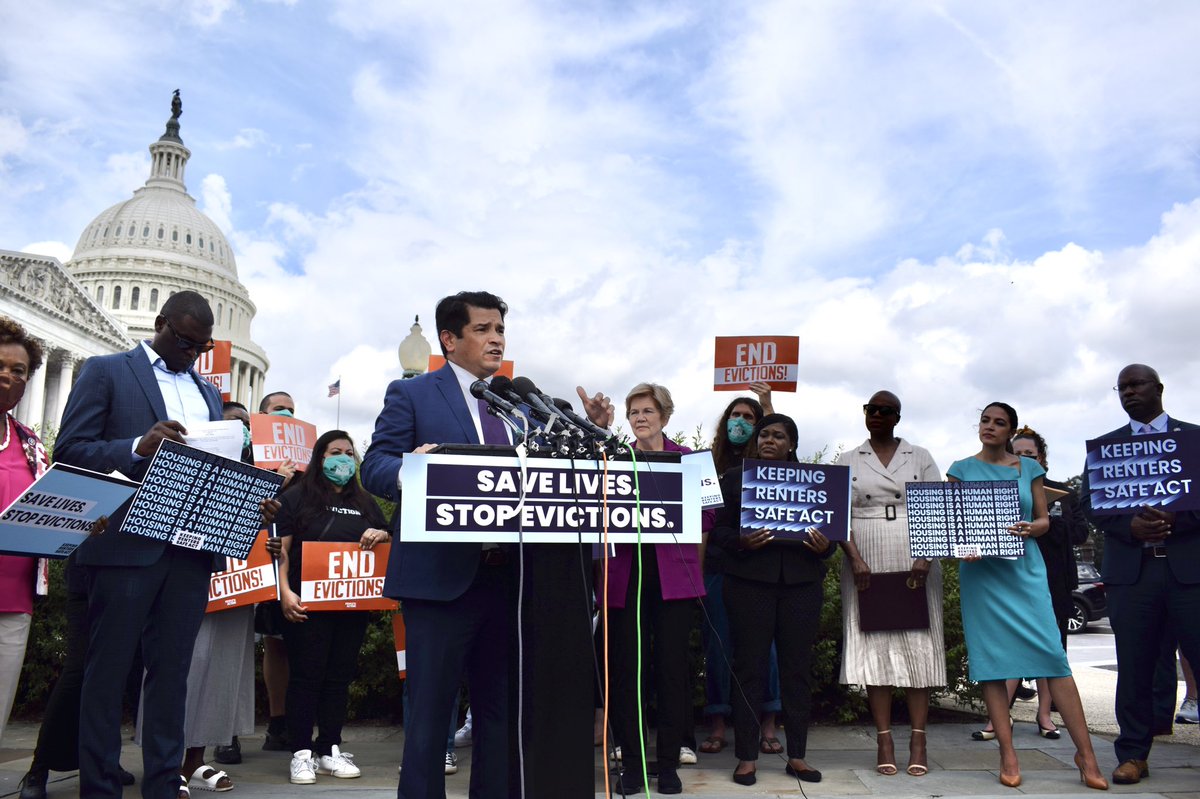 @Rep_Stansbury
Housing is a human right! ✊ Hundreds of thousands are facing eviction across the country with the pandemic. That's why I'm proud to stand with @RepCori, @SenWarren, @RepPressley, @RepAOC, and @PplsAction to introduce the Keeping Renters Safe Act! #nmpol #housingisahumanright 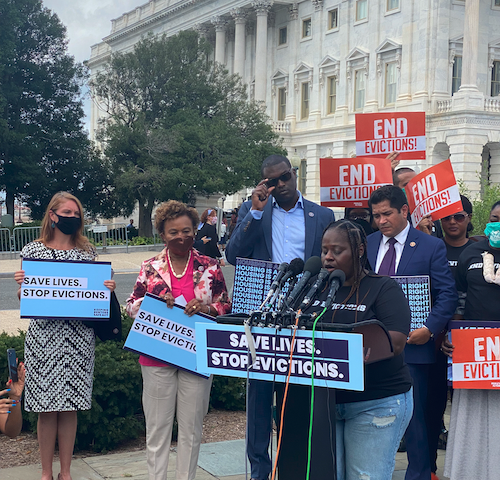 @RepBowman
I'm standing with @RepCori and @SenWarren in support of the Keeping Renters Safe Act, which would allow the CDC and HHS to implement an eviction moratorium to stop the spread of diseases such as COVID-19. We are still in a pandemic and we must protect families everywhere. 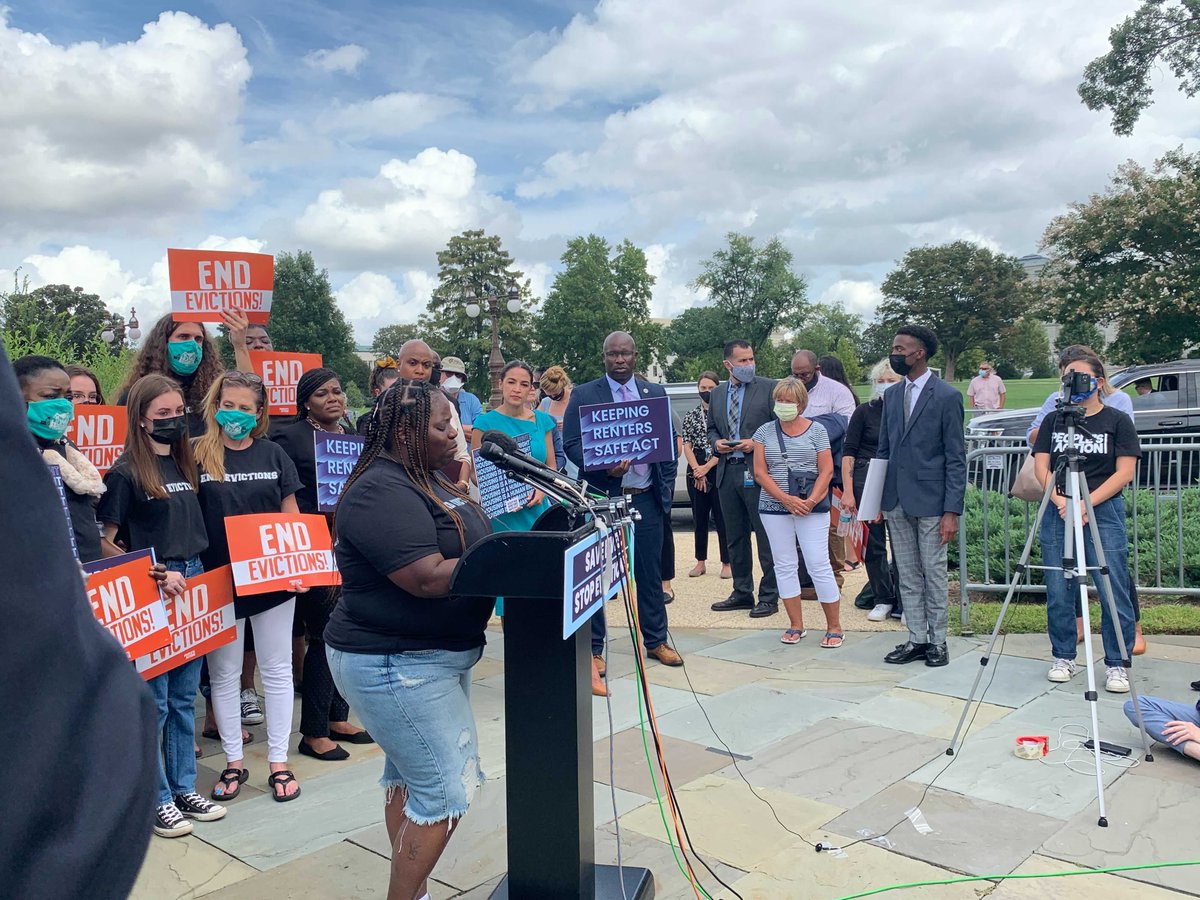 @SenMarkey
The communities that this eviction crisis impacts most—Black, Brown, and immigrant families—have also borne the worst burdens of this pandemic. @RepCori's Keeping Renters Safe Act will extend the eviction moratorium and make sure these families have the security they need. 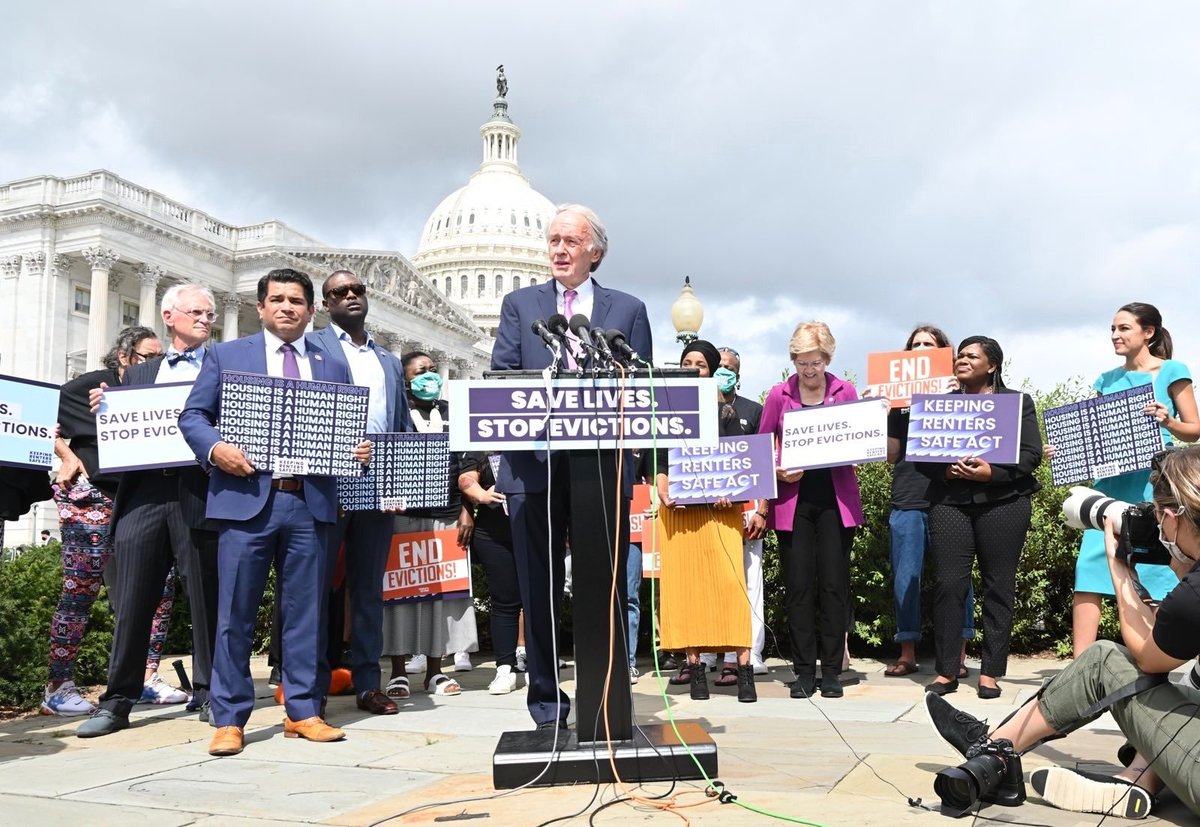 @RepMcGovern
As millions of Americans fear losing their homes, Congress must swiftly intervene. I am proud to join @RepCori and @SenWarren in support of the Keeping Renters Safe Act of 2021. #StopEvictionsSaveLives https://t.co/JdiEpi2j3Y
21 Sep, 2021 - 04:05 PM UTC

@RepEscobar
Following SCOTUS’ cruel decision to block the eviction moratorium, we need urgent action to keep families in their homes for the duration of this pandemic. I’m proud to join my colleague @RepCori and @SenWarren in the fight to #StopEvictionsSaveLives. https://t.co/OeZLMdxEo8
21 Sep, 2021 - 03:10 PM UTC

@RepRaulGrijalva
If we’re going to #BuildBackBetter, we must strengthen SSI benefits for the 8 million Americans who rely on them to survive. I urge @SpeakerPelosi @RepRichardNeal & @SenSchumer to include SSI in reconciliation. #DemolishDisabledPoverty #CareCantWait 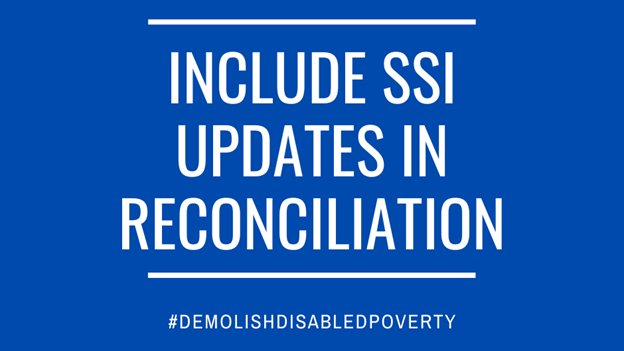 @martyjtweets
New from me: I had the chance to talk with @RepCori last week about her activism in Ferguson, her transition to Congress, the pain of her lived experiences — and the lessons she’s learned from it all. ⬇️⬇️⬇️ https://t.co/K9rGGtlHOl
08 Sep, 2021 - 02:57 PM UTC
@repcori's